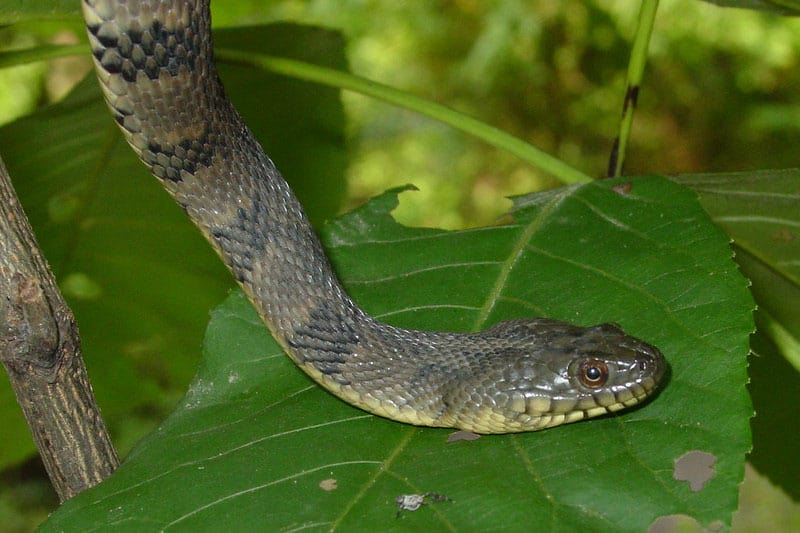 Tennessee isn’t a state known for its abundant aquatic environments. Most people, when they think of Tennessee, and probably thinking of the Appalachian mountains and dense woodlands. Clearly, some people don’t realize just how much water is in Tennessee because the state has 50,000 miles of rivers and streams and about 500,000 acres of lakes, ponds, and marshes. All that water makes Tennessee a haven for both aquatic and semi-aquatic snakes. While there are plenty of snakes living all over Tennessee, this article will be focusing on those that live in or near the water, the water snakes in Tennessee.

9 types of water snakes in Tennessee

The Mississippi green water snake is found in the extreme western portion of the state, where it thrives in the cypress swamps. Living deep in the swamps, these dark, greenish-brown snakes hunt fish, frogs, and tadpoles.

They have distinctive, half-moon shaped yellow markings on their bellies as adults. They like to bask in branches overhanging the water, and they give birth to live young.

They prefer quiet, still or slow-moving water, and are more commonly found in lakes and swamps than in rivers. Amphibians like frogs, toads, and salamanders are their preferred prey, but they will occasionally eat fish as well. These are the only water snakes that, when threatened, will try to escape on land instead of diving into the water.

A subspecies of the banded water snake, these snakes have distinct bands of dark and light brown on their backs, which makes them look much like the venomous cottonmouth. In Tennessee, they’re found in Reelfoot lake and in the counties which border the Tennessee river.

They especially like to hide in thick vegetation, and fish are their favorite food, although they’ll also eat amphibians. Southern water snakes are often mistaken for cottonmouths, and are frequently killed because of this confusion.

These snakes can be found in Western and Middle Tennessee, especially in the Mississippi, Tennessee, and Cumberland river drainages. While they’ll live in nearly any aquatic habitat, they prefer oxbow lakes, rivers and cypress swamps.

You may also like:  9 Examples of Snakes That Burrow (With Pictures)

Slow-moving fish like catfish are the preferred prey items for this species. During the summer months, they become primarily nocturnal. In the winter, they’re much more active during the day.

Northern water snakes have more variation in color than most species, ranging from gray to brown to nearly black in some individuals. Their color tends to darken with age, too. This snake lives throughout the state.

They prefer quiet waters, especially ponds and lakes. You’ll often see them basking at the water’s edge. Fish are their favorite prey, and they eat most non-game species. Amphibians are occasionally hunted, as well. They prefer to run from danger, but when captured they become very aggressive, biting repeatedly.

These slender snakes can be identified by the three pale stripes running down their back. They’re almost always found near water, although they don’t spend as much time in it as the water snakes. They live only in the four counties in the far western part of Tennessee.

Small frogs, tadpoles, and minnows are the preferred foods for this snake. They’re quick and will run into thick vegetation when they feel threatened rather than diving into the water.

Living throughout the western portion of the state, the eastern ribbonsnake is a species of garter snake, and as such can be identified by the three yellow stripes running down it’s back. While they don’t spend much time in the water, they never travel far from it. Heavily vegetated river and stream banks are their favorite places to live and hunt.

Amphibians and fish are their main prey, but these small snakes will also hunt insects. They often flee into the water when in danger, but rather than diving in, they glide on top of the water. 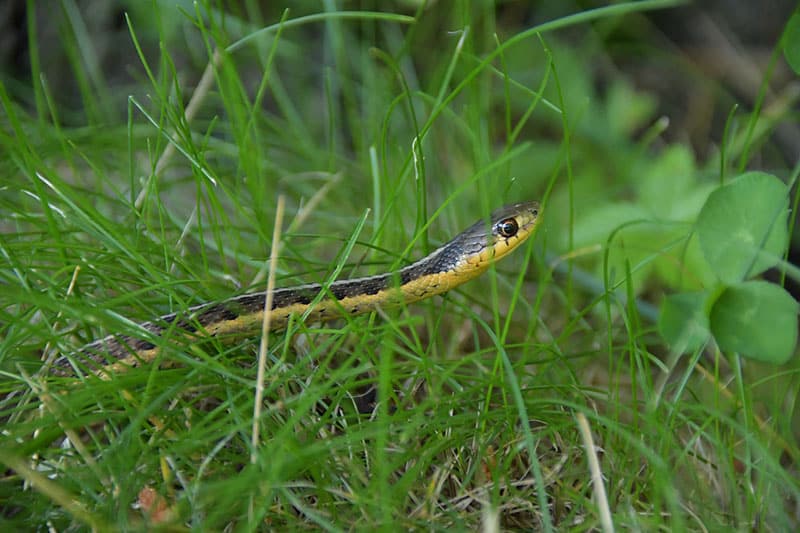 Closely related to the ribbon snakes, the Common Garter Snake can be distinguished from the ribbon snakes by its lighter, spotted coloration. This is the most common snake in Tennessee, and it can be found in all areas of the state. They prefer to live near ponds and wetlands.

Garter Snakes have a varied diet and they’re opportunistic predators, but they prefer to eat frogs, toads, fish, and earthworms. These are the fastest snakes in Tennessee, and that makes them quite difficult to catch.

The Cottonmouth, or Water Moccasin, is undoubtedly the most infamous water snake. These vipers live mainly in the western third of Tennessee, preferring swamps and wetlands to rivers and lakes.

They have thick, heavy bodies with dark brown coloration. The inside of their mouth is bright white, and when threatened they hiss loudly and use their white mouths in a threat display.

While they have a reputation for aggression, these really aren’t especially aggressive snakes. They do not chase people, despite the common myths. In fact, they’re far more likely to hide or run than to attack.

While they are venomous and should be avoided, they also aren’t the vicious, aggressive animals that they’re believed to be. So, if you see one, just leave it alone.