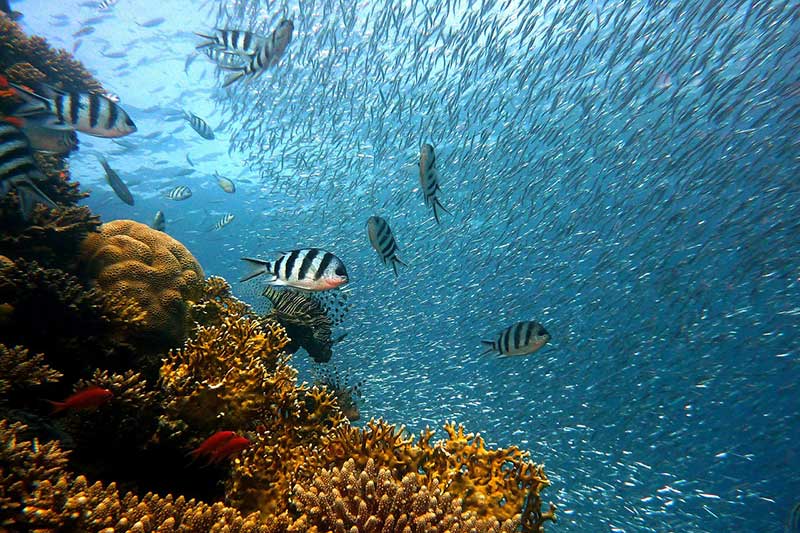 Fish are some of the most diverse types of animals on the planet, with there being close to 35,000 different species! Fish inhabit water bodies whether that be freshwater in ponds, lakes, streams and rivers or saltwater in oceans- or sometimes both. Regardless of the sheer number of fish species, all species can be broken into three main taxonomic groups or superclasses. In this article, we will cover the three types of fish.

These groups are the bony fish, the cartilaginous fish, and jawless fish. We will dive into these three types and what makes them different from one another. We’ll also list some examples of each type of fish, with pictures, to help you better understand the differences.

The 3 types of fish – with examples

What are bony fish?

Bony fish make up the most diverse group of vertebrates and types of fish on the planet, and there are over 28,000 species! As the name implies, bony fish are in fact bony. Meaning they have bones. To be more specific, their bones are made of bone tissue similar to the tissue that makes up our own bones that contain collagen, calcium and other minerals.

What makes bony fish different from other fish?

One telling characteristic of this group is the presence of overlapping scales covering the body. While most people assume that all fish have scales, this is actually a characteristic unique to the bony fish. These scales protect the body as well as a layer of mucus secreted from mucous glands.

Additionally, bony fish have a swim bladder located inside the body. Swim bladders are essentially evolved lungs that their primary function is to help regulate buoyancy. This allows fish to maintain their position without floating or sinking or requiring too much effort from paddling to do so.

Bony fish also have an operculum, which is a large disc-shaped flap that covers and protects the gills. When they open their mouths, this pushes water through their mouth and over their gills, which forces their operculum open.

Most often when we think about a fish, we picture a bony fish. The following types of fish are examples of bony fish, that you may have heard of. 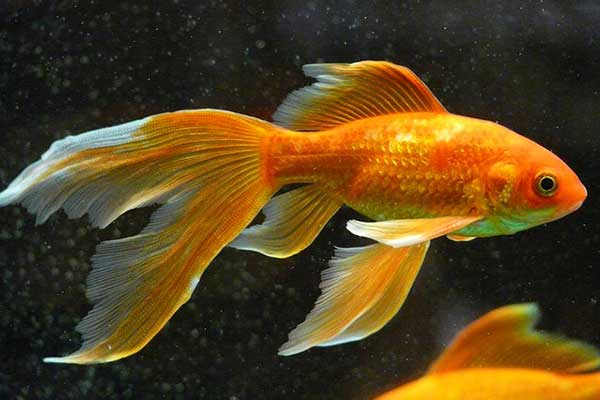 Most people are familiar with Goldfish and many people have kept them as pets. They are commonly thought to be unintelligent, almost mindless fish, however they are actually very socially intelligent. Owners may notice that their Goldfish excitedly swims towards them when they approach the tank. In the wild, they are found in freshwater bodies in East Asia. 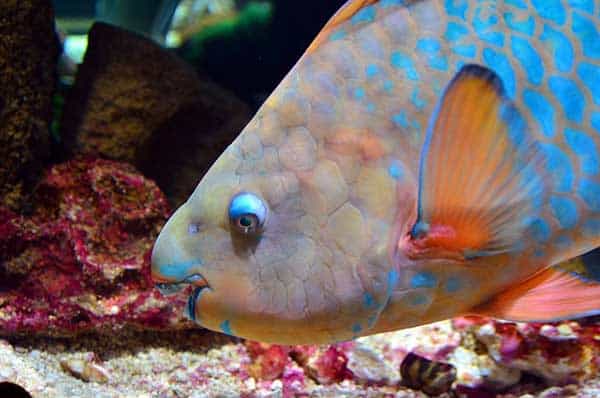 There are nearly 100 species of Parrotfish, all of which tend to inhabit tropical or subtropical waters. Parrotfish are typically very colorful, with pink, purple, green and blue scales covering their body. They get their name from their jaws which form almost like a parrot-like beak that they use to crush and scrape coral while feeding. 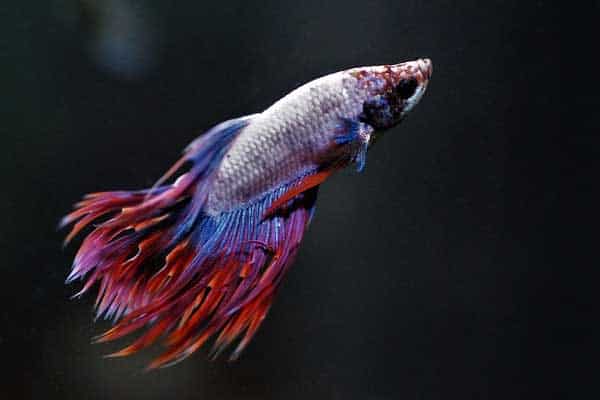 Betta fish, also known as Siamese fighting fish are a species of freshwater fish that are commonly kept as pets. They are well known for their brightly colored, large, flowing fins as well as their territorial nature. Males will actually fight to the death if housed together. In the wild, these fish are found in stagnant or slow moving freshwater bodies in Southeast Asia.

The Ocean sunfish is arguably the heaviest species of bony fish in the world and on average can weigh up to a whopping 550 to 2,250 pounds! They are strange looking fish that are large and vertically flattened with a long fins protruding from either side of their body. They occur in all tropical and subtropical oceans throughout the world. 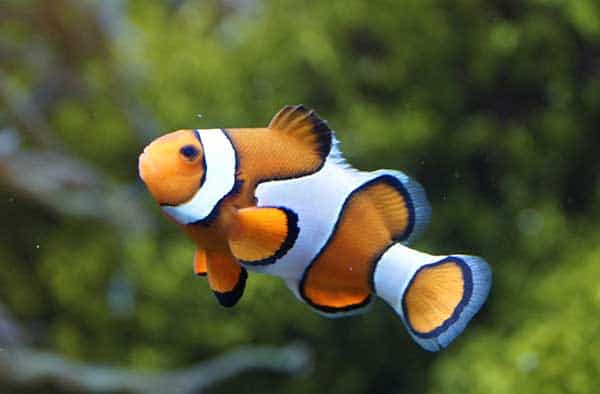 It was a clownfish that was featured in the popular Disney movie, “Finding Nemo”. There are actually many different species of clownfish, but they tend to all share a similar barred pattern. Clownfish are tropical fish and actually depend on anemones for shelter where they will hide from predators or other threats.

Atlantic salmon are a popular sport-fish and menu item at seafood restaurants. Like other species of salmon, they are born into a freshwater system but will travel to the sea to spend most of their life. Salmon then return to freshwater to breed and reproduce. 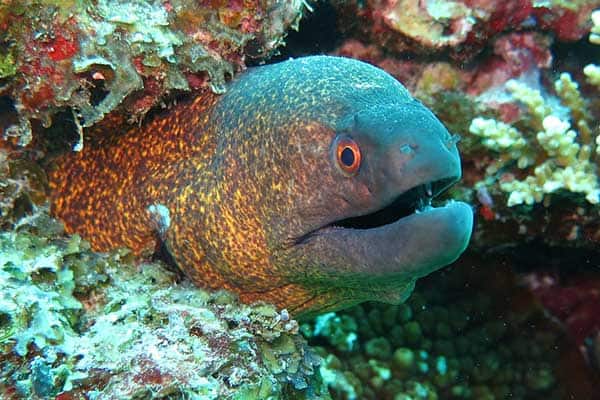 There are nearly 200 different species of Moray eels, however most people associate Moray eels with being bright, lime green which is true of some species. These fish tend to have large jaws with many sharp teeth, some of which stick out of their mouth and can give them an almost sinister look.

Named for it’s impressive size, the Atlantic goliath grouper is an impressive saltwater fish that can grow up to 8 feet and length and nearly 800 pounds. They tend to inhabit coral overhangs and underwater caverns. They occur in tropical and subtropical waters, however large concentrations of them can be found in the Caribbean.

What are cartilaginous fish?

Cartilaginous fish are vertebrates, and types of fish with skeletons made out of mostly cartilage. Cartilage is a strong, yet flexible and lightweight material made out of several proteins and fibers. In many animals, humans included, cartilage can be found throughout the body as a connective tissue between bones and joints. Humans also have cartilage in their nose, ears and ribcage.

Having a skeletal system made up of cartilage can be an advantage for these types of fish because the lightweight nature of their skeleton allows for them to travel quicker and further while expelling less energy. Cartilage is also very flexible, meaning that these fish can quickly change directions, bend and turn, making them more agile.

This group of fish have scales, but these scales are different from those of bony fish. These scales are called dermal denticles and are essentially very tiny teeth and gives the skin a rough, sandpaper like texture.

Unlike bony fish, cartilaginous fish lack an operculum. Instead, they have 5-7 gill slits that are obvious and present on the body. Additionally, this group of fish lacks a swim bladder and often must mechanically adjust their buoyancy by adjusting their fins.

Below are several examples of cartilaginous fish, however for even more examples you can check out this article. 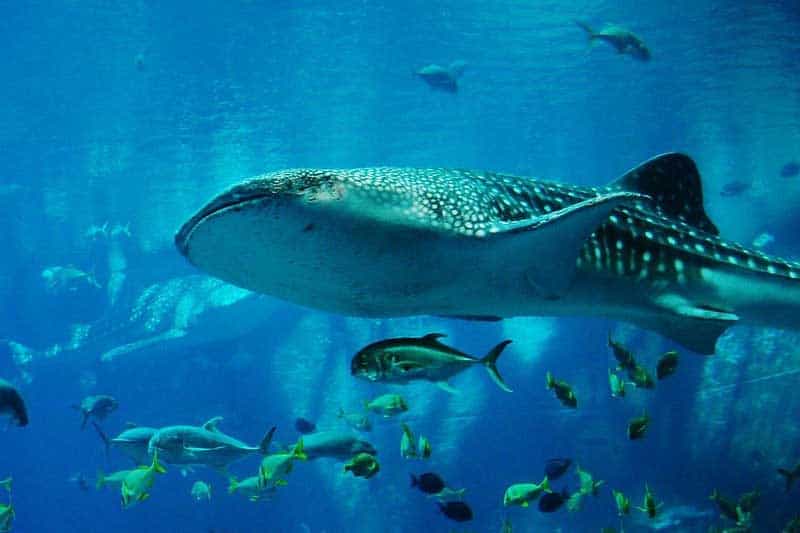 Whale sharks are the largest fish in the world by length and can grow as long as 62 feet in some cases, however most are between 40 and 50 feet. Despite their large size, these sharks are completely harmless and are actually filter feeders that eat microscopic invertebrates called plankton.

Skates, like the Thorny skate look very similar to stingrays due to their flattened bodies and they are closely related. However, skates lack the venomous barb that stingrays have and are completely harmless. Thorny skates get their name from the small thorn-like scales on their back. They are native to the Atlantic Ocean and prefer cooler water temperatures. 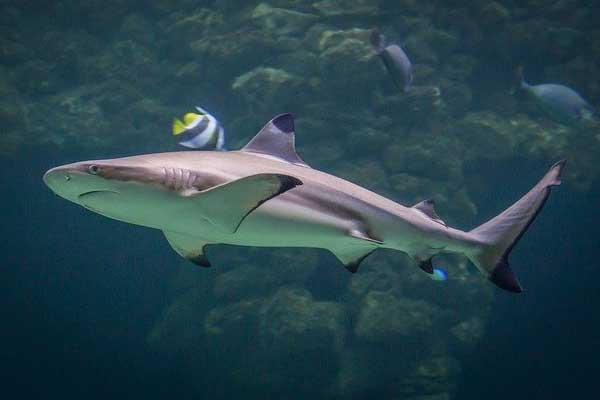 Blacktip reef sharks get their name from the black markings on the tips of their fins. They are a small shark, typically growing to be about 5 feet in length. They occur in tropical and subtropical waters of the Indo-Pacific. Blacktip reef sharks tend to stick to very shallow waters and thrive on coral reefs. 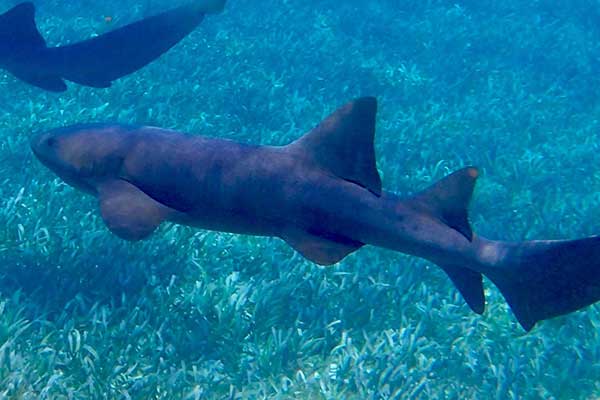 While most sharks steer clear from people, Nurse sharks are fairly common and seemingly unbothered by people swimming near them. It is not necessarily uncommon for snorkelers or divers to encounter Nurse sharks while swimming. This species of shark is widespread and can be found in warm waters in the Atlantic and Pacific ocean.

Bonnetheads are a small species of hammerhead shark, however they have a more rounded or shovel shaped head than their relatives. They typically only grow to be 2-3 feet long. Interestingly enough, they are known to be the only species of omnivorous shark and consume both other living organisms and plant material.

The Greenland shark is an impressive, prehistoric looking shark. This species is capable of living very long lives, with some individuals living to be between 300 and 500 years old! They are incredibly slow moving which allows them to maintain a very slow metabolism. They are secretive sharks and live deep in the Atlantic and Arctic ocean.

The Sand tiger shark looks like a stone-cold killer with it’s sharp, protruding teeth. However, these sharks have never been involved in any human mortalities and they tend to be uninterested in people. They can be found in tropical and subtropical waters along the coast of all continents except for Antarctica.

Bat rays are not at all related to bats, however they get their name from their wide, wing-like fins and darkly colored skin. They are native to the cool waters of the Pacific and can be found along the coast of Oregon and California. Like other stingrays, they have venomous barbs on their tail.

What are jawless fish?

The Jawless fish are a relatively small group of only about 120 species. This type of fish is very unique, due to their body shape. The jawless fish group includes lampreys and hagfish, which are long, eel-like creatures with a disc shaped mouth that have rows of teeth that help to create almost a suction cup.

Jawless fish are covered in skin rather than the overlapping scales seen in bony fish. Some species have very productive mucous glands and have a thick layer of slime covering their body.

Aside from their circular mouth, jawless fish are easily identified by their gills, which are actually more like small holes or pockets that run in a straight line along their body, rather than parallel gill slits. Additionally, they tend to lack paired fins and instead have dorsal and tail fins.

While they are different from cartilaginous and bony fish in a lot of ways, they actually have one major characteristic in common with cartilaginous fish which is the presence of a skeleton made out of cartilage.

Here are a few types of fish that are also examples of jawless fish.

Sea lampreys are parasitic fish and will suction onto other fish to feed on the tissue of their victim, earning them the nickname “vampire fish”. They are also an invasive species in the Great Lakes and have been linked to population declines of native fish. They are able to inhabit both salt and freshwater and are very hardy and resilient fish.

There are several species of hagfish, also known as slime eels. They get this name from their very active slime glands that produce large amounts of thick, sticky mucous. In fact, when agitated by being handled, they can produce up to 5 gallons of this substance. 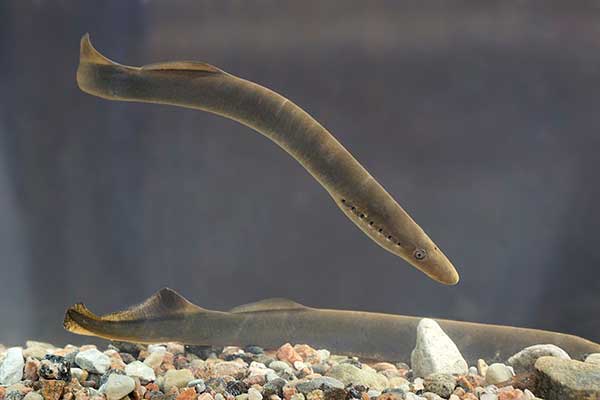