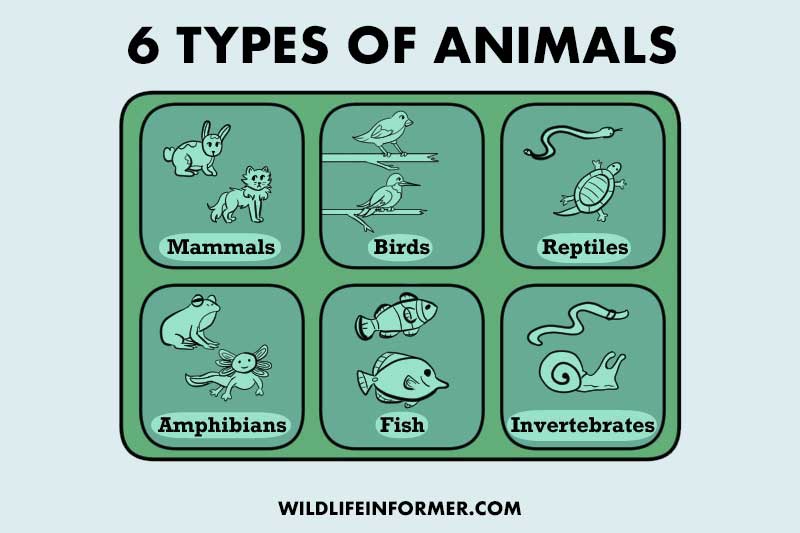 There are millions of different species of animals, and the number of species is actually changing all the time due to scientists gaining new information. What remains constant, however, is the six main groups or classes of animals. In this article, we’ll go over the six main types of animals and what makes them so different from each other.

Let’s not waste any time and get right to it!

The 6 types of animals

The six main taxonomic classes of animals are:

We should all be familiar with mammals because us humans are mammals too! Mammals are arguably the most “advanced” class of animals, with many species being very intelligent. The most common characteristics associated with mammals include having hair or fur, giving live birth to offspring, producing milk via mammary glands and being warm blooded and having sweat glands.

However, there are exceptions to every rule and not all mammals share these common characteristics. For example, some mammals lay eggs. But all mammals have the presence of three inner ear bones, hair or fur, and all mammals produce milk through their mammary glands. These traits are unique to the Mammalia class.

Chimpanzees, or chimps, are not so distant relatives of humans and are an excellent example of how intelligent mammals can be. Chimpanzees are an endangered species that are found in tropical, sub-saharan Africa. These great apes are very social animals and live in groups with other chimps. These groups often form male-dominated hierarchies.

You can find more examples of mammals here.

Most of us are lucky enough to encounter wildlife such as birds on a regular basis. Birds are a very diverse group of animals with some birds growing to be no larger than a coin, and some growing as tall as up to nine feet tall! One thing that is consistent across birds is the presence of plumage or feathers.

Birds are closely related to reptiles and like reptiles, they actually have scales that cover their legs and feet. And a bird wouldn’t be a bird without a beak! Birds have different beak shapes that have evolved over time in response to the type of food they eat. For example, hummingbirds are pollinators and drink nectar from flowers. Birds also have a different body plan from most animals and have a very strong, but lightweight skeleton, perfect for flying.

Additionally, all birds lay hard-shelled eggs, some of which we enjoy with our breakfast! Following laying their eggs, most species of birds will sit on their nest to incubate their eggs and protect their young. Most birds nest in trees, but some nest on the ground.

The national bird of the United States, the Bald Eagle is a bird of prey that can be found throughout almost the entirety of North America. They have a large, hooked beak that is perfect for shredding apart fish that they catch with their long talons. Bald Eagles are thought to mate for life and will often return back to where they were born to lay their own eggs. This apex predator is king of its domain.

Head here to learn about the 6 types of birds.

The Reptilia class includes turtles and tortoises, crocodiles and alligators, lizards and skinks and snakes of course. Reptiles typically have a bad reputation, likely due to the element of danger that some venomous snakes pose.

In general, reptiles are associated with being less intelligent than some of the other animal groups. However, these animals have many amazing adaptations that make them unique and special in their own right. Reptiles are covered in scales made of keratin (the same protein that makes up our hair and nails) which are important for retaining heat for these cold-blooded creatures. Some reptiles, like box turtles and tortoises also have a shell made of keratin that acts like a suit of armor.

Reptiles are called ectotherms, which are organisms that rely on their surrounding environment to regulate their body temperature. In other words, reptiles are not able to shiver to warm themselves up or sweat to cool themselves off. Instead, they need to take shelter when they get too hot and bask in the sun when they are cold.

While most people assume that all reptiles lay eggs, there are actually three different ways that reptiles give birth. Some reptiles give live birth, some lay eggs, and some give birth through a combined approach where eggs form and hatch inside the mother.

The Green Sea Turtle is an endangered species of sea turtle that can be found in tropical and subtropical waters worldwide. These gentle beings are unfortunately threatened by poaching, habitat loss, pollution, and by-catch where they often find themselves tangled in fishing nets and lines.

For more examples of reptiles, check out this article

Amphibians are often lumped in with reptiles, but they are very much their own group of animals! The amphibian class includes animals like frogs and toads, newts and salamanders and a strange group of snake-like amphibians called caecilians.

These animals all have moist, scale-less skin that they use for water absorption and gas exchange within their environment. Because their skin is so permeable, they are very sensitive to environmental toxins. Like reptiles, amphibians are also ectotherms and are not able to regulate their own body temperature.

One key characteristic that amphibians share is their complex life cycles that include larval stages. Many amphibians reproduce through external fertilization and all amphibians are oviparous- meaning they lay eggs rather than giving live birth. Many species attract mates through vocalizations (croaking and ribbiting).

Many species of frogs or toads are very poisonous due to the presence of toxin glands on their skin. In fact, one species of frog, the Golden Poison frog is arguably one of the most dangerous animals in the world due to the incredibly potent poison they secrete.

The animal kingdom is broken up into two large groups- vertebrates (all of the other animal classes found on this list) and invertebrates. Invertebrates are all living organisms that lack the presence of a spinal cord. This includes a wide range of animals such as jellyfish, insects, worms, molluscs, crustaceans, cephalopods such as octopuses and squids and even coral.

Invertebrates are absolutely the most diverse group of animals on the planet. It is estimated that around 97% of all living animals in the world are invertebrates- most of these being insects. That being said, scientists believe that there are millions of more species left to be discovered so it is difficult to even begin to estimate how many invertebrates there really are!

Invertebrates can be found literally all over the world and in all sorts of environments. They are typically associated with being simple, unintelligent beings which can be the case for many species, however invertebrates like octopuses and cephalopods are incredibly intelligent. 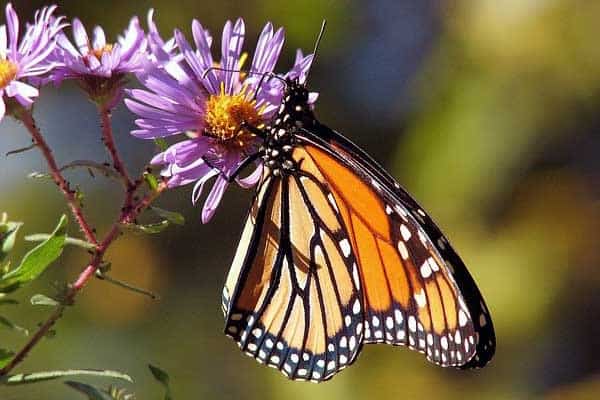 The Monarch Butterfly is a beloved invertebrate in North America, known for their striking orange and black wings. These butterflies are prominent pollinators and are capable of making tremendous migrations. Every fall, monarchs travel thousands of miles from northern and central parts of the United States and travel south to southern states and Mexico.

For more examples of invertebrates take a look at this article.

Everybody knows that fish are aquatic animals that inhabit oceans, freshwater bodies or both. But there are more characteristics that make a fish a fish. The main defining trait associated with fish is the presence of gills that they use to breathe underwater. Some other invertebrates and amphibians also have gills to breathe underwater.

Like reptiles, most fish are covered in scales. However, fish scales are different in form and function from reptile scales. Fish scales are often very reflective and help fish to camouflage themselves and divert predators.

The Atlantic Bluefin Tuna is a large, highly mobile fish found in the Atlantic Ocean and Mediterranean Sea. These fish can grow up to be nearly 1,500 pounds and over nine feet long! Bluefin Tuna are highly sought after by sport-fishermen which has likely led to the overfishing of this species.

Check out this article to learn about, and see some examples of the 3 types of fish.