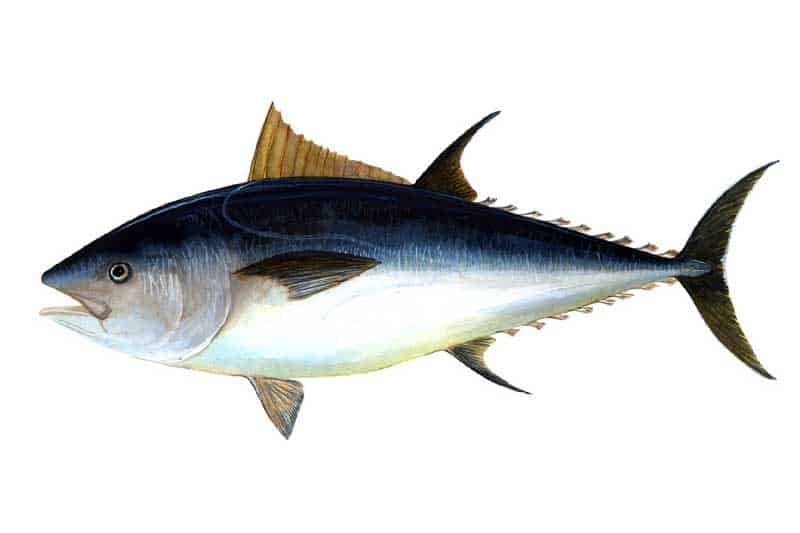 The Atlantic Bluefin Tuna is one of the open ocean’s fastest and strongest predators. They’re more well-known for their role as one of the most popular seafoods in America and Japan, and are the target of several small and large-scale fisheries throughout its range. Here are a few fun facts about Bluefin Tuna to help us appreciate it far beyond its capacity to be food.

1. Yes, they are a predator

The Bluefin Tuna will eat a wide variety of prey, but they prefer pelagic (open ocean) fishes and invertebrates that they can swallow whole.

This, paired with reaching lengths of nearly 15 feet, makes the Bluefin Tuna especially sought after by deep-sea fishermen. There have been specific fish that are tagged by scientists to have supposedly reached this weight, but none have been caught and recorded yet.

3. They start out as nearly microscopic larvae

Like many open ocean bony fishes, they begin life no more than a few millimeters long. It only takes three to five years for them to reach lengths of three feet and begin being sexually mature.

4. Their only natural predators are toothed whales and some open-ocean shark species

Once these tuna reach their full size and maturity, they go much higher on the food chain than when they were smaller. Only something much larger, and generally further from their own natural range than usual, can take one down.

These migrations correspond with their spawning behavior and their food needs. There are two populations of Atlantic Bluefin Tuna, with one reproducing in the Gulf of Mexico and the other in the Mediterranean Sea.

This is the most common reproductive behavior for tuna. Several females and several males release millions of eggs and sperm into the water column at the same time. This increases the likelihood that the eggs will be fertilized and decreases the chances they’ll be eaten by egg predators.

Unlike most cold-blooded fish, the Atlantic Bluefin has a specialized blood vessel structure called a countercurrent exchanger that allows them to maintain a body temperature higher than the surrounding water. This is to allow them to hunt in colder water quicker and more intelligently.

8. They need to be constantly moving

Just like sharks, the Bluefin relies on constant water flow over their gills in order to obtain oxygen. They’ll also increase oxygen intake by swimming with their mouth open.

9. It’s been speculated to be an endangered species

The Atlantic Bluefin was formerly common in the Black Sea and off the coast of Brazil, but it hasn’t been observed in significant numbers in decades. This has led to scientists believing it should be classified as endangered and highly vulnerable to extinction.

Despite the potential classification as endangered, fisheries managers continue to allow commercial fishing to target it. It’s a highly lucrative fish for sushi and is highly targeted by fishermen.

This is only from the current data, and it’s been theorized that they could live as long as 50 years if left to their own devices.

12. Females can produce up to 10 million eggs a year

Most of those eggs don’t end up getting fertilized, and fewer still make it to adulthood. The purpose of producing this many is to increase the odds of as many offspring surviving as possible.

13. Eggs hatch after 2 days of being fertilized

This is another way the species ensures the next generation survives. Less time in the egg means less time left defenseless.

An apex predator is one that’s at the top of the food chain. Despite certain species of toothed whales and sharks that are capable of eating one, throughout most of their range they swim almost entirely unchallenged.

15. The largest recorded specimen was caught off of Nova Scotia

This area is well known for its gigantic Atlantic Bluefin Tuna. This particular specimen ended up weighing 1,497 pounds and was 12 feet long.

16. The longest recorded contest between man and fish was also in Nova Scotia

In 1934, it was documented that six men took turns fighting an 800-pound tuna for nearly 62 hours straight!

The Bluefin Tuna is built for speed. They have strong core muscles used for power and a streamlined “torpedo” shaped body to reduce water resistance.

This incredibly large tuna is capable of diving to great depths in search of invertebrates, such as squid and crustaceans.

19. Spawning Bluefins can be seen from the air

The Atlantic Bluefin will group together in large concentrations to spawn, and this is also when they’re most vulnerable to commercial fishing, especially in the Mediterranean.

20. Ranching is their biggest threat

Ranching is when fishermen will capture wild tuna in order to breed them in a controlled environment. Because they are taken from the wild before they’re old enough to reproduce, this drastically reduces the number of viable wild adult tuna to repopulate the oceans.

Bluefin Tuna sashimi is a particular delicacy in Japan. Fish with red flesh used to be looked down upon in Japanese culture, but since the 1930s it’s been viewed as highly desirable and sought after.

22. Efforts are still being made to conserve this tuna

Even though commercial fishing is more lucrative than ever, the International Commission for the Conservation of Atlantic Tunas is working towards stricter fishing limits. Despite the support and concern for the populations of this fish, the National Oceanic and Atmospheric Administration (NOAA) still refuses to list this tuna as an endangered species, despite the evidence of shrinking populations and overfishing from commercial fishing and ranching.