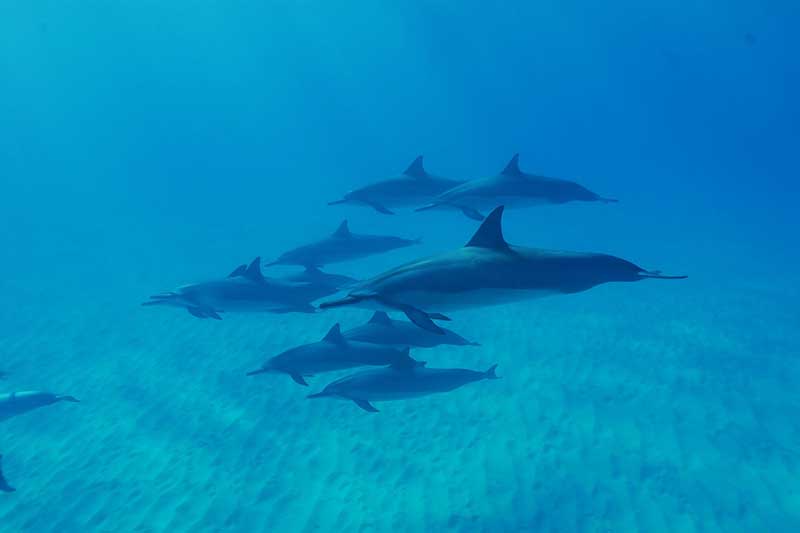 Hawaii is well known for its tropical beaches and crystal clear waters. In these waters, one of the most popular tourist attractions is dolphin watching, and it’s no wonder why. These majestic animals are a large part of Hawaiian culture. Don’t be confused if they’re called by another name in Hawaii though. They’re often misidentified as “porpoises” since the word dolphin usually refers to the Dolphin Fish, or as mainlanders call it, the Mahi Mahi. If you’re planning on taking a trip to these amazing islands, here are the species of dolphins in Hawaii you’re most likely to see and some tips for how to identify them.

The 8 species of dolphins in Hawaii

This is the dolphin most commonly seen by visitors to Hawaii, as they frequent the shores during the daytime after nocturnal forages. It’s named for the way that it has the ability to “spin” its body around as many as six times when it leaps out of the water. This also makes it a favorite for tourists as it makes for spectacular photos.

The best place to view these animals in their natural habitat is the island of Oahu, as well as the Kona side of the Big Island. Snorkel swimming is the most popular and can be done year-round on Hawaii’s tropical reefs.

The Spotted Dolphin is easily confused with the Spinner dolphin, and at first glance it can be difficult to tell them apart. However, upon closer inspection, you can see the spots that give it its namesake.

The end of their rostrum, also known as their “beak”, is white tipped, and mature animals have a spotted color pattern on the body that once you see it, you’ll be unable to miss it. The most common subspecies near the islands is the pantropical spotted dolphin, although other varieties have habitats all around the world.

The Bottlenose Dolphin is considered to be the most beloved and most instantly recognizable of ocean animals. They’re generally larger than the Spotted and Spinner Dolphins, as well have a uniformly gray coloration and a thicker and blunter rostrum.

These are incredibly intelligent animals and very high on the oceanic food chain and have been known to also be the most playful. They’ll commonly follow boats around in order to surf on their wake. They also prefer to be by the shores and along the reefs of the Hawaiian islands.

These are the third-most frequently encountered species of toothed whale on boating trips but are less seen along the coastlines as they prefer the deeper waters. Rough-toothed Dolphins are capable of being submerged for as long as 15 minutes at a time, which is a long time for an animal of their size.

You may also like:  Woodpeckers in Vermont (6 Species With Pictures)

As they’re generally very social animals, they’ll often come up to investigate boats, especially guides that consistently interact with their pods. These are a year-round dolphin and are commonly found “bow riding”, or riding the wake of boats through their territory.

Even though this animal has “Whale” in the name, it’s still a part of the dolphin family and is another frequently encountered aquatic mammal. The Pilot Whale is incredibly large with a bulbous head that is easily identifiable.

Pilot Whales are found around all the islands in Hawaii and are most well known for their “loafing groups”. These creatures will gather in groups from 12 to 30 animals and simply float on the surface after a long day of hunting.

It’s dark grey in color and like the Pilot Whale, also is not a whale and is in fact a dolphin. All dolphins are actually whales, but not all whales are dolphins. They get their name from the similarities between the skulls and teeth of the Orca and the False Killer Whale.

The False Killer Whale is the most social of all the whales, going as far as to share prey with one another and, if you’re lucky, they’ll offer food to boaters and divers as well. They’re found usually around the Northwestern Islands year-round.

There are more Short-beaked Common Dolphins than any other dolphin species in the warm-temperate portions of the Atlantic and Pacific Oceans. They prefer the shores and the reefs along all the islands, generally on the sides closest to the mainland.

The color pattern on this dolphin is unusual for a dolphin. Their back is a dark grey ranging to black with a white underbelly and they have a light grey, yellow, or gold hourglass pattern on both their sides. They’re found year-round and are rarer than many of these other species as they’re much shyer of boats and people.

The Striped Dolphin gets its name from its coloration, like most of the family. Their underside is blue, white, or pink and has two more black stripes running across the back from their eyes to their flipper.

The dolphins in the Pacific near the Hawaiian islands are unique in that they display migration patterns that others in other regions don’t. This means that the best time to see this more elusive dolphin is around the islands during the late Spring and Summer months.