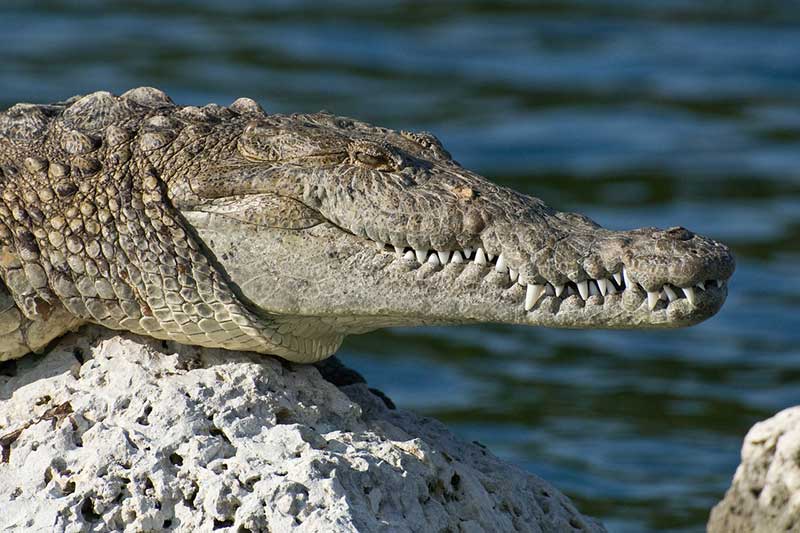 The American crocodile can mostly be found in the state’s southern portion because they live in brackish or saltwater rather than freshwater. The most common habitat type for finding crocodiles in Florida is ponds, creeks, and mangrove swamps. Before going out to see some crocodiles along the coastline of Florida, read these need-to-know facts.

Crocodiles do not want to interact with humans and will naturally avoid them when possible. If you come across a crocodile sunning itself in Florida and you startle it, you’ll likely see it run into the water. While they usually are very stealthy when moving around, they will enter the water with more splashing if you startle them.

Because of this, you might be surprised or scared, but, in this case, the best thing to do is give the crocodile plenty of space. If you continue to go towards the crocodile, you’re more likely to get bitten or have a confrontation with the animal.

Crocodiles can often be found sunbathing with their mouths open to retain as much heat as they can. This is usually a sign they are sleeping or resting, which will make them more likely to be alarmed by your presence. Therefore, exercise extreme caution when moving around a crocodile in this position.

2. Distinguishing Between the American Crocodile and Alligator can be difficult

Further, the American crocodile has a narrow snout compared to the alligator, and when the crocodile closes its mouth, you can still see its fourth tooth on the lower jaw. Crocodiles are often lighter in color with gray to green skin; however, their young sometimes have dark stripes covering their bodies.

These differences between the two species will help you navigate the crocodilians in the Florida waterways. It’s important to note that you should always avoid close contact or interaction with the animal if you encounter a crocodile or alligator.

The American crocodile male will begin courting a female between January and February each year. These rituals often last days and can be very intense. The male will start courting the desired female by continuously slapping his head in the water. This motion can cause quite a lot of noise and commotion in the water.

If the female is interested in the male, she will posture to him by raising her snout into the air and arching her tail up. If the courting continues, the two individuals will rub their snouts together before submerging into the water.

The female will then start to nest between April and May. All nests are made on land out of the soil. During this time of year, be extremely careful near waterways as you may be likely to come across a crocodile nest. The female will create her nest out of harm’s way past the high tide mark, making it even more likely to be disturbed by humans.

If you find a crocodile nest, it will have between 20 and 60 eggs, and the best thing you can do is leave it be. After incubating for 85 days, the female will dig up her nest to carry her babies to the water. This time of year, it can be more likely to run into crocodiles, and the female is more likely to be aggressive and stand her ground rather than run away. If you come across a nest and the female is nearby, give it plenty of space to avoid unnecessary interaction.

4. The American Crocodile Faces Many Threats

One of the first causes of the American crocodile’s decline was overhunting. The species were killed for their hides in Florida for 30+ years legally, starting around 1930. This did significant damage to Florida’s genetic diversity and breeding, which caused a massive drop in crocodile numbers.

Today, the American crocodile is still illegally hunted; however, they are also threatened by the destruction of their habitat. More habitat is being developed with the increasing human population in Florida, reducing available food and killing any eggs currently incubating in the area. This massively contributes to them being listed as vulnerable by the IUCN Red List.

As far as crocodile nests go, they are at high risk of predation by species like raccoons, birds, and crabs. When these nests get predated, an entire year’s worth of babies from one female gets killed, which is a major hit to Florida’s crocodile population!

5. The American Crocodile is Protected in Florida

Due to these threats, the American crocodile is protected under a few orders. The Federal Endangered Species Act covers the species in addition to Florida’s Endangered and Threatened Species Rule. This keeps the species from being infringed on or hunted (legally); however, illegal activity harms the crocodiles.

As the only state in the United States with the American crocodile, Florida does make an effort to keep the species thriving in their saltwater landscapes to ensure they do not continue to fall in numbers.