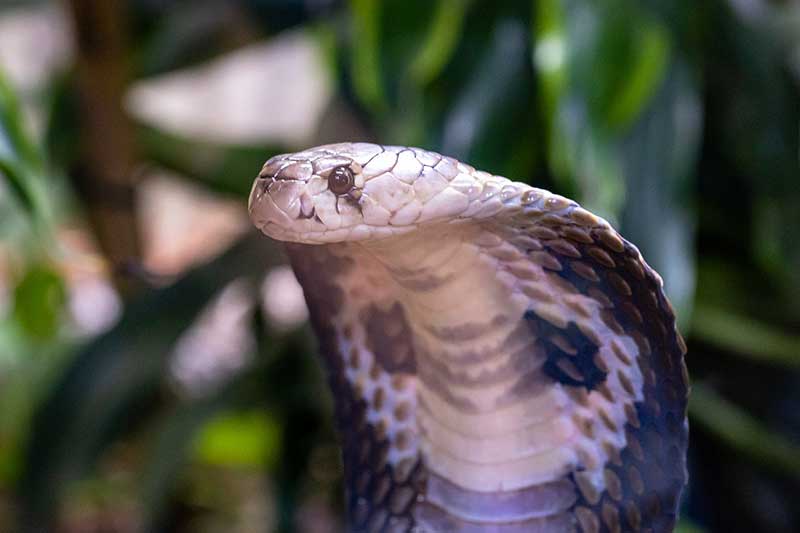 But, before diving into any more about venomous snakes, it’s important that we understand the difference between poisonous and venomous. Poisonous relates to the “victim” ingesting a poison, while venomous requires toxins to be injected into their victim through the use of fangs (or similarly stingers and barbs in other animals). So, in almost all cases, snakes are not poisonous but are venomous. However, there is a type of snake, Keelbacks (found in SE Asia) that are both poisonous and venomous due to what they eat.

How we measure snake venom toxicity
One way to measure the potential deadliness of a venomous snake is the LD50, which is the lethal dosage, or amount of venom, that is used to kill 50% of a sample population (rats or mice in laboratory experiments). A high LD50 means that the venom is less toxic and vice versa. The other measure is venom yield, or the amount of venom that a snake can inject. Some snakes may not have the most potent venom but can inject high volumes of venom and therefore can be very deadly!

Now that we’ve explained a couple of things about these potentially deadly serpents, let’s dive right into this list of the world’s largest venomous snakes!

10 of the world’s largest venomous snakes

The Gaboon Viper is the largest venomous snake in the world (by weight) and has been known to get up to 25 pounds. With some of the longest fangs of any snakes, getting as long as two inches, they are certainly not a snake you would want to be bitten by!

They tend to have a calm demeanor but are able to strike incredibly quick. They hunt for their prey with the use of thermal pits, which act as heat sensing organs and help to detect warm-blooded prey items. Gaboon Vipers can be found waiting to ambush unsuspecting prey items under fallen leaves and within thickets.

The King Cobra, or the king of snakes, is the longest venomous snake in the world. The longest ever recorded was just over 19 feet long. The latin name for King Cobra literally means “snake eater” as they are known to feed mainly on snakes but have also been known to eat monitor lizards.

The venom of King Cobras is not nearly as toxic as some of the other snakes found within their range. However, they are able to inject large amounts of venom at once, making a bite from a king cobra very deadly. During mating season, male king cobras will fight with other males to win the chance to mate with nearby females.

The Coastal Taipan is the longest venomous snake in Australia and has venom that is incredibly lethal, however their venom is slightly less toxic than their relative, the Inland Taipan.

Coastal Taipans are active hunters, meaning they will seek out their prey and hunt them down. When they encounter their prey, they will quickly deliver a lethal series of bite and release and allow for their prey to wander off while the venom begins to work.

The Black Mamba are one of the longest venomous snakes in Africa. In their range, Black Mambas are feared for being incredibly quick and deadly. They are some of the fastest snakes on land and can slither along at speeds of up to 12 miles per hour- not bad for having no legs! Despite their deadly venom and quick speeds, Black Mambas seldom hurt anybody. They are incredibly weary of humans and will flee immediately if approached.

Black Mambas are terrestrial and arboreal, meaning that they can be found on the ground and up in the trees. They eat small invertebrates (birds, rodents, bats, etc.) and will take down their prey by delivering a swift bite, letting go, and waiting for their venom to do its job before consuming it.

Bushmasters are the longest venomous snakes in the western hemisphere. Despite their large size, they are rarely encountered and can be difficult to find. Their reticulated pattern of shades of browns and black allows for them to remain hidden under leaf litter without ever being noticed by a passerby.

However, if you do get too close to one, Bushmasters are known to beat their spiked tail against the ground creating a sound similar to the rattlesnake. This has given them the nickname of the “mute rattlesnake”.

The Forest Cobra is another one of Africa’s longest venomous snakes. Like their relatives, Forest cobras have that iconic hood that they will rear up and display when threatened. Forest Cobras are the largest of the true cobras. All true cobras are within the genus Naja and there are just under 40 species that are considered to be true cobras and fall within the Naja genus.

Forest Cobras live in the forest (as you could probably guess by their name) and have been known to be amazing climbers. They can climb to heights of 30 feet or more with no trouble. They are also amazing swimmers and will feed on fish found in forest streams.

You may also like:  11 Animals That Live in Meadows

As the name suggests, Yellow Sea Snakes spend much of their time in the ocean where they can dive to depths of over 150 feet. They mainly feed on eels and can be found swimming in warm waters with sandy or muddy bottoms. Due to the depth and location of their habitats, there aren’t many good pictures of them available.

While they are not as large as Bushmasters, the Fer-de-lance is responsible for the most snakebites in their region of South America. These snakes can often be found living amongst human settlements, which likely contributes to their reputation for having run-ins with people. Luckily, scientists have developed an anti-venom treatment that is very effective and victims that are treated very often survive.

Its preferred diet of rodents draws the Eastern Brown Snake to areas where rodents are abundant- farmland and urban areas, which has likely contributed to a fair-number of run-ins between people and these snakes. While they prefer to flee from people, Eastern Brown Snakes have also been known to stand their ground and will raise itself off of the ground into an S shape to ward off predators.

Rattlesnakes are known for the impressive sounds they can make with their tail which is equipped with a rattle-like structure. When threatened, rattle snakes will vibrate this structure to produce a warning sound. This has also led to them being lovingly referred to as buzztails.

Where in the world is home to the most venomous snakes?

How many species of venomous snakes are there?

Out of over 3,000 species of snakes, there are around 600 species of snakes that are venomous. However, only 200 or so of these species are considered to be deadly to humans. Some snakes have venom that is great for taking down their prey (small animals like geckos and frogs) but is not strong enough to harm humans.

How do you know if a snake is venomous?

The only way to know whether or not a snake is venomous is to be familiar with the snakes in your area. Messing with a venomous snake that you thought was nonvenomous is definitely not a mistake you want to make!

No, that is a myth. However that doesn’t mean that you should get complacent around baby venomous snakes. Adult venomous snakes are larger and therefore will have larger venom yields than the babies. Additionally, adults are bound to be more experienced and more precise in their strike.