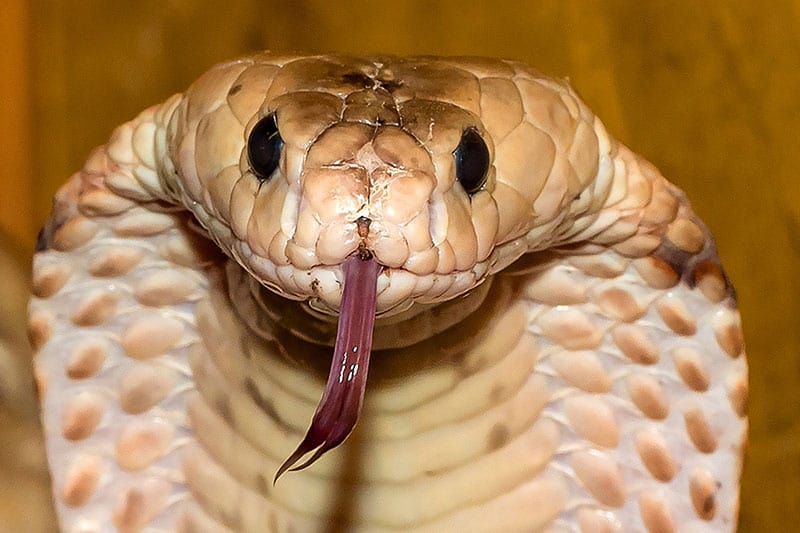 Snakes in their own right are a group of fascinating animals and are feared by many. However, venomous snakes have an added element of danger which tends to captivate people’s interests, whether they are afraid of them or not. But did you know that venom is not “one size fits all”, and that there are actually different types of snake venom?

Snakes have evolved to have venom to take down their prey and defend themselves if need be. Of the 3000 or so species of snakes in the world, 600 of them are known to be venomous. In this article we will go into detail about the types of venom as well as some of the snakes that have these types of venom.

How snake venom toxicity is measured

Scientists measure venom in two different ways: by venom yield and the LD50. Venom yield is easy to remember as it refers to the amount of venom that a snake can administer or inject in a single bite.

The 3 types of snake venom

There are three main types of snake venom that affect the body differently which are neurotoxic, hemotoxic, and cytotoxic venom. Each venom type targets a specific part or system of the body. All types have the potential to be deadly and/or cause severe damage.

In addition to specialized effects, all venom is thought to have proteolytic effects which essentially cause the initial damage to the immediate bite or injection site of the venom by breaking down the tissue at the bite site.

Some sources claim proteolytic venom as a fourth category of venom, however because all venom has proteolytic effects, it is not entirely correct to place it in its own category.

Neurotoxic venom can reduce the production of neurotransmitters or block neurotransmitters all together, severely disrupting processes in the nervous system. These disruptions can essentially paralyze the muscles that we use to breathe, which in turn can cause respiratory failure and prevent bite victims from breathing.

In some cases, neurotoxic venom can overstimulate neurotransmitters, which can lead to rapid muscle twitching or convulsions. Survivors of snake-bites (with neurotoxic venom) do not tend to have lasting symptoms other than scarring around the bite site.

Effects: Severe pain, swelling of area surrounding bite, necrosis (death of tissue)
Deadly? Yes, but less-so than the other types of venom

Cytotoxic venom affects the cells that make up tissues, organs and muscles in our body. Cytotoxic venom works quickly to kill and damage the body cells. Victims that are bitten by snakes with cytotoxic venom begin to experience the effects almost immediately.

You may also like:  8 Pet Reptiles For a 10 Gallon Tank (With Pictures)

Cytotoxic bites kill the tissues of the body, causing necrosis. Cytotoxins help to digest and break down prey before it is eaten, and in snake bite victims, the tissues around the bite site may be affected similarly and become liquified. Necrosis can also cause the skin to become blistered, incredibly swollen and/or blackened as tissue cells die.

With time, necrosis can spread from the bite site to other parts of the body. Those that are not treated right away may need to have the affected part of the body amputated to stop the spread of necrosis. Lasting effects of a bite from a cytotoxic venom often include permanent tissue damage.

Hemotoxic venom poisons the circulatory system or bloodstream. Once hemotoxic venom enters the blood stream, it begins to attack and kill red blood cells. The red blood cells burst open and essentially prevent the blood clotting (coagulation) that naturally occurs in the body. Severe internal bleeding occurs as a result of blood cells rupturing and then the inability for the blood to clot.

When the damaged red blood cells begin to accumulate or build up, it can prevent the kidneys from functioning properly. Additionally, hemotoxic venom can also cause blockages in blood vessels which can lead to heart failure.

Effects of hemotoxic venom typically take longer to affect the victim than neurotoxic or cytotoxic venom. Like all venomous snake bites, getting to treatment as quick is possible gives the victim the best chance of survival.

King Cobras are the longest venomous snake in the world and are distributed widely throughout Southern and Southeast Asia. They are widely feared for their large size and venom but in some places King Cobras are worshipped. King Cobras are often found in human dominated areas, but rarely bite people.

The Black Mamba is one of the largest venomous snakes in the world. Black Mambas have a bad reputation and are commonly feared, however they are rarely seen by people due to their tendency to flee far before they are approached. While their bites can be deadly, their flighty nature means that very few people are bitten by Black Mambas.

Most snakes with hemotoxic venom are vipers and are in the family Viperidae. These types of snakes are widely distributed and can be found in North and South America, Europe, Asia, and Africa. In fact, almost all species of venomous snakes found in the United States are vipers and therefore have hemotoxic venom. 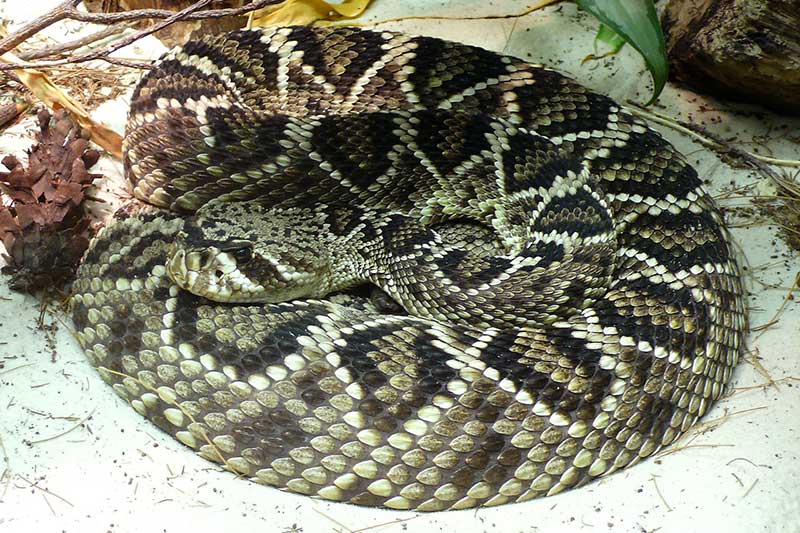 Eastern Diamondback Rattlesnakes are the largest venomous snake found in the United States. They occur in the Southeastern United States, where they are most common in forested areas. They have high venom yields however those that are bitten, as long as they seek treatment most often survive.

Snake venom is basically specialized and evolved saliva that contains toxins. These toxins fall into three main groups (as mentioned above) and accompany various proteins and enzymes that help to immobilize prey and even help to digest their prey. Venom can also be used as a last resort for defense.

Enzymes help to break down and degrade tissues of their prey or an unlucky victim. For example, certain enzymes (collagenase) directly affect collagen which is found in our skin as well as connective tissues in our body.

Toxins are essentially poison to the systems that they target (blood system, nervous system, tissues). When paired with enzymes that work to break down tissue, it can be a deadly combo.

What is snake venom?

Snake venom is essentially evolved spit or saliva. It essentially looks like a thick, pale yellow liquid or serum. Snake venom is administered or injected by fangs which are specialized teeth. The fangs have large grooves in them that the venom runs along and almost act as hypodermic needles to inject venom.

Where does snake venom come from?

Venomous snakes have venom glands where venom is made and stored. These venom glands are located below the eye area and there is one on each side. These glands are connected to the fangs which are used to inject the venom.

How do snakes inject venom?

The specialized fangs of venomous snakes act as hypodermic needles where venom from the venom glands essentially flow down the grooved ridges of the fangs. As long as a venomous snake breaks the skin, it is able to inject venom if it wants to. The motion used to bite down helps to put pressure on the venom glands and help to force the venom out of the glands, into the fangs, and then into the victim.

However, not all bites from a venomous snake contain venom. Venomous snakes are able to give “dry-bites” which contain little to no venom.

What does snake venom do to the body?

The effects also depends on how much venom the snake injects. In less severe cases, a venomous snake bite may cause localized swelling, pain and scarring later on at the site of the bite. However, serious bites can lead to paralysis, heart failure, organ failure, internal bleeding, necrosis or death.

Why is snake venom so deadly?

The combination of targeted toxins and enzymes that break down and destroy tissues and cells can be a deadly concoction. These combinations can cause organ failure, internal bleeding, and difficulty breathing which does not typically end well.

Thanks to science, humans have learned to make use of snake venom. Snake venom can be used for research purposes and also has many uses in the medical field and is even found in some cosmetics. Some uses for snake venom are:

You may also like:  25 Facts About Hawksbill Sea Turtles

The answer to this question really depends on the situation (type of snake, how big the snake is, how much venom it injected, the size of the victim, etc.) But the LD50 and venom yield of the Black Mamba make for a quick deadly combo. A bite from a Black Mamba is able to kill an adult in 20-30 minutes.

Can a snake run out of venom?

Yes and no. Venom glands are able to steadily and consistently generate venom, meaning that the snake will never truly run out. However, it does take time and energy for the gland to produce venom, so if a snake injects all of its’ generated venom in a single bite, it essentially “runs out” but only short-term.

How much venom can a snake produce?

This depends on the species and size of the snake. Obviously, much smaller snakes and species will have smaller venom glands and therefore produce less venom. Gaboon Vipers have very large venom glands and have the highest venom yield and can inject anywhere from 200-1000mg in a single bite.

Can you drink snake venom?

Yes, but proceed with caution because it’s probably not a good idea unless you know what you’re doing! I’m not sure venom would taste very good, and it seems like a risky venture to get the venom, but your body is capable of ingesting venom.

That being said, venom becomes toxic or harmful when it enters the blood stream. So, if you have cuts or sores in your mouth, there is a chance that drinking venom could turn dangerous.

Will a venomous snake die if it bites itself?

No, unless it dies from complications from the bite itself. Snakes are immune to their own venom. But if a snake bites itself and punctures and organ, then that could lead to life-threatening complications.

What animals are immune to snake venom?

There are certain animals that have evolved immunities to the venom of snakes (but only those species that are found in the same range or areas). Some of these animals include, Woodrats, Honey Badgers, Mongooses, Skunks and Ground Squirrels.

Are all venomous snakes aggressive?

No, quite the contrary! Snakes are afraid of people and want to get away from us. Snakes will only defend themselves.

Yes, but not all venomous snakes lay eggs. Some venomous snakes are viviparous and actually give live birth. For more information about snake reproduction check out this article: How do snakes give birth?

How many people die from snake bites?

The World Health Organization label Snakebite as a neglected but pressing health issue. Around 2.7 million people are envenomated each year, and anywhere between 81,000-138,000 people die each year from snake bites.

Venomous snakes certainly deserve a healthy respect as they are equipped with potent and sometimes life-threatening venom. That being said, not all venomous snakes are actually harmful to humans. Some snakes may only have venom to take down small prey items (like frogs, lizards, mice, etc.) but not enough to cause damage to humans.

Snake venom is without a doubt one of the coolest hunting tools in the animal kingdom. But did you know that venom isn’t just for snakes and that are even venomous mammals? The evolution of venom in the animal world is certainly a natural wonder and has led to amazing scientific discoveries and even the creation of life saving medicines.