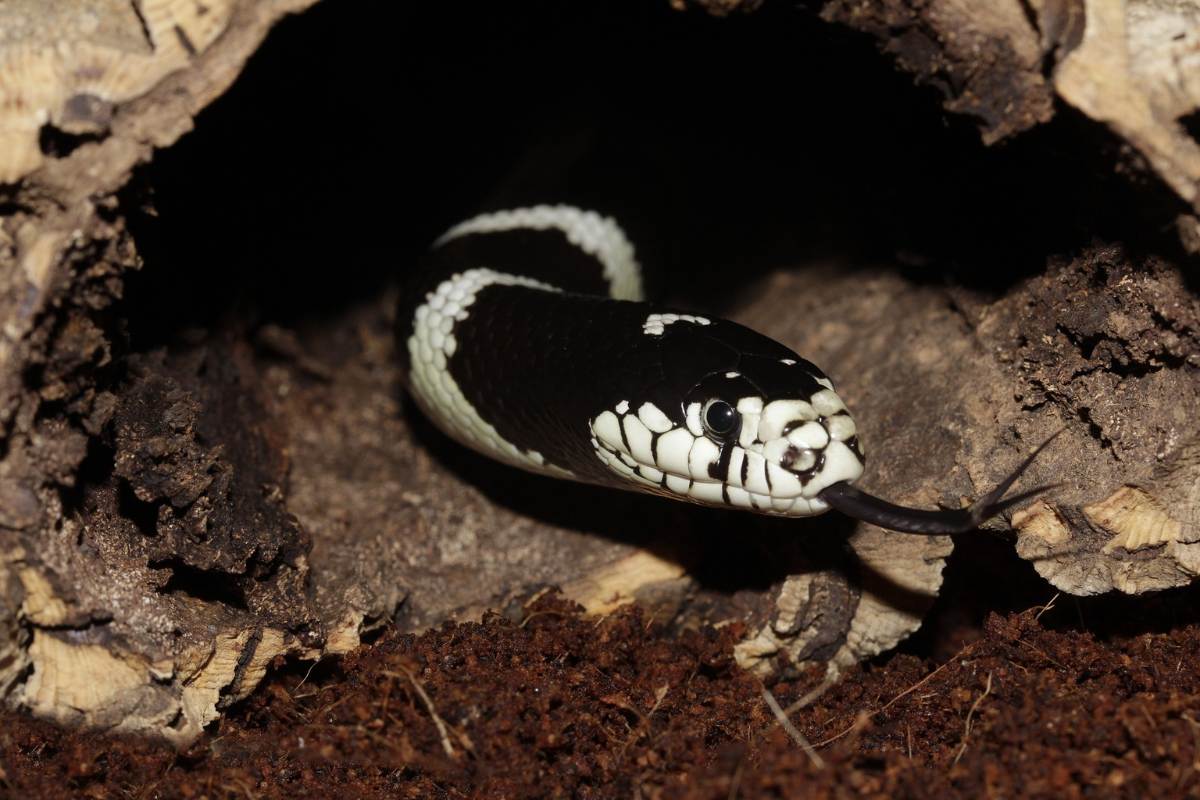 There are over 3,000 snake species worldwide. Most live in tropical areas with hot and humid weather all year. However, some snakes live in areas where the winter season is harsh.

For this reason, a lot of people might wonder, where do snakes go in the winter? Some species can survive in freezing conditions, and this article will explain how these incredible animals do so.

Where do snakes go in the winter?

Snakes are cold-blooded animals, which means they can’t control their body temperature internally. They rely on the temperature of the air and ground around them to regulate their internal temperature. Snakes seek warmth when temperatures drop and enter a state of semi-dormancy, where they don’t eat or move for short periods until these reptiles fully awaken in the spring.

Snakes getting ready for winter

As autumn approaches and the weather begins to cool, you may notice more snakes out and about. They become much more active in the fall because they’re looking for prey, such as mice, birds, and other animals that are easier to find when it’s colder outside.

When the sun can no longer help them regulate their temperature, these animals begin to seek a warmer place to hide, which usually involves burrowing underground or digging a hole under a tree or rock.

Snakes aren’t very good at regulating their own body heat, so they rely on their surroundings for extra help. When it gets cold enough outside, snakes begin to crave those warmer places more frequently.

What happens to snakes during winter?

Snakes have evolved to be able to live in cold weather conditions over time, so they have a unique way of adjusting to the winter months. When the fall season arrives, snakes begin to shed their skin in preparation for brumation.

They’ll stop eating and begin this process during this time. Brumation is similar to hibernation, but unlike hibernation, the snake doesn’t sleep for the entire winter season; rather, it sleeps for short periods of time.

The snake’s body temperature drops, and its heart rate slows significantly during this time. During this time period, it may also move less than usual and become more difficult to locate.

A hibernaculum is a place where snakes go to brumate or seek shelter from the harsh winter weather. Snakes spend the majority of their lives in the wild, so they must be able to find a brumation site that isn’t disturbed by humans or other animals. They also require a warm place to stay, so they don’t freeze during these times.

Snakes may hide in hollow logs, under rocks, caves, abandoned burrows (holes), or even under piles of leaves, depending on the species.

Coldest temperature for a snake

Snakes can be found in a variety of habitats, including deserts and tropical forests. But they all have one thing in common: they can’t stand cold weather.

These reptiles are ectothermic, meaning they prefer temperatures above 65° F (18° C). At lower temperatures, their bodies start to slow down and eventually stop working altogether.

That’s why snakes don’t thrive in colder climates and are more common in warm and tropical areas. They require extra activities to survive the cold, which is where brumation comes in.

Do snakes move around during winter?

Snakes don’t completely hibernate in the winter. They’re brumating, so snakes don’t sleep like other animals in hibernation; instead, they rest in a warm place and eat less food than usual.

Do snakes come back to the same area?

Snakes may have a favorite place to go when they need some peace and quiet, and they may return there year after year. Snakes will also return to their home range once they have emerged from brumation because this is where these creatures are familiar with finding food, water, and shelter.

They aren’t territorial, so even though they prefer to stay in their native range, other species and animals may still occupy these areas.

From April to October, snakes are at their most active. This is due to the fact that the weather is warmer and more comfortable for them, allowing them to move around more freely. In the spring, they feed to regain their energy from brumation and to mate with other snakes in order for their offspring to survive the winter.

In the fall, they’re seen feeding more to prepare for brumation.

Keeping snakes out of your house this winter:

When looking for a warmer place to brumate, snakes may come across your home. Snakes are cold-blooded animals, so they must maintain a high body temperature in order to function. This is why they want to spend the winter in your home—they’re just looking for a warm place to stay.

But don’t worry, there are some things you can do to avoid this.

In cold weather, snakes slow down and conserve energy to preserve their body heat. They don’t hibernate, but they do significantly slow down. This means that if you’re looking for them in the woods, you might not find them until spring.

Keep in mind that they can still move around and hunt if necessary, so it’s best to leave them alone when it’s cold outside.