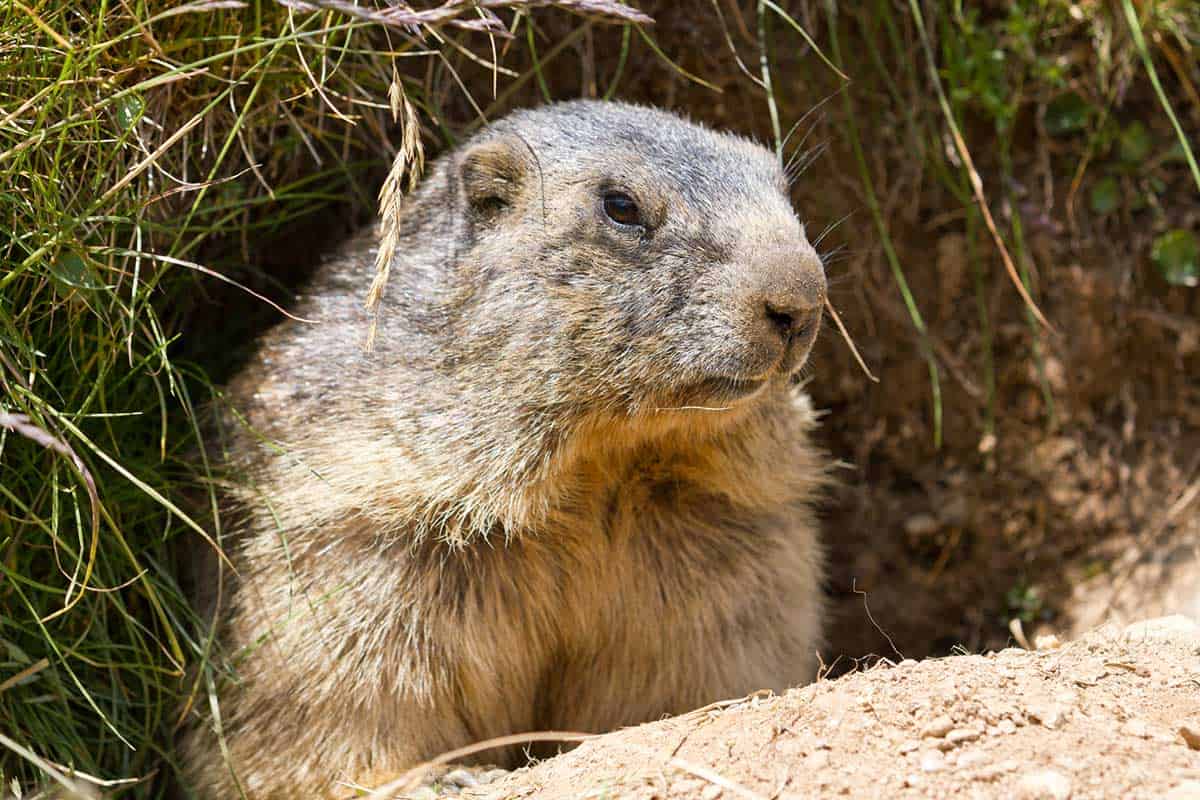 From moles to meerkats, there are a variety of animals that make their homes by burrowing in the ground. Some animals, like the prairie dog, live in complex communities underground while others, like the gopher, are loners. Burrowing animals often use their tunnels as a way to escape predators or the extreme heat or cold of their habitats.

Badgers are a type of animal that burrows in the ground. They are usually found in wooded areas, and their diet consists of small mammals and insects.

Worm snakes are small, thin snakes that get their name from their resemblance to earthworms. They are non-venomous and eat small insects and other invertebrates.

These snakes get their name from their strange, flattened heads which resemble a shovel or spade. Their smooth scales make it easy for them to “swim” through sand and bury themselves.

The fennec fox is the smallest member of the canid family that lives in deserts. They dig dens in the sand to escape the heat of the day and to raise their young.

Puffins are small, stocky birds with large beaks. They are excellent swimmers and can dive deeply to catch fish. Puffins burrow to build their nests and raise their young.

These turtles get their name from their ability to close up their shell like a box, which helps protect them from predators. They burrow to hibernate during winter.

Spadefoot toads burrow to survive cold winter temperatures. They have been known to bury themselves up to 8 feet below the surface.

Perhaps one of the most popular burrowing animals, the groundhog is famous for predicting the coming of Spring when he leaves his burrow after winter hibernation. Groundhogs spend their life in burrows.

Hognose snakes are nonvenomous and typically harmless to humans, although they may bite if provoked. They use their unusual turned-up snout to dig into the soil and burrow.

Wombats are marsupials that are found in Australia and Tasmania. They look like a giant guinea pig, and they burrow to sleep during the day because they’re nocturnal.

Tiger salamanders are one of the largest salamander species in North America. They’re a mole salamander so they love to dig and burrow.

The giant burrowing frog is a species of frog that is found in Australia. They dig burrows with powerful hind legs. They can remain in their burrow for months and even years during severe droughts.

The burrowing owl is a small owl that is found in North and South America. The owl gets its name from living in underground burrows on grasslands and deserts.

The yellow-spotted monitor lizard is a burrowing reptile that is native to Australia and New Guinea. They spend majority of their time in huge burrow systems underground with several individuals.

You may also like:  12 Common Animals That Eat Seeds (Granivores)

Gopher tortoises are found throughout the southeastern United States, and they are known for their large, round shells. They dig deep burrows in which they spend most of their time for protection from predators and the desert heat.

Armadillos have thick armored plates on their backs and sides that protect them from predators. They also have long claws that they use for digging. Armadillos dig burrows in which to live and raise their young.

Desert skinks are small lizards that live in the deserts of North America. They burrow into the sand to escape the heat and to hide from predators.

Alligators live in wetland habitats and can be found throughout the southeastern United States. They burrow in the wintertime in the banks of rivers, creeks, and swamps.

Sand Martins are small birds found in Europe and Asia, also called a bank swallow. They get their name from their habitat. They nest in burrows in sandbanks near water.

Moles are small, burrowing animals that live underground. They are found in a variety of habitats around the world and are known for their tunneling abilities.

Mud salamanders are found in North America. They prefer humid environments and can be found near ponds and other wet areas. When the weather is dry, they retreat to their underground burrows to avoid the heat.

There are a number of animals that burrow in the ground, but one of the most interesting is the meerkat. They are very social animals and live in groups of up to 30 individuals in a complex tunnel system.

Wood frogs are found in woods and forested areas across North America. They live the furthest north of any frog and burrow in the winter. They freeze almost solid in their burrows before they emerge in spring.

Gophers are common burrowing rodents people try to keep from tunneling in their yards. They are found in North America and parts of Europe.

Shearwaters are a type of seabird that spends most of its time flying over the ocean in search of food. When they’re not flying, they’re usually resting on the water’s surface or in burrows along the shore.

Mongoose are small carnivorous mammals native to southern Eurasia and Africa. They are found living in burrows or surface tunnels, and have been known to kill cobras and other deadly snakes.

Sand boa are adapted to burrowing in sand. They have eyes and nostrils positioned on the top of their head so they can bury their body, leaving their eyes and nose exposed.

Prairie dogs are small rodents that create extensive tunnel systems with their powerful front legs and sharp claws. These tunnels house their large families. Prairie dogs have been known to live in colonies or “prairie dog towns” of up to several hundred individuals.

Shrews are small fierce little predators that burrow in the ground. There are many different species of shrew, and they can be found all over the world.

The Mexican burrowing toad is a small, stocky toad that is found in the deserts of northern Mexico. It is a nocturnal creature that spends its days burrowed underground in tunnels.