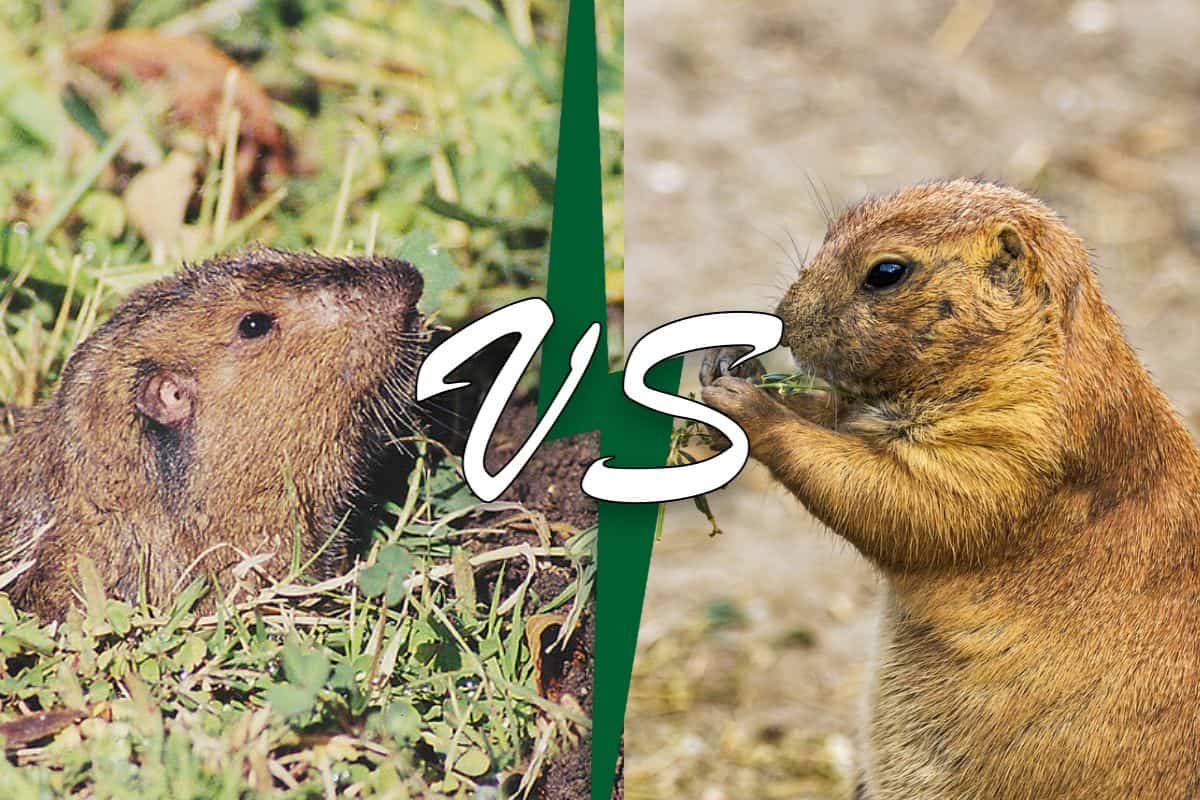 Gophers and prairie dogs look very similar, so it is no surprise that the two animals are commonly mistaken for one another. They are both rodents that burrow underground, but although they look similar, they have very distinct differences. This article will compare the gopher vs the prairie dog and highlight the differences between these two creatures.

1. Gophers and prairie dogs are members of different family classifications.

Gophers and prairie dogs belong to two different families. Gophers are members of the Geomyidae family, which includes at least thirty-five different species.

2. Gophers and prairie dogs are of different sizes.

Gophers may be smaller, but they have longer tails than prairie dogs. A gopher’s tail measures up to two inches long, while prairie dogs have much shorter tails. In addition to this size difference, a gopher’s tail has little to no hair, while a prairie dog’s tail is bushy.

Since gophers spend most of their time underground, they can survive in many places as long as there is plenty of vegetation to eat and plenty of soil to dig into. Gophers can be found throughout North and Central America. Prairie dogs live on vast grasslands and, as their name suggests, prairies. They can be found in some areas of North America.

A significant difference between gophers and prairie dogs is their social behavior. Prairie dogs are very social creatures, living in family groups called towns. In these towns, prairie dogs work together, share food, groom one another, and help protect each other from predators.

Conversely, gophers tend to be solitary creatures. They prefer to live alone but come together during the mating season.

6. Gophers and prairie dogs are not active at the same times.

Gophers have smooth fur that is typically dark brown, tan, or gray. Prairie dogs have much coarser fur that is a lighter brown. They often have white or black patches on their heads.

You may also like:  Why Do Squirrels Shake Their Tails? (Answered)

What is a Gopher?

Gophers are small, furry members of the Geomyidae family. They build large networks of tunnels in the ground and are primarily found in North America. They are commonly known as “pocket gophers” because of their prominent cheek pouches used to carry food.

Gophers can turn their pouches inside out like the pockets in a pair of pants. They do this to remove whatever they have stuffed inside. Gophers are solitary creatures, choosing to live alone except when it is time to breed.

What is a Prairie Dog?

Despite their name, prairie dogs are not dogs but are actually related to squirrels. They are members of the same family as squirrels: Sciuridae. Prairie dogs are small, brown rodents that live in groups in elaborate underground burrows.

Prairie dogs got their names from the fact that they tend to live on prairies, and they make a series of yipping and barking sounds that sound like a dog. They are highly social animals, choosing to live in groups called towns.

Prairie dogs have a very advanced communication system. Their series of yip and barks aren’t just chatter but a whole language with various meanings.

Gophers and prairie dogs are both rodents that burrow into the ground. They have many similarities but also have significant differences.

From size and habitat to social behavior and diet, these two furry creatures are two entirely different species. Next time you see a small, brown rodent coming out of a burrow, consider these facts and see if you can figure out if it’s a gopher or a prairie dog.