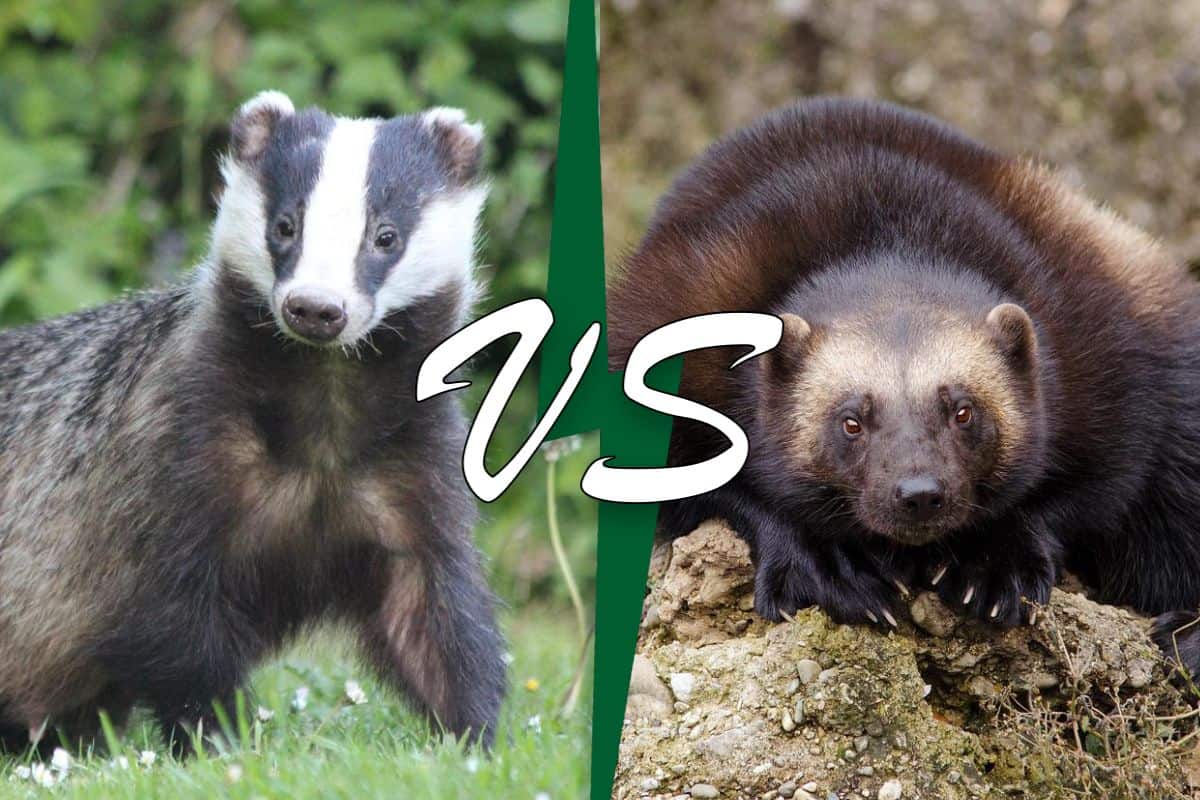 Badgers and Wolverines are two of the most iconic animals in North America. Badgers are known for their stripes, while wolverines are known for their ferociousness. While they may look similar, there are many differences between these two animals. The following article will discuss the 8 essential differences between these two animals, and compare the badger vs the wolverine!

But first, let’s see a quick overview of each of these animals.

What Is a Wolverine?

Wolverines are the largest members of the weasel family and are known for their strength and ferocity. Wolverines are found in North America, Europe, and Asia.

They have thick fur that helps them survive in cold climates. These tiny animals are also excellent hunters, well-known for their sharp claws, which they use to climb trees and catch prey.

Wolverines are solitary animals, often seen as fiercely independent. They are predators and will eat almost anything they can catch. They have been known to kill prey much larger than themselves, including moose and deer, thanks to their sharp claws that help them climb trees and catch prey.

What Is a Badger?

Badgers are also members of the weasel family, but they are much smaller than wolverines. Badgers are found in North America, Europe, Asia, and Africa. They have short legs and long bodies, and they are excellent diggers.

Badgers are known for their striped fur, which helps them camouflage themselves from predators. These nocturnal animals are also proficient hunters, and they will eat anything from insects to small mammals.

Badgers are social animals and live in family groups. They are very territorial and will fiercely defend their homes from intruders. Badgers have been known to fight off much larger predators, such as wolves and bears.

Wolverines also have much longer legs relative to their body size, giving them a more lean appearance. In contrast, badgers appear stockier and shorter-legged. These differences in size are due to the fact that wolverines live in open habitats where they need to be able to run long distances, while badgers occupy denser habitats where their smaller size allows them to maneuver more easily.

When it comes to physical appearance, badgers and wolverines are pretty different. Badgers are short-legged animals with a stocky build.

They have small eyes, large ears, and a long, narrow snout. Their fur is usually black-and-white or brown-and-white, with light markings on their faces.

Wolverines, on the other hand, are taller and more slender than badgers. They have small eyes and erect ears, and their snout is shorter and broader than a badger’s. Their fur is dark brown or black and often has a light stripe running down their back.

3. Speed and Type of Movement

Badgers and wolverines have significant differences in speed and type of movement. Badgers are pretty slow animals, only able to reach speeds of around 15 miles per hour when running. In contrast, wolverines are much faster, reaching speeds of up to 25 miles per hour.

Additionally, badgers tend to move in a series of short bursts, while wolverines are more likely to maintain a steadier pace. These differences are due to the different lifestyles of these two animals.

Badgers are primarily solitary creatures living in underground caves, while wolverines are social animals living in dens in the mountains. As a result, badgers don’t need to be able to move as fast or cover as much ground as wolverines do.

Although both badgers and wolverines are fierce carnivores, they have different defense mechanisms. Badgers use long, sharp claws to dig burrows and fight off predators.

On the other hand, wolves have strong jaws and sharp teeth that they use to hunt live prey. Hence, badgers cause more damage when they fight, while wolverines are more efficient hunters.

In addition, wolverines also have thick fur that provides insulation and protection from cold weather. When faced with a predator, a wolverine will often stand its ground and fight back, whereas a badger will usually flee to its burrow. As a result, each animal has unique adaptations that help it to survive in its natural environment.

Badgers are known for their digging behavior. They are capable of digging burrows that are up to 15 feet deep and 30 feet long.

Wolverines, on the other hand, are known for their tree-climbing behavior. They often climb trees in search of food or to escape predators.

Although both badgers and wolverines are skilled diggers, wolverines are not as adept at digging burrows as badgers are. This is due to the fact that wolverines have shorter legs and poorer vision than badgers do. Consequently, badgers are better able to dig deep and long burrows.

You may also like:  Do Killer Whales Eat Humans?

Badgers and wolverines have different dietary habits. Badgers are primarily scavengers, eating whatever carrion they can find.

Wolverines, on the other hand, are primarily hunters, preying on small animals such as rodents and birds. Wolverines will also eat berries and plants, but their diet is mostly meat. This difference in diet is reflected in the size of the two animals.

Badgers are much smaller than wolverines, weighing only about 10 pounds. Wolverines, by contrast, can weigh up to 40 pounds. The difference in diet is just one of the many ways that badgers and wolverines differ from each other.

While badgers can be found in a variety of habitats, including forests, grasslands, and deserts, wolverines are typically only found in cold, mountainous regions. As a result of these differences in habitat, badgers and wolverines are rarely seen in the same place at the same time.