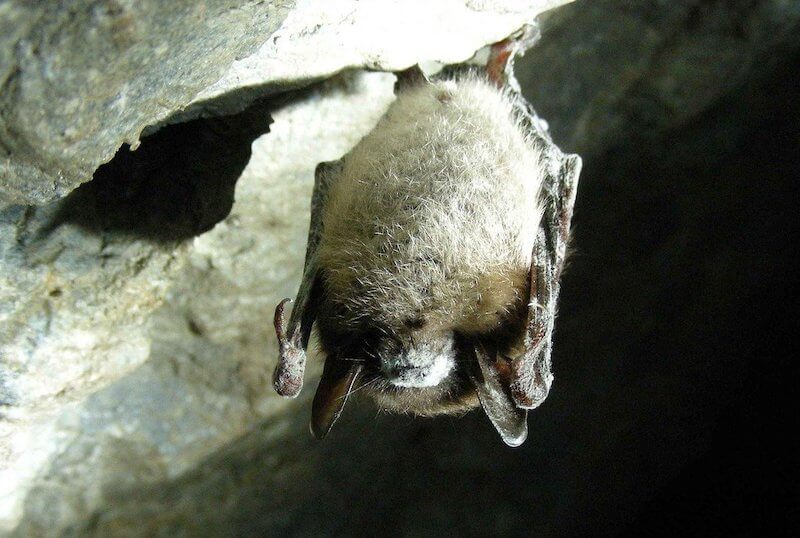 Many animals are well-adapted to life in dark caves, with some species unable to survive outside of caves at all. Small cave-dwelling creatures are known as troglobites and over 7,700 species have been discovered worldwide. However, scientists predict there are thousands of species we don’t know about since most caves are poorly explored. Who are these cave-dwelling critters? How have they adapted to the unique lifestyle there? Let’s find out with this list of 12 animals that live in caves.

12 Animals That Live in Caves

While some troglobites exist only in caves, not all of them are confined to the dark cave walls. Here’s a list of 12 animals that make caves their home.

The cave robber spider has unique claws, or hooks, on its legs that they use to snatch their prey out of the air. With outstretched legs, these spiders measure up to 3 inches long. They live deep in caves, and their webs are simple, with only a few strands they use to hang from cave roofs. This hook-legged species is mostly found in southwestern Oregon.

The southern cave crayfish is smoother, more transparent, and has longer antennae than its non-cave-dwelling relatives. With limited food supplies in caves, these crustaceans have also adapted to have slower metabolisms for more efficient use of energy. In fact, this species is known to live around 176 years because of this adaptation.

The cave salamander is a species of lungless salamanders between 4 to 6 inches long. Unlike many cave-dwelling species that are white or transparent, they are a bright red-orange with dark spots. They also have long limbs (for a salamander) that help them climb in and around the rock crevices in caves. You can typically find them in caves in Oklahoma, Virginia, Indiana, Georgia and Alabama.

Another common salamander species in caves is the Texas blind salamander. As their name suggests, they don’t have eyes and sense movement to identify and catch prey. They typically eat shrimp, snails, and other invertebrates. Texas blind salamanders can also surprisingly go up to 3 months without eating when food is scarce.

These salamanders have flat heads, no pigmentation in their skin, and gills so they can breathe underwater. You can only find them in the San Marcos area of the Edwards Aquifer where they are very sensitive to changing water currents.

The Youngsteadt’s cave millipede gets its name from their first collectors, Jean and Norman Youngsteadt, in 1976. You can find these transparent white millipedes in caves in Arkansas. They use their antennae and small hairs on their bodies to help them sense their surroundings in the dark.

The little brown bat is native to eastern North America. They live and hibernate in colonies in caves. You can also sometimes find them in underground quarries or mines. These bats have glossy, long fur that’s dark brown, olive, reddish, or golden with black or dark brown faces. They grow around 3.5 inches with 9 to 11-inch wingspans.

You may also like:  14 Species of Ducks in Florida (Pictures)

Bats use echolocation to navigate their surroundings and find prey. They emit a sound that bounces off objects, and the returning echo provides them information on the size and distance of objects around them.

Cave swiftlets are dark grey, dark brown, or black birds with a few white feathers. They build their nests in cliff-like locations, especially cave walls, and have adapted to see well in the dark. Similar to bats, they can also use echolocation to navigate.

These birds are native to Southeast Asia and build edible nests that are popular in China for bird nest soup recipes. You’ll find them roosting in colonies and they are quite territorial.

Another bird that nests in colonies in caves is the oilbird, which is related to the nightjar family of birds. They are native to South America and feed mainly on fruits from tropical laurels and oil palms. These slim, large birds grow between 16 to 19 inches, with 37-inch wingspans. They are nocturnal and are another species that can use echolocation, similar to bats, through a series of high-pitched clicks.

The Alabama cavefish is transparent and completely blind like most cave-dwelling animals. Instead of using sight, they’ve adapted to have extremely sensitive nerves that can help them identify water temperature changes and the distance of objects nearby. You can only find these fish in the underground pools of Key Cave in northwestern Alabama.

Yellow-red rat snakes are a non-venomous species that you can find living in caves, since one of their favorite meals is bats. They will dangle down from cave walls and pluck the bats out of the air with their mouths as the bats fly by. These species are native to Central America and Mexico and are orange or yellowish with dark marks on their bellies and large red blotches on their back.

The Great Basin cave pseudoscorpion looks like a combination of a tailless scorpion and spider. However, they are more closely related to camel spiders than scorpions. They also have no eyes or only a single pair of eyes, unlike the aboveground species they are related to.

These small arachnids often hide under leaf litter, rocks, and other debris where they can find mites and insects for food. Their claw-like front limbs have spiny teeth that help them hold onto prey.

The tumbling creek cave snail is an aquatic species that live under rocks in caves. These freshwater snails prefer living where there are large bat populations because they rely on bat guano (feces) as a source of nutrition. As their name suggests, you can find them in the Tumbling creek habitats in southern Missouri.