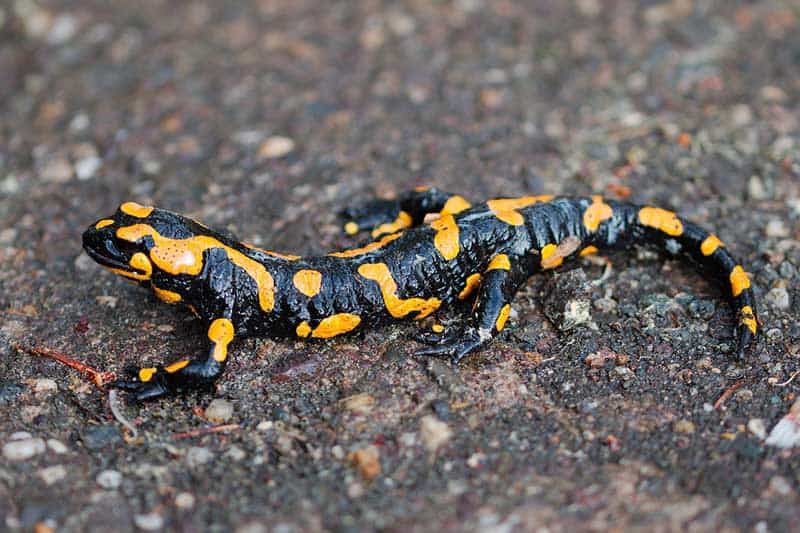 Both salamanders and lizards are common throughout North America, and at first glance, it can be difficult to tell the two apart. To many people, they may even appear to be one and the same species as they look and act very similar. This begs the question, are salamanders considered lizards?

This article will explore how to determine if the animal you’re seeing is a salamander or a lizard, as well as look more in-depth at the differences between the two.

Is a salamander a lizard?

At first glance salamanders certainly look like lizards, but salamanders are not lizards. Salamanders are actually a part of their own unique grouping of animals. They’re commonly mistaken for lizards as they both have four legs, a tail, and share a similar shape, but that’s about where the similarities end.

What’s the difference between a lizard and a salamander?

The main and largest difference between them is that lizards are reptiles and salamanders are amphibians. They have completely different life cycles and entirely different anatomy, with salamanders not even possessing external ears or keratinized claws, unlike lizards which have both.

It’s a phenomenon called convergent evolution, which simply means organisms that were once related end up independently evolving similar traits as a result of adapting to similar environments. In the same way both sharks and dolphins have a similar streamlined body shape, both lizards and salamanders evolved to have four legs and a tail. Reptiles are actually more closely related to birds and mammals than amphibians like salamanders.

10 key differences between salamanders and lizards

1. A salamander doesn’t have dry scales

This is the most noticeable difference between the two and the most easily identifiable. Salamanders are covered in a mucous layer reminiscent of their juvenile stage that keeps moisture in their skin. This also makes them especially susceptible to things like pollution, as there’s less of a protective layer against harmful compounds and are a good indicator for the health of an ecosystem.

2. Salamanders only have internal ear-openings

Unlike lizards that have obvious outer ear openings, salamanders lack both an outer and a middle ear. They can still hear, but it’s in a rather unique way. Sound waves cause their chest to vibrate, and then the vibrations are carried by air from the lungs to the animal’s inner ear where it’s finally processed as sound.

Lizards possess claws in order to climb, run, and attack other animals. However, the salamander prefers to stay hidden and safe and are much less confrontational than lizards as well.

To tell the difference between the tracks of a salamander and a lizard, you simply need to count the toes! If it’s a salamander, then it’ll have fewer toes on its “hands” than on its “feet”, while lizards will have five toes on both!

5. Salamanders depend on the water for reproduction

Salamanders belong to a group of animals called amphibians, which includes frogs as well. Amphibians begin their life cycle in the water and undergo a metamorphosis from their juvenile water-breathing forms to adult air-breathing forms. Lizards, on the other hand, have leathery and partially calcified eggs that are typically buried in sand or dirt.

6. Salamanders have shorter legs and scuttle

Lizards tend to be longer-limbed and they move in more of a creeping motion. Salamanders, on the other hand, move incredibly quickly. The most common kind of salamander you probably encounter is the newt, which does move very fast indeed, especially when startled.

A big difference between lizards and salamanders is how they reproduce. Both have internal fertilization, but the male salamander will simply deposit a spermatophore on the ground near a water source for a female to find and will not be an active part of reproducing, unlike male lizards who are.

Most species of lizard, once the eggs are laid, move on with their lives and leave their eggs simply hidden – out of sight, out of mind. On the flip side, the majority of salamander species will guard their eggs against predators until they hatch.

9. They develop into adults very differently

As mentioned before, salamanders are amphibians. This means that they had to change from their aquatic tadpole stage to lung-having adults. They lose their visible feathery gills and ability to breathe water but in most cases gain lungs, eyelids, a tongue, and the ability to walk on land.

All species of lizard breathe using solely lungs, but there are many species of salamander that can breathe via lungs, gills, and even a combination of skin and lungs! The Hellbender Salamander is an example of these. This is a characteristic shared by frogs and comes from their specialized skin that allows for the exchange of oxygen and carbon dioxide directly to and from the lungs.

On top of that, their internal physiology is completely different with salamanders only having an internal ear present, and their reproductive cycle happening almost independently of the opposite sex.

Salamanders are amazing animals and while they may look intimidating, are incredibly interesting on so many levels. Some have even been known to be poisonous and gorgeous bright colors that many lizards are lacking and they inspire a certain passion in people.

Because they’re most impacted by pollution, they’re also the first species to go when an ecosystem is thrown out of balance. The bright side of this is they are a remarkably accurate indicator of the health of an ecosystem, so if you get to see yourself a salamander, know they’re looking out for you and your health even if they don’t know it.