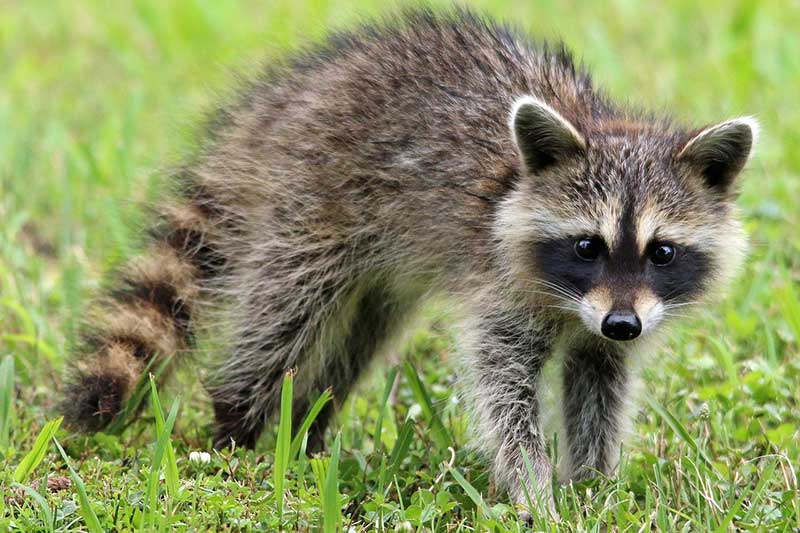 Trash Pandas, Treasure Cats, whatever you want to call them, there’s no denying that raccoons can be trouble. With people encroaching further into their habitat, they have adapted to living right next to us. Even when they’re getting into our trash, these fuzzy bandits are pretty cute. Their hijinks are often a family activity since baby raccoons stay with their mother and siblings for an extended period. Here are some interesting facts about baby raccoons to keep in mind, the next time you see a group of them out and about.

1. They stay with their mother for around a year.

Even after they are weaned, baby raccoons stay within their family unit of mother and siblings, for about a year. The mother will spend this time teaching her kits to hunt and forage. Young raccoons will frequently make their dens fairly close to their mothers. Some young females will even continue to share a den with mom.

If it seems like raccoon activity in your neighborhood increases in the late summer and early fall, you aren’t wrong. Raccoons give birth in late spring or early summer to an average of 4 kits. At around 12 weeks of age, the young raccoons will start to roam, and practice their foraging skills.

Like most carnivores, baby raccoons are born blind and completely dependent on their mothers. They are unable to stand until around 5 weeks of age and do not wean until 8-12 weeks old. At about 10 weeks they will start going out with their mother and learning the skills they need to survive.

5. Raccoons do not become nocturnal until they turn about a year old.

Raccoons are generally nocturnal animals, but it is not a red flag if you see them out and about during the day. They will change den locations and occasionally forage in daylight. Baby raccoon s in particulate are active during daylight hours. They may be out playing near their den while their mother catches up on her sleep. As they grow older, they will make a shift to being more active at night.

7. Raccoons are not born with a mask.

Raccoons are born much lighter then they will be once they reach adulthood. They will not develop their markings, in particular their distinctive masks, until they reach around 10 weeks old. The darker color will slowly appear as they mature.

Raccoons have a reputation for scavenging and eating trash. Away from an urban setting, they are opportunistic omnivores who are also capable hunters. By 5 months of age, a juvenile raccoon is capable of catching small prey such as rodents and birds.

You may also like:  10 Types of Animals with the Best Eyesight (Pictures)

Baby raccoons are cute and relatively helpless. Many well-meaning people have inadvertently separated a young raccoon from its family thinking they have found an orphan. Mother raccoons will change dens, moving her babies from their birth den to a new location. Occasionally juveniles may be separated from their families by a barking dog, or just by wandering too far from the group. Before assuming a young raccoon needs to be rescued, note a few things. Does it appear dehydrated and in distress? Is it ungroomed and covered with fleas? Is it following people? If the answer to this is yes, then you may have an orphan.

Baby raccoons are not afraid to use their voices. They will growl, hiss, and have an alarm snort.

11. They will grow whiskers on their toes.

Raccoons are known for their ability to get pat “raccoon-proof” contraptions and their dextrous fingers. Part of this dexterity comes from the whiskers they grow on their toes. By the time baby raccoons are able to hunt and forage while supervised, they will have grown whiskers on their front feet, that make their nimble paws even more sensitive.

By the time they are ready to leave the den and live on their own, female raccoons are sexually mature and capable of reproduction. Male raccoons will not reach sexual maturity until they reach two years of age.

13. Orphaned babies can be returned to the wild.

The goal of wildlife rehabilitation is to be able to release animals back into the wild. With orphaned raccoons, the goal is to release them by the time they are 16-24 weeks of age. If they are released by this age they will be able to readapt and learn the survival skills they will need to survive.