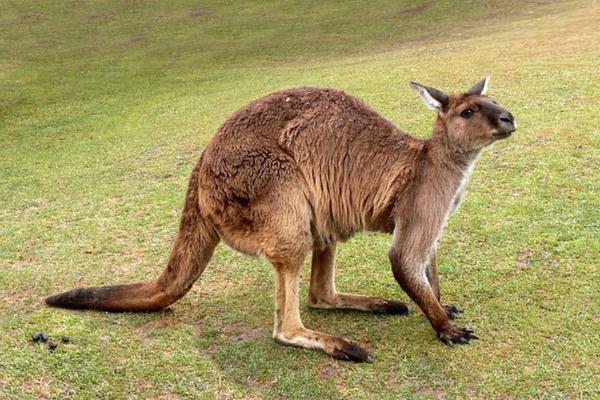 The animal kingdom is a wonderful and sometimes unusual place that contains over 2 million identified species just on planet earth alone! While most of these animals lay eggs or give birth to babies that stay outside of the mother’s body, a select few have pouches. Keep on reading to learn more about animals with pouches and how they play an important role for the creature.

While most of the animals you find with pouches are in the marsupial family, there are a few others that are not related but still have a pouch. These animals can be found both on land, as well as in the sea. Below you find a list of 10 animals with pouches, some of which are not marsupials.

Kangaroos may be the most well-known of the animals with pouches. These marsupials use their pouches to house their young for several months, keeping them safe and protected.

The young kangaroos, which are called joeys, are only about the size of a grape when they are born, and will grow into an adult kangaroo that can weigh as much as 200-pounds.

Despite their agility, kangaroos cannot hop or walk backward. This is because of their large tails and long feet. What they can do, however, is hope up to 25 feet in one single bound, and the female kangaroo can also pause their pregnancy so that they give birth only during the right conditions.

The Virginia opossum is the only marsupial, or pouched mammal, found in North America. The baby opossums are protected in the pouch while they develop and nurse. Like baby kangaroos, young American opossums are known as joeys, while the adult males and females are called jacks and jills.

The Virginia opossum may look scary, but they actually help control the tick population and can consume as many as 5,000 ticks every season. They are also immune to the venom of various animals, such as rattlesnakes, scorpions, and honeybees.

Another marsupial on our list is the koala. For about 6-months, the baby koala will stay in its mother’s pouch until it is developed enough to ride on its mother’s back.

After this time, they will use the pouch for sleeping and feeding only. This pouch opens backward towards the koala’s hind legs, and not forward like other pouched animals.

Koalas survive on the leaves of the eucalyptus tree and can consume over 2 pounds of leaves a day. Because the eucalyptus tree is poisonous to most other animals, the koala has a special digesting organ that detoxifies the harmful chemicals found in the foliage.

Like other marsupials, the Tasmanian devil uses its pouch to protect and feed its babies, which stay in the pouch for about 100 days after their birth.

However, they still return to the pouch to feed and sleep, but once they are fully weaned, which is around 6 months, they leave their mother’s pouch for good.

Tasmanian devils come by their name naturally. Not only do they have a disturbing and ear-piercing scream, but these creatures sleep inside the body of their prey and can crush bones with their powerful bite.

The baby wombat climbs into the backward-facing pouch of its mother after birth. They will continue to develop while in the pouch until they are old enough to leave.

An interesting fact about these marsupials is that they use their big butts as a form of defense. Not only can their behinds be used to crush the skulls of their predators, but they can also block off their burrows with their butt, which is resistant to bites and scratches because it mostly consists of tough cartilage.

Like the kangaroo, wallabies don’t immediately kick their babies out of their pouches once they are grown. In fact, it is not uncommon to find two joeys inside a wallaby’s pouch, one just a little baby and the other fully developed.

Wallabies are mostly nocturnal marsupials and spend the day resting. They feed on tree leaves, grass, and roots. A group of wallabies is called a “mob.”

Another marsupial on our list is the sugar glider. This small possum uses their patagium (a membrane that goes from its ankle to its wrist) to glide up to 150 feet in length. Sugar gliders keep their babies in their pouches for up to 10 weeks.

In the wild, sugar gliders live in colonies with up to 40 other sugar gliders. This colony typically includes 2 alpha males who bare most of the offspring. Young sugar gliders will generally leave when they are about 10 months old to begin their own colonies.

Male seahorses are not in the marsupial family, but they do have a pouch. Called a brood pouch, the male seahorse will incubate its embryos in this structure. When they are ready to be born, the baby seahorses will be expelled from the brood pouch.

Female seahorses do not have this pouch, nor do they give birth to babies. Despite not gestating or birthing their young, the female seahorse is still an intricate part of the process. The female seahorse actually produces the eggs, which are then transferred to the male who self-fertilizes the eggs in its brood pouch.

Sea otters are not marsupials, but are often mislabeled as one. This is because the sea otter has loose skin under their arms that acts as pouches or pockets. While they don’t use the pouches for their young, they do keep their food and some favorite rocks in them.

The sea otter has the densest fur of any mammal and can live up to 20 years in the wild. While they are often thought of as small, male sea otters can weigh up to 70-pounds, while the females can reach up to 50-pounds.

You may also like:  13 Animals With Masked Eyes (Pictures)

Chipmunks are not marsupials, nor do they raise their young in pouches. They do, however, store food in their cheek pouches, which can expand up to the size of their entire body. Chipmunks use their cheeks much like we use grocery bags, stuffing them full of food they have found to take back to their home. There they will store the extra food to prepare for winter.

Not only can they stuff their cheeks full, but a small chipmunk can gather 165 acorns in a single day. Another interesting fact about these adorable little creatures is that a group of them is called a scurry.