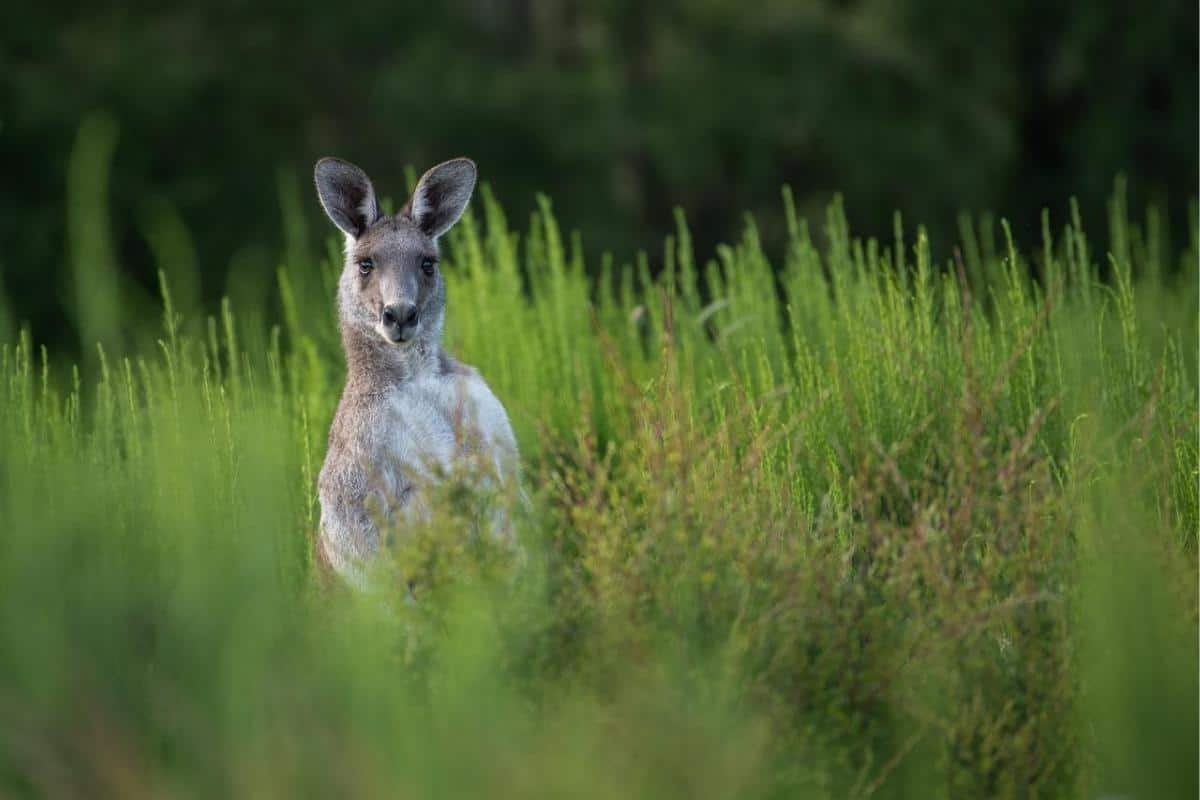 There is no doubt that kangaroos are among the most recognizable animals on the planet. Kangaroos are marsupials that are found throughout Australia and New Guinea. These animals must stay in good shape to be so agile and jump so far… have you ever wondered how strong kangaroos are?

In Australia, there are four species of kangaroos, including the antilopine kangaroo, the red kangaroo, the western gray kangaroo, and the eastern grey kangaroo. On the other hand, you can find the Goodfellow’s and Dorastree kangaroos in the rainforests of New Guinea.

While most kangaroos are relatively small, the largest of the bunch, the red kangaroo, can weigh up to 200 pounds and stand over six feet tall. But how strong are kangaroos, and what makes them so powerful?

How Strong Are Kangaroos?

Kangaroos are actually quite strong. They have massive hind legs that allow them to leap great distances, but they also have thick tails that they can hold their body weight along with powerful upper-body strength any many cases. Just because kangaroos are strong doesn’t mean they’re dangerous, but they can defend themselves if needed.

How Strong Are Kangaroo’s Legs?

Given the impressive way the kangaroos hop around, it’s no surprise that their legs are incredibly powerful. In fact, they have some of the strongest hind legs in the animal kingdom. Their legs are so strong that they can hop up to 25 feet in the air on one leap. And they can reach speeds of up to 35 miles per hour when running.

But how do they achieve such strength? Well, it all starts with their tendons. Kangaroos have powerful and flexible tendons in their legs, which allow them to store a lot of energy. When they release that energy, it gives them a powerful boost that helps them cover vast distances in a single bound. Their muscles are also incredibly well-developed, which allows them to generate immense force.

How Strong Is the Kangaroo Grip?

When it comes to grip strength, kangaroos are no slouches. In fact, they’re among the strongest animals in the world when it comes to sheer gripping power. A kangaroo’s grip is so firm that it can easily crush bones and break branches.

Kangaroos have incredibly powerful muscles in their arms and legs. Their shoulders are also very muscular, giving them added strength when gripping something. And, of course, let’s not forget about those massive claws. All these factors come together to create a grip that is simply astonishing. So, don’t be fooled by their gentle nature – those claws and muscles are packing some serious power.

You may also like:  16 Awesome Facts About Marine Iguanas (With Pictures)

How Strong Are Kangaroos Kicks?

Kangaroos are well-known for their strong hind legs, their weapon of choice during a fight. While these marsupials often use their hind legs for locomotion, they can also fight if they feel threatened.

A kangaroo’s hind legs are incredibly muscular and can generate a lot of force in a kick. In fact, it’s so powerful that it can kill a human with one blow.

The force of a kangaroo’s kick has been measured at over 200 pounds per square inch, making it one of the strongest blows in the animal kingdom. According to scientists, a red kangaroo is said to hit its target at a speed of up to 40 mph and over 759 pounds of force.

Compared to a trained martial arts master, a kangaroo’s punch is as powerful but slower. It’s essential to note that this force is enough to shatter a human’s bones. 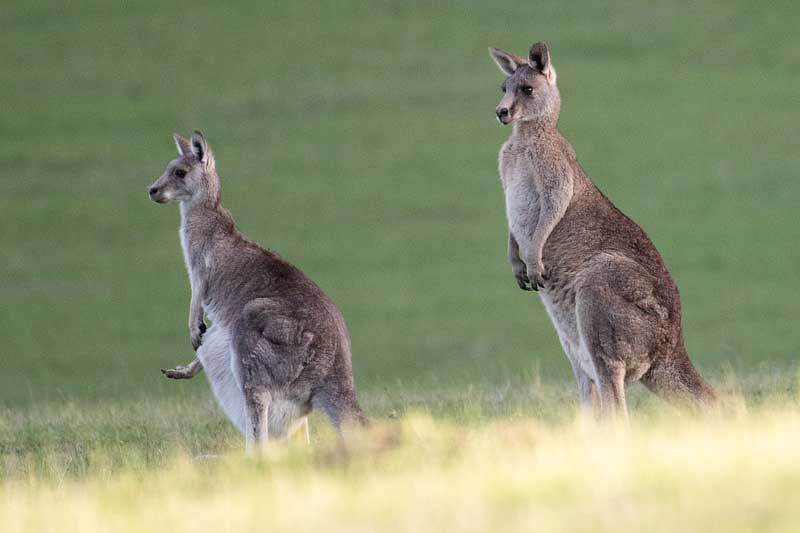 Kangaroos don’t have very powerful forelimbs, unlike their hind limbs. They typically use their forelimbs as hands to rip leaves and twigs off shrubs and trees. Nonetheless, their body size and speed help them gain enough velocity for a mighty swipe.

A male kangaroo can develop an average swipe force of 8,800 lb.-ft./s. This force is similar to that of the average mountain lion and up to nine times stronger than the average male human. However, this number can vary depending on the kangaroo’s individual speed and body weight at the moment of impact.

Kangaroos are 6-8 times stronger than humans. They have a strong bite that reaches 900 PSI, which is slightly weaker than the bite force of a great white shark and other apex predators. Compared to humans, with a bite force of only 162 PSI,  kangaroos are clearly much stronger.

A kangaroo’s kick and swipe forces are also quite strong compared to an average untrained human. An average male kangaroo can throw a punch with a force of 275 pounds, which is relatively low compared to a human.

That’s because heavy, strong, untrained men often have a swipe force of fewer than 45 pounds. Hence, the Kangaroo has a swipe force six times stronger than a human being.

How Strong Is the Kangaroo Tail?

Kangaroos have extremely strong tails that they use to fight off their predators. The kangaroo’s tail is so strong that it can support the weight of its entire body. And with the average kangaroo weight said to be over 200 pounds, that’s quite a feat.

The kangaroo’s tail is also used as a counterbalance when they’re hopping around on two legs. This allows them to change directions quickly and easily, which can be helpful when they’re trying to escape from a predator.

Studies show that kangaroos use their tails as an additional limb for balance and counterforce during quadrupedal locomotion to create positive mechanical force. This means they use their tails to lift their body when running and accelerate their speed. For this reason, kangaroo tails have more muscle mass than their forelimbs.

Male Vs. Female Kangaroo: Which Is the Strongest?

Male kangaroos are typically larger and stronger than female kangaroos. They have broader shoulders and chests, and their arms are thicker and more muscular. Their legs are also longer and stronger, allowing them to jump higher and further. Additionally, male kangaroos have larger tails, which they use for balance when hopping.

The kangaroo’s body is designed to hop up and down rather than run and walk. However, this does not mean that they are slow animals. In fact, kangaroos can reach speeds of up to 44 mph when hopping. This speed is much faster than the average human’s running speed, which is only about 15 mph.

The speed is also faster than that of a polar and grizzly bear and slightly slower than that of a lion or a tiger. One of the reasons kangaroos can move so fast is because they use their tails for balance. This helps them to change directions quickly and efficiently when they are running.

The kangaroo’s hind limbs also have strong muscles and flexible tendons that function like springs. These tendons bounce while straining and contracting to generate the energy required for the mammal to hop.