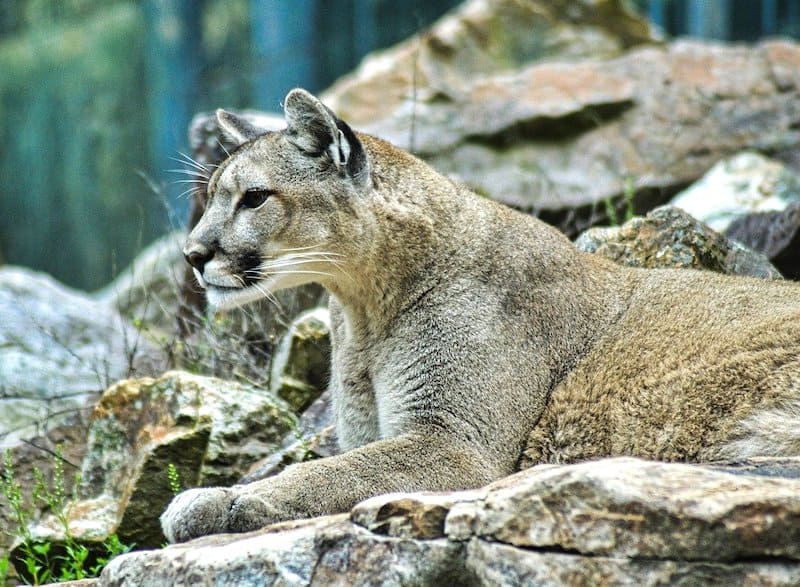 Mountain Lions are solitary and elusive creatures, they prefer to remain hidden and unseen. Because these wild cats of North America can sometimes live near our own backyards, we obviously have some questions. So in this article we’ll answer some of those common cougar questions, and learn some cool facts about Mountain Lions.

1. Are cougars and mountain lions the same?

And there are more names beyond that! Because of their historic wide distribution, each region came up with their own names for these big cats, no wonder they are known as “the cat of many names”.

Mountain lion attacks on humans are considered rare. They are very solitary creatures who prefer to pass by unseen. Even when living alongside humans, they rarely make their presence known. It is thought this is in part because they are not habituated to humans, and do not see them as prey.

This may begin to change as humans continue to move into their habitat, and it will be inevitable the number of encounters will increase. But cougars do not usually attack unless they feel cornered, or if someone running away from them triggers a chase response.

As housing and development expands further into their prime territories, these encounters will inevitably increase. Attacks and fatalities are still very rare, so take some comfort in that!

3. When are mountain lions most active?

Mountain lions are considered to be both crepuscular and nocturnal. Crepuscular means they like the early dawn and late twilight hours, and nocturnal means they are also active at night. They can certainly be seen during the day, but dawn, dusk and night is when they are most active.

4. Where do mountain lions sleep?

You might be thinking cougar retreat to a “home base” cave or a den for sleeping, but this is not the case. Most of the time they are always on the move around their territory, and cougars will just find a suitably sheltered spot to sleep.

Unless they have a large carcass they are feeding on over multiple days or the female is having kittens, mountain lions don’t tend to stay in one spot for more than a few days.

5. How long do mountain lions live?

The average life span in the wild is ten years. However in captivity, with no threat of hunting, starvation or many other typical dangers, mountain lions can live 20 plus years.

6. What sounds do mountain lions make?

Unlike other “big cats”, mountain lions do not have the ability to roar. They do not possess the same larynx and hyoid apparatus of the other big cat species that gives them this ability.

However mountain lions can make other sounds you may associate with cats such as hissing, growling, chirps and purrs. Mountain lions are also known for their eery “screaming” which occurs during mating.

Umbrella species is a term sometimes used in the world of environmental conservation. It refers to a species who’s protection inadvertently benefits many other species. Mountain lions are often considered umbrella species because of the large amounts of open habitat and wilderness they require to thrive.

For example they need almost 13 times the amount of area a black bear needs, or 40 times what a bobcat needs. So by protection cougars and creating legislation to preserve habit for them, it also has the potential to benefit many other animals species.

Mountain lions actually have the largest hind legs (proportionally) of all the members of the cat family. This makes cougars great jumpers, able to leap from the ground 18 feet up into a tree. Their large hind legs also make them excellent at sprinting for short distances.

Adult cougar paw-prints are about 4-5 inches across for males, and <3.5 inches for females. Their heel pad is in a bit of an “M” shape at the bottom with a divot on top. Both front and back paws have four “tear drop” shaped toes, with one leading toe that is slightly higher than the others.

Typically their tracks do not show any claw marks, unlike tracks of dogs or coyotes. They usually keep their claws retracted unless they are maneuvering on difficult terrain.

10. How far do mountain lions roam?

Females have less of a problem with their ranges overlapping with other females, while males do not want another male in their range. Often young female cougars will choose a territory next to the one in which they were born, where young males may travel very far to establish their own area.

Males have been occasionally spotted in many states of the east, who traveled there from the west. The famous “Connecticut mountain lion” traveled 1500 miles from South Dakota, the furthest trek currently recorded.

While this isn’t the norm, it is becoming slightly more common as mountain lions are striking out further east in search of territory.

You may also be interested in:
Mountain Lion population by U.S. state