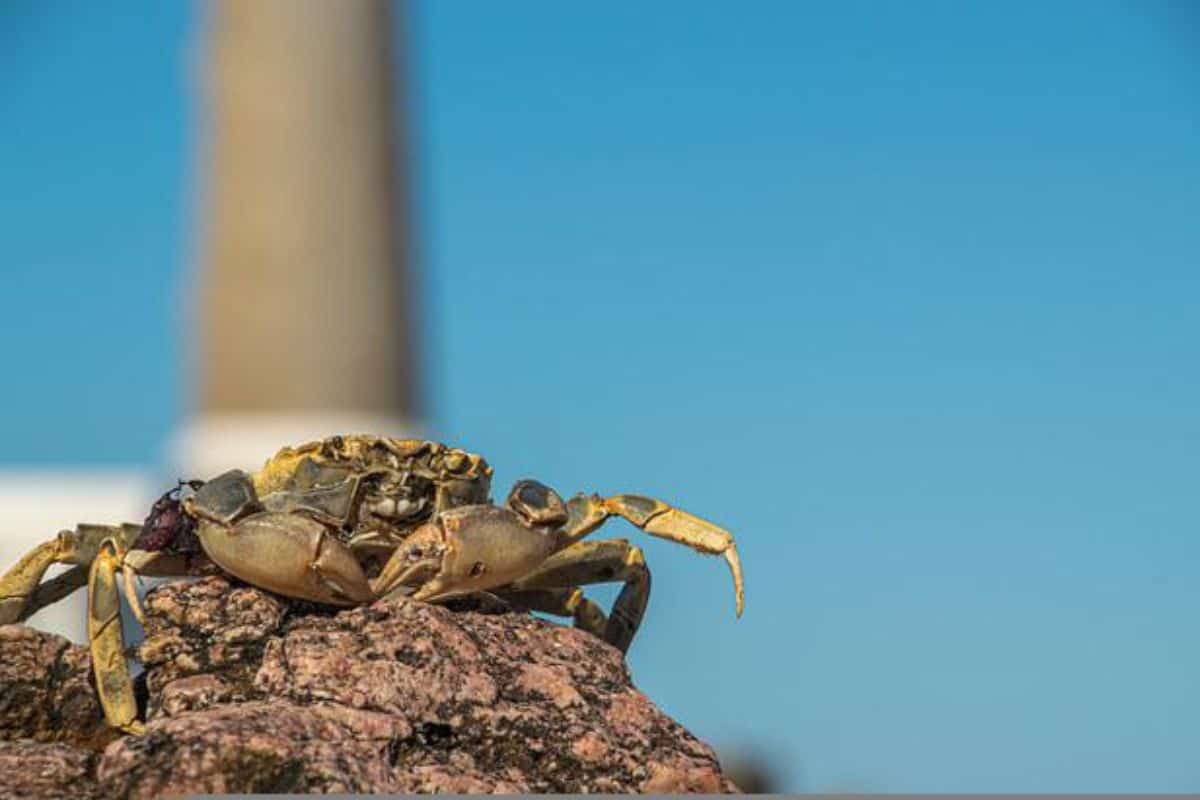 Crabs are crustaceans known for their pinchers and ability to live in oceans, freshwater, or on land. Although most of them have claws and multiple legs, but each species is unique. In this article we’re learning about some of the crabs in Florida.

There are thousands of crab species worldwide and humans eat around 1.5 million tons of crabs each year. At least three main species popular in cuisines can be found in the coastal waters of Florida and on local restaurant menus.

Find out what these species are and more in the following list of 12 types of crabs in Florida.

Blue crabs are the most popular species of crab to eat in Florida and live in almost all of Florida’s coastal waters. They have olive to grayish-blue bodies and bright blue legs and claws. The claws of adult females are usually tipped with red.

Although common in Florida, crabbing for blue crabs within three miles of the shore comes with limitations and shut-off dates. You also need a saltwater license to go crabbing over three miles offshore during the official hunting period. These crabs are available year-round but most abundant from May to August.

Stone crabs are most popular for their one enormous claw that contains most of their meat. They are brownish-red with a tan belly and grayish spots. These crabs typically live below the low tide line from the Gulf Coast of Florida to the Atlantic coast of North Carolina.

People commonly harvest stone crabs by removing one large claw and releasing the crab into the wild. The claws typically grow back within 18 months.

Stone crab harvesting is more regulated in Florida and occurs from October to May. They also shouldn’t be harvested if the claw size is less than 2.9. inches.

Fiddler crabs are semi-terrestrial, meaning you can find them in saltwater and on land on beaches. They live in burrows in estuarine and coastal mudflats as well as low marshes, sandbars, mangrove forests, tidal creeks, and stone beaches. Like most fiddler crabs, they have distinctive large claws and feed on marsh plants, bacteria, and algae.

The most common species in Florida is the smaller, Atlantic sand fiddler (Uca pugilator). However, in the state, you can also find the:

Sand crabs also called sand fleas or mole crabs, are tiny silvery or white crabs smaller than a human thumb. They have no claws and instead use antennae to help them catch plankton or micro-organisms on beach sand for food.

Another unusual feature is sand crabs can only move backward but can still burrow quickly into the sand. The two sand crab species that are most abundant in Florida are the:

You can find golden crabs in the deep waters of the Straits of Florida, the eastern Gulf of Mexico, and the southern Atlantic coast. They are large, non-swimming crabs that are buff or gold-colored and can have a carapace up to 7.9 inches.

They are another species that people eat. However, crabbing for golden crabs is more complex and only some fishermen have licenses to harvest them. You have to use miles-long lines of traps and wrestle with the fast-moving deep ocean waters to haul the traps up.

Hermit crabs are known for seeking shelter in empty shells instead of creating their own shells like other crabs. The hermit crabs in Florida can get rather large due to the mild winters and warm waters.

Although hermit crabs can hang out in the water or walk through small pools, they aren’t strong swimmers and spend most of their time on land.

There are at least 9 species of hermit crabs in Florida on beaches and in rivers, including:

The Harris mud crab is one of the most abundant mud crab species in Florida. They are native estuarine species found along the Atlantic Coast and Gulf coast from the Panhandle to Tampa Bay. They prefer rocky areas or habitats with wood debris and can be found clustered in oyster shells.

These small, brownish-green crabs grow around an inch across their carapace. They are also known to be an effective bait for anglers trying to catch sheepshead and mangrove snappers.

Spider crabs get their name from their large, spider-like appearance. They live in various coastal Florida habitats, from coarse sand and broken shell to coral bottoms.

Ghost crabs are one of Florida’s most common beach crustaceans. They are around three inches long, live in sand burrows, and can be seen scuttling to the ocean.

These nearly transparent crabs are nocturnal and move very fast across the sand, looking like a ghostly blur under the moonlight.

They are most abundant between May and September and can be fun to catch with kids. Although they are edible, they aren’t commonly eaten because of their small size.

Ghost crabs are associated with healthy beaches since they require a diverse and rich food supply to survive. They eat mole crabs, beach fleas, clams, lizards, and flying insects.

As their name suggests, the Bocourt swimming crab is a strong swimmer. They rely on drag-powered swimming, where they push water back in a cyclic motion to propel their body forward.

Although their native range is from Brazile to Jamaica, these crabs have been introduced to the U.S. and are an invasive species in the everglades. They prefer brackish water but can survive in nearly freshwater and marine habitats.

Mangrove tree crabs are small with square bodies that can be found in the mangroves of Florida, where they mostly feed on mangrove leaves. They average around 0.8 inches long, have large eyes, and are olive and mottled brown in color.

Their legs have tufts of black hairs near the tips to help them climb trees and other mangrove foliage. While they live mostly in the canopy, females will release their larvae into the water.

The purple marsh crab, also simply called marsh crab, is a small, olive green, or light brown to purple crab. You can mostly find them in the southern marshes of Florida and Volusia County.

They also live in shallow waters of bays where they construct underground tunnels and feed on marsh grass above ground and in the tunnels.