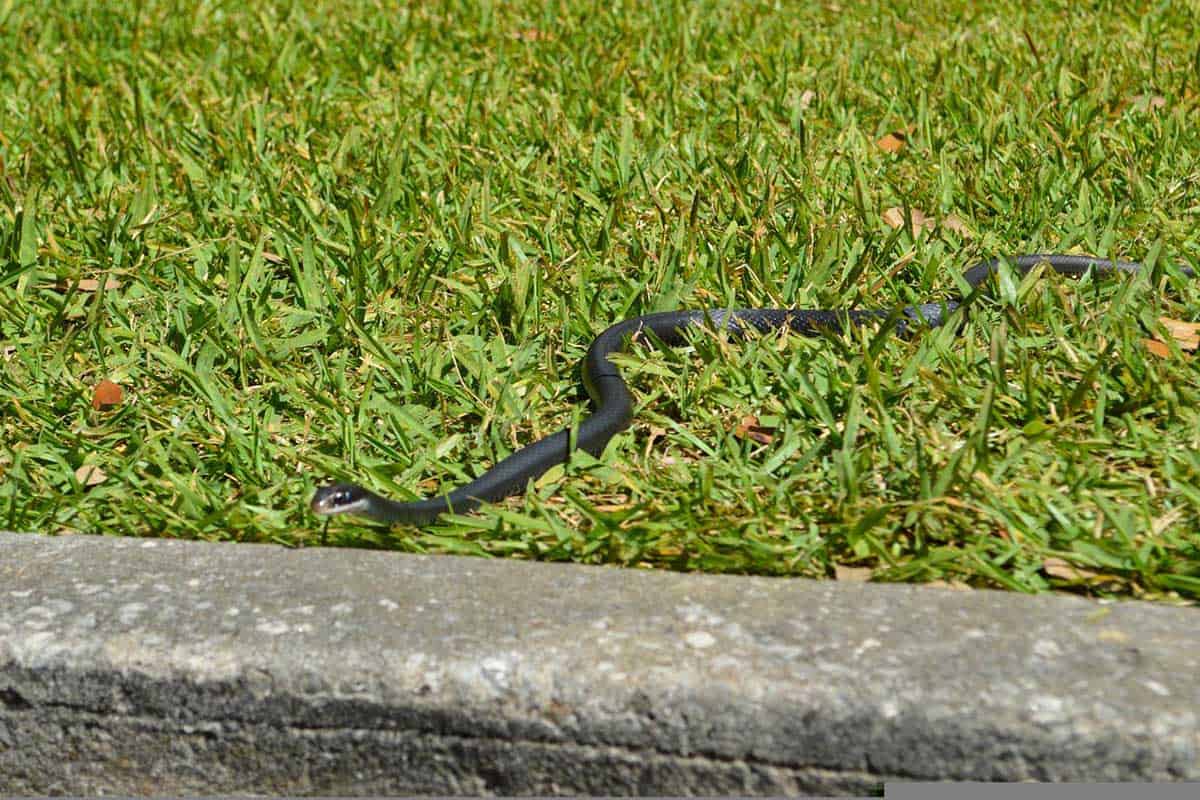 Snakes come in all sorts of different colors and patterns. Different colors and patterns can be beneficial for snakes, some allow for snakes to camouflage into their surroundings better while some colors or patterns are a warning to potential predators to not mess with them. In this article however, we will be discussing black or mostly black snakes found in the state of North Carolina.

North Carolina is home to 37 different species of snake. Six of these species are venomous, and several of these 37 species are black, or mostly black.

This can make it difficult to tell them apart, which is why it is so important to never pick up or approach a snake that you can not accurately identify. Making a mistake could be dangerous!

It is no surprise why Black Racers are called Black Racers. They are all black with a light gray belly, and the underside of their chin is lighter in color in contrast to the rest of their body.

These snakes are very slender and move very quickly, hence the name racer. Black Racers are common throughout much of the Eastern United States and is found in many different habitat types- including more populated areas.

The Black Rat Snake, also known as the Eastern Rat snake is a variable species. In some parts of its range, like in Florida, this snake comes in shades of mustard yellow or burnt orange.

But in other parts of its range, like in North Carolina, these snakes are black or very dark brown with a checkerboard pattern on the belly. Black Rat snakes can be found in many different habitat types and are arboreal, spending much of their time up high.

Coachwhips, like Black or Eastern Rat snakes are another species that vary in color. In some parts of their range, these snakes are pink! But in North Carolina, Coachwhips are black and dark brown.

They tend to be darker in color towards the head, and then their color lightens closer to the tail. Coachwhips can only be found in the Southeastern portion of the state, and are actually the longest snake found in North Carolina.

While the Mud Snake sounds like a dull, drab snake, there is nothing dull about them! On their back or dorsal side, these snakes are all black, however these snakes also have a bright red and black striped underbelly that they may show off when threatened. Mud snakes are only distributed throughout eastern North Carolina where they inhabit swamps, marshes, and other wet habitats.

Like the Mud snake, the Carolina Swamp snake is a mostly black snake that is found in wet or otherwise aquatic habitats like swamps and marshes. These snakes are all black with a brilliantly red or red/orange colored belly. They have a small range in North Carolina and are only found along the eastern coast of the state.

You may also like:  8 Species of Hawks in Washington State (Pictures)

Ringneck snakes are aptly named for the small orange, red or yellow band around their neck directly behind the head. Ringnecks tend to be dusty gray or black, with brightly colored yellow, orange and red bellies.

Ringneck snakes will curl up their tail, displaying part of their brightly colored underside when threatened. In North Carolina, Ringnecks can be found in habitat types that have plenty of moist soil, like woodlands or around streams.

However, in North Carolina, there are also black morphs, where they are virtually patternless and are almost completely black. They can be found in the mountains or coastal plains.

The Cottonmouth is another species of venomous snake found in North Carolina that varies in color and pattern. They can be light brown with dark brown bands, or they can be almost entirely brown or black.

Cottonmouths are known for their defensive display, where they will gape their mouth open, showing you the inside of their cotton-white mouth. Cottonmouths are found along the east coast of the state.