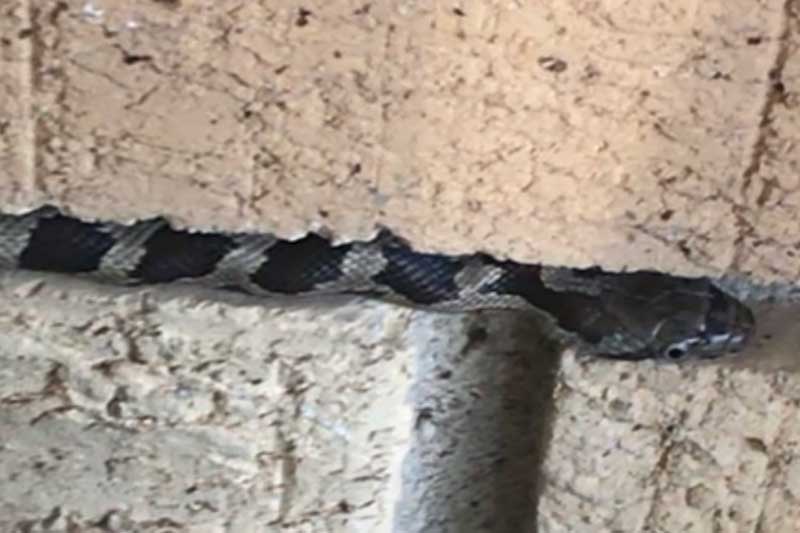 Despite snakes having no arms and no legs, they are able to get around almost anywhere. Snakes can use their bodies to wrap around branches and climb trees, traverse sand, slither over rocks and obstacles, and in some parts of the world flatten their bodies to glide (short distances). Given that they can do all of these amazing things, you may be wondering “can snakes climb walls?”.

In some circumstances, yes, snakes can climb walls. But not all snakes can, and not just any wall either. While seeing a snake climb a wall might sound like you worst nightmare, it is a pretty amazing feat for an animal with no limbs!

The short answer is yes, snakes can climb walls. But not all snakes are made for climbing walls. Some species that are fossorial and spend much of their time underground or under things on the ground are not able to climb walls, and do little to no climbing of anything else. Large bodied snakes like rattlesnakes and pythons and boas also cannot climb walls due to their body plan.

And while many snakes are amazing climbers, those that can climb walls at the very least need something to give them traction while climbing. This may be in the form of the grout lines from brick walls, rough surfaces on textured walls, or cracks and crevices in stone walls. This means that a snake would not be able to climb a completely smooth wall made of concrete or plastered walls.

Snakes need small cracks, grooves or ridges that allow them to push off of the surface and then find a similar point of contact somewhere else on the wall. This takes slow, careful and deliberate movements, meaning that you will never see a snake absolutely zooming up the side of a wall!

What kind of snakes?

In the United States, there are a handful of species of snakes that are known to climb walls. These snakes are species that are partially arboreal, or spend some of their time up in the trees or up high. These species are often long and slender, making it easier for their body to cling to even the smallest of ridges on walls.

Some of the snakes in the United States known to climb walls include:

How do snakes climb walls?

Snakes are essentially all muscle, and they use this muscle for all forms of locomotion. When climbing walls, snakes use their strength to press up and toward the next rough surface that will allow for them to rest on and push off of next.

The ventral scales (found on the underside of the snake) create small ridges and grooves on the snakes body that they angle on the surface they are climbing, this helps to create traction while they use their muscles to slowly move up the wall.

Can snakes climb up the side of a house?

Yes, snakes can climb up the side of the house if it is made of the right material. Houses with brick, stone or stucco exteriors provide somewhat climbable surfaces for snakes with many ridges and grooves to gain traction. While houses with smooth exteriors would likely not allow for a snake to climb it.

You may also like:  Can You Overfeed a Bearded Dragon?

Why do snakes climb walls?

Snakes do not climb up walls to terrorize the inhabitants of whatever is on the inside of the walls. Instead, snakes climb walls either to find a suitable place to shelter or hide, or to find food, which is actually most animal’s motivation behind their behaviors.

You could have a bird’s nest tucked away under an overhang on your house, or up on a banister that a snake is interested in checking out. Or maybe there is a cool, dark place for the snake to get into via climbing up your wall.

Whatever the reason, there is no real cause for alarm if you see a snake climbing up a wall.

Can snakes live in your walls?

Yes, if there is an exposed entry into a wall, then a snake could certainly climb inside and shelter there. But it would not live the entirety of its life inside a wall. Snakes need access to food, water and warmth, just like humans and would need to venture outside to get most if not all of these things. Instead, snakes may use the insides of walls as a safe place to shelter.

To ensure that snakes can not get inside your walls, then it is important to make sure that any walls, crawlspaces, etc. do not have any openings to the outside where a snake could possibly get in.

Even without limbs, snakes are incredibly talented at getting around. Their ability to climb up some surfaces appears to defy both gravity and logic. But some snakes are in fact capable of climbing walls! However, not all snakes can climb vertically up a wall, and not all walls are suitable for climbing.

In the United States, there are a handful of different snakes capable of climbing walls made of stone, brick, and other rough materials with grooves and ridges. While it may seem like it, snakes do not climb walls to invade homes or terrorize families. Instead, they are likely exploring a scent from a prey item or looking for a safe place to hide.