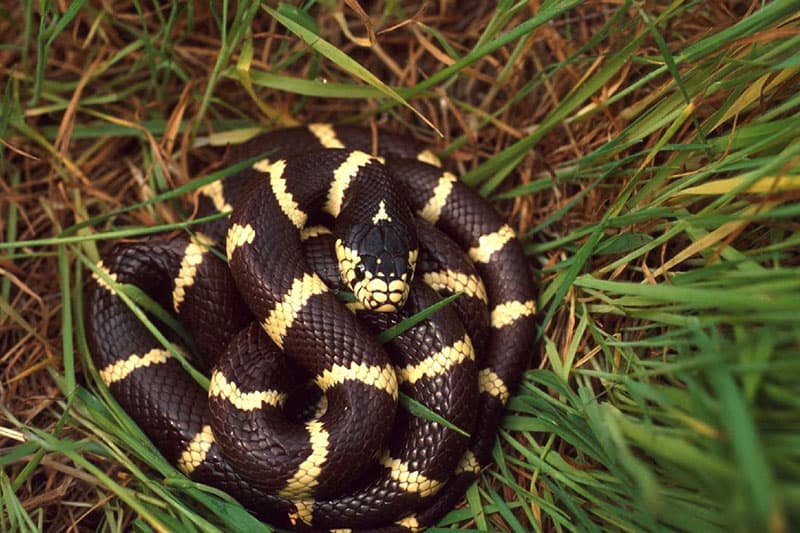 Kingsnakes are a diverse category of snakes found all throughout North, Central, and South America. They live in a wide array of habitats such as deserts, rocky outcrops, forests and swamplands.

They often have bright bands of red, yellow, and black coloring, but are also found in an assortment of other colorations and patterns.

Though they’re found plentifully in the wild, the kingsnake is also a very popular choice of pet snake in captivity.

There’s a reason these guys are called “king” snakes, though. Kingsnakes are a unique species of snake that possess more than a few interesting traits.

While the bright red and yellow colors of the Kingsnake may make them appear venomous, their coloring is actually an adaptation to help them survive.

Kingsnakes feature patterns and colors that mimic the venomous coral snake, which keeps predators at bay.

However, kingsnakes aren’t venomous at all!

In the wild, they use constriction to suffocate and eat prey.

The terms venomous and poisonous may sound like the same thing, but in actuality there’s a big difference between the two.

Since most snakes bite in order to spread their toxins, they’re considered venomous, not poisonous.

However, there are some snakes that are poisonous if eaten, such as the common garter snake. Other reptiles, such as certain frogs and salamanders are also poisonous.

Are Kingsnakes Harmful to Humans?

Kingsnakes are generally harmless to humans. While they have been known to bite and give off a musk when threatened or provoked, they do not impose much of a danger.

Individual personalities and temperaments can also vary from snake to snake, making some more quick to biting but others more docile.

Because kingsnakes eat other snakes, rodents, and various small animals, you won’t want to keep them around vulnerable small pets, but their ability to reduce pests in nature make them beneficial members of the ecosystem.

Are Kingsnakes Harmful to Dogs?

Kingsnakes do not possess any toxic venom, so they are harmless to pretty much all creatures aside from other snakes, lizards, rodents, and other small animals.

Though if a dog gets bitten by a nonvenomous snake like the kingsnake, it’s still important to wash and disinfect the wound if it breaks the skin.

Kingsnakes are found in North America, from southeastern Canada, all over the United States, to southern Ecuador. They are terrestrial snakes, meaning they spend more time on the ground than in water or in trees.

Their habitat is versatile, and they make their homes in forests, deserts, grasslands, on the edges of swamp lands and marshes, and even in human neighborhoods.

These snakes are medium sized, with an average length of about 3 ft. Most of them have bright, distinctive patterns with white, yellow, red, and black colorations. Some kingsnakes have only muted brown colorations though.

Kingsnakes typically mate from March until August. Males will fight and wrestle each other for a female, which can lay anywhere from 3 to 24 eggs in a clutch.

The mother snake leaves shortly after laying her eggs, which then hatch around two to three months later.

There are many varieties of kingsnake species found all over North America. Many of them feature different patterns and colorations.

The prairie kingsnake is one variety that’s brown with darker brown or gray blotching that runs the length of their bodies. They’re found in the midwestern and southeastern United States.

Another popular variety is the California kingsnake, which is one of the most popular breeds of pet snake as well.

Why Kingsnakes Are Actually Good

Kingsnakes aren’t venomous but will eat snakes that are venomous, making them beneficial to have around. They are also good for the ecosystem as they keep other species balanced, such as rodents and other lizards.

Are kingsnakes nocturnal?
The behavior of a kingsnake depends largely on where the snake is geographically located. The majority of kingsnakes are nocturnal, but in warmer climates they can be diurnal.

Can you keep a kingsnake as a pet?
Kingsnakes make popular pets as they can be tamed fairly easily, live up to 20 years, and are non venomous. However, it’s best to buy captive- bred snakes rather than take one from the wild.

How often do kingsnakes shed?
The frequency that a kingsnake sheds depends on the individual, but for a young, growing snake it can be around once every two months.

How often do kingsnakes eat?
Like other snakes, kingsnakes don’t have to eat every day. In fact, they can eat only a few times a month and be perfectly fine, depending on how large their meals are.

Are kingsnakes aggressive?
If a kingsnake is threatened it will bite and release musk, it may even mimic a rattlesnake by shaking their tails. However, they will not go out of their way to attack a human.

What do kingsnakes eat?
The most famous part of a kingsnakes diet is other snakes, including venomous types such as cottonmouths and rattlesnakes. They also eat mice, rodents, birds, and lizards.

How do kingsnakes kill their prey?
Kingsnakes constrict their prey to kill and eat it.

You may also like:  Do Bearded Dragons Make Good Pets? Pros and Cons

How does a kingsnake get its name?
The kingsnakes name comes from the fact that it eats other snakes — making it the king of snakes.