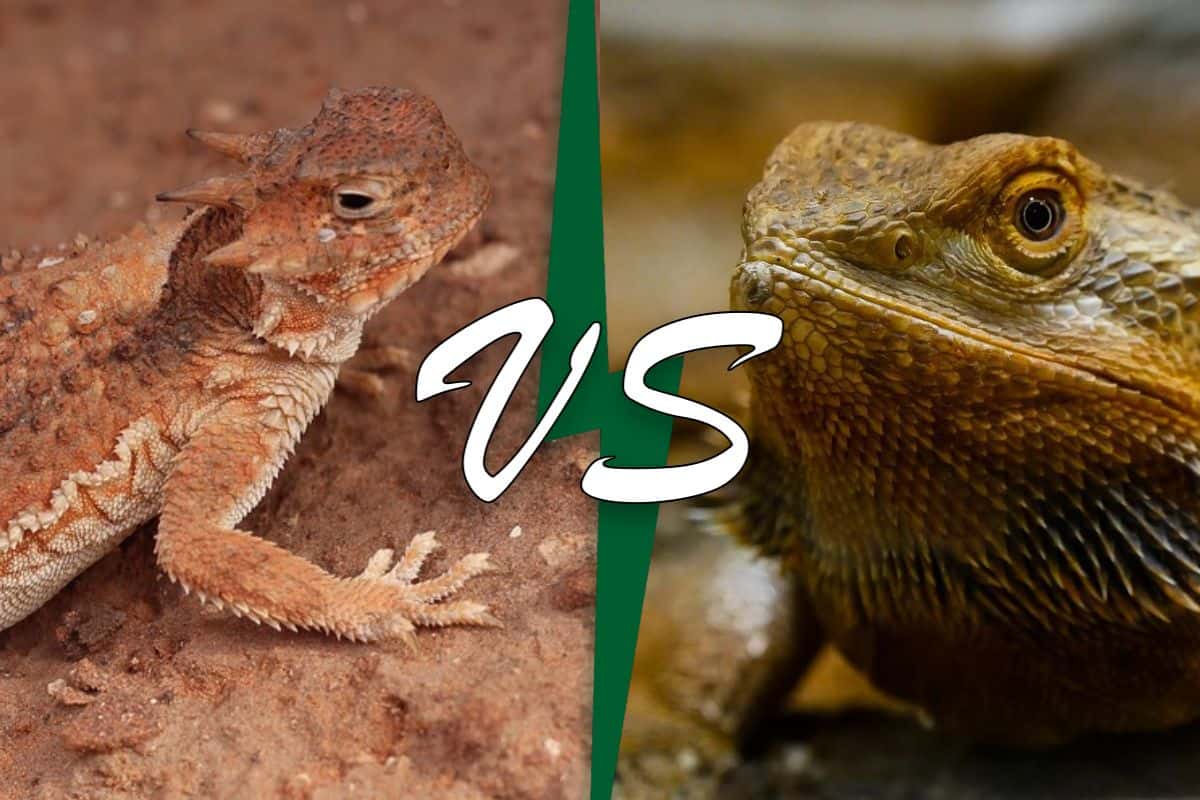 Bearded dragons are native to Australia and aptly named for their appearance. Horned lizards are simply some of the most unique lizards on the planet. These creatures both have physical traits that make them look alike, but these reptiles aren’t as similar as you might assume. Like many lizards, both of these creatures have a number of unusual and distinctive traits. Let’s compare the horned lizard vs bearded dragon in more detail.

Horned lizards have round, flat bodies, spiny backs, and true horns on their heads. Bearded dragons also have flat bodies and spiny scales, but both males and females have beards! Read on to learn more about how these lizards are different from each other.

1. They Prefer Different Types of Foods

Horned lizards are carnivores that primarily feed on ants. In the wild, these lizards tend to live close to anthills so that it’s easy for them to access their favorite food. Although they have a strong preference for ants, they also eat other small insects and invertebrates.

Unlike many reptiles that are kept as pets, bearded dragons are omnivores. While they enjoy eating insects like crickets, they also dine on small vertebrae as well as fruits and vegetables. The bearded dragon isn’t a picky eater and tends to eat a varied diet, regardless of whether it’s kept in captivity or living in the wild.

2. Bearded Dragons Have a Longer Lifespan

3. Horned Lizards Can Squirt Blood From Their Eyes!

Many animals have natural defense methods, but when a horned lizard is corned, it can do something incredibly bizarre. These lizards are able to contract the muscles in their eyes and shoot out a stream of blood! Horned lizards may also release blood if they need to wash dirt or dust out of their eyes.

A horned lizard can shoot blood several times if it needs to, but this reptile also has other ways of protecting itself. This reptile has natural camouflage and can blend in perfectly with its desert habitat. Bearded dragons also have strong camouflage skills, and some species can even change their color!

While a horned lizard may show unusual defense strategies when it feels threatened, bearded dragons tend to be very calm. These lizards are known for being docile, which is one of the many reasons that people like to keep them as pets! In fact, bearded dragons are so easy-going that they can even be dressed up in human clothing!

5. Horned Lizards Are the State Reptile of Texas and Wyoming!

Not one, but two states have claimed the horned lizard as a mascot! It’s the official state reptile of Wyoming, and in 1993, the Texas Horned Lizard was declared to be the state reptile of Texas! This lizard is even the mascot for Texas Christian University.

You may also like:  Water Snakes in Florida (11 Species With Pictures)

6. The Bearded Dragon Is Known for Its Intelligence!

The bearded dragon is a highly intelligent creature that is able to learn from others and solve problems. A study conducted by the University of Lincoln found that bearded dragons could be taught to open doors to access food. Bearded dragons can also be leash trained and can even learn to do tricks!

Even in the wild, bearded dragons are able to wave at each other as a demonstration of species recognition. When bearded dragons want to show interest in each other, they bob their heads up and down. These astonishingly smart lizards can communicate in all kinds of ways.

7. There Are 21 Horned Lizard Species!

The size of bearded dragons and horned lizards can vary based on the species, but bearded dragons tend to be quite a bit larger. When a bearded dragon is fully grown, it usually measures between 16 and 24 inches. They usually weigh between 0.6 and 1.1 pounds.

Giant horned lizards, which are the largest horned lizard species, can grow to be more than 6 inches long. Many species are significantly smaller than that, with most species measuring anywhere from 2 to 5 inches long. When a horned lizard is fully grown, it weighs between 25 and 90 grams on average.

Since horned lizards have very round bodies, they can easily be mistaken for toads, especially when they’re seen from a distance. In fact, these reptiles are frequently called horned toads! Although a horned lizard might look like an amphibian, it’s actually a reptile that lives on land.

With that said, if you’ve ever mistaken a horned lizard for a toad, you’re not alone. The scientific name for the horned toad is “phrynosoma,” which actually means “toad-bodies.” Like toads, horned lizards also tend to be sluggish and may remain motionless when they’re hiding from predators.

10. Bearded Dragons Can Be Born With Two Heads

The average bearded dragon has just one head, but these lizards can be born with two heads! It’s even possible for these two-headed lizards to survive and thrive. This phenomenon is rare, but it’s well-documented, with many examples of two-headed bearded dragons in both captivity and in the wild.

Why do some bearded dragons have two heads? This usually occurs when an embryo fails to fully split, causing twin lizards to share a body. When this happens, each lizard has its own brain, but the pair may share organs. Some two-headed bearded dragons divide up food in interesting ways.

You may also like:  13 Home Remedies to Keep Snakes Away

11. The Horned Lizard Is Under Threat

The bearded dragon, which is native to Australia, has a stable population. Unfortunately, that isn’t true of many horned lizard species. Many species, including the Texas horned lizard and the mountain horned lizard, are classified as endangered in parts of the United States.

Experts have many theories on why horned lizard populations are declining. Invasive species like fire ants have made it harder for lizards to get the food that they need. Urban development, pesticides, and predation from domestic animals like cats and dogs are other factors that have put the horned lizard at risk.