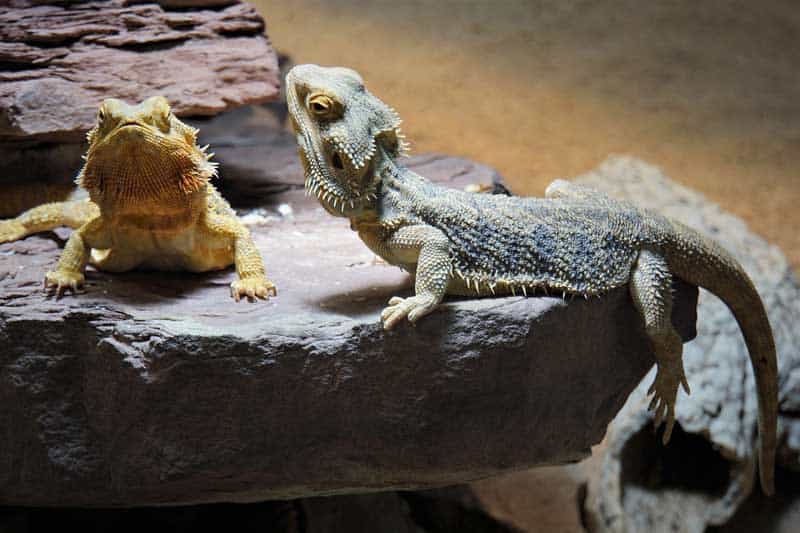 Bearded Dragons are one of the most popular lizards kept as pets in both North America and Europe. Their intelligence, unique name, and wild appearance makes them especially attractive to people looking for a relatively easy exotic pet. Affectionately called “beardies” by their owners, there’s more to this lizard than just looking cool in a vivarium. Here are 25 interesting facts about bearded dragons that you may not have known about your scaly friend.

1. Their name comes from their “beard” of scales around the neck

These scales act as both a mating display as well as a defense against predators. When they open their mouth, these scales puff out. When they’re used as a mating call, they change color and turn black, hence the beard!

2. They wave to acknowledge each other

Here’s a fun fact about Bearded Dragons. Just like humans, Bearded Dragons will wave when they see a familiar lizard. It can communicate that they see one another, but also can be a sign of submission when in the presence of a larger and more dominant dragon. They’ve also been known to wave at their owners, signaling that they recognize humans as well.

3. They have plenty of behaviors unique to their species

The most commonly known among pet owners is the head bob. Both male and females do this and, like the spikes, can be used as a mating signal. It’s also thought that this is a sign of dominance between two males competing for mates or territory.

4. They love to sunbathe

Like all lizards, Bearded Dragons are coldblooded, meaning they get their body heat from external sources. They’ll spend most of the daytime doing this, called basking, and another way they display dominance is laying on top of one another in order to soak up more sunshine.

Bearded Dragons are mostly calm and sedentary animals and content to bask and eat, but they’re deceptively fast. They can shoot away from you in what feels like a blink and be back just as quick.

6. They love going on walks on a leash

It sounds crazy, but a Bearded Dragon is the easiest lizard to train to walk on a leash. It makes for great stimulation for them, plus the looks you’ll get on your walk are always worth it.

Bearded Dragons actually have the ability to inflate themselves with air in order to increase their buoyancy. Not all enjoy the deeper water and most are content to lay in the water and bask, but some love to swim as a special enrichment treat. When they swim, they move in a way similar to crocodiles by swinging their tail back and forth like a rudder.

8. They can regrow their teeth

Beardies may not be able to grow back a tail, but they can grow back teeth! They’ll occasionally lose their front teeth when trying to catch prey or tear apart food, so it isn’t anything to be concerned about.

9. They can sleep standing upright

Bearded Dragons have the ability to lock their hind legs, which allows them to hold themselves in place upright. This is an advantage when having to sleep between rocks or in crevices, and they’ll often choose to lean up against something to help support themselves.

You may also like:  Do Bearded Dragons Watch TV?

They’re able to do this for the same reason as why they can sleep while standing up. When they run, their center of gravity shifts to their backside which lets them be faster, but makes it more difficult to keep their front legs on the ground.

11. You can tell their mood from their scales

It’s very easy to tell how a Bearded Dragon is feeling at any time. Along with their “beard”, all of their scales will puff up when they’re feeling stressed or unhappy. A happy Beardie has flattened down scales that almost feel smooth to the touch.

12. They can change their skin color

While not as immediately noticeable as a chameleon’s, the Bearded Dragon can also change its color. They adjust it in order to take advantage of different temperatures with darker scales able to absorb more heat and lighter scales able to reflect it.

It can be incredibly difficult to determine the sex of a Bearded Dragon as there are no real differences in appearance. Both are a wide variety of colors and sizes, although the males do tend to have larger heads and larger and darker beards.

14. They make a hissing noise when defending territory

Beardies are known for being territorial and will defend their turf from other dragons by not only puffing out their beard, but also by hissing to let the opponent know they mean business.

15. They’ll hibernate during the colder months

Like most cold-blooded animals, the colder months make it harder to regulate body temperature. To counteract this, Bearded Dragons will stop eating and drink water sporadically while sleeping for most of the day.

16. Female Bearded Dragons have the ability to give birth twice

This is entirely unique to Bearded Dragons where the female can save reproductive material from the male to fertilize herself again.This enables the female to lay two clutches, or sets of eggs, from a single mating. They can number from 15-30 eggs per clutch. This allows for her to maximize the number of offspring while minimizing the interaction with a potentially hostile male.

17. The sex of Bearded Dragons can be changed by incubation temperature

If the temperature is unusually high, the eggs will develop as females and if it’s lower then they will be more likely to be male. Furthermore, warmer weather during development is thought to impact their learning ability, slowing it down drastically the warmer the temperature.

18. Almost all the Bearded Dragons in captivity in the US and Europe are bred to be pets

Australia actually banned the export of Bearded Dragons in the 1960s, and now has some of the strictest animal export laws in the world. This in turn makes the ones bred in captivity more docile, and therefore a better and happier pet.

19. They love to climb trees

Bearded Dragons are called semi-arboreal, which means they like to spend a lot of time in trees and bushes. They prefer to be up higher, and their claws have a strong grip that lets them hold onto rocks, trees, and bushes.

Despite all the social habits Bearded Dragons display with one another, like the waving and the head bobbing, those are usually just to show either submission or mating behaviors. Bearded Dragons should never be kept in enclosures with other dragons for their physical and emotional well-being.

This is made most apparent by their eye placement. Bearded Dragons’ eyes are on the side of their head to have a wide view. They need to look out for other lizards, birds of prey, and dingos. It’s very cute for pet owners though because it means your dragon will focus on something by tilting their head and looking at it with their one eye.

Before you get worried, it’s completely harmless to people. However, it isn’t harmless to the insects that they eat! Plus, it’s always fun to refer to them as a technically poisonous lizard and impress your friends.

23. Fireflies and avocados are poisonous to them

Fireflies contain a type of steroid that can really harm a Beardie’s heart and can be fatal. As for avocados, they have a high amount of oxalic acid which in low doses can make your dragon very ill. Large amounts over time can be fatal, so keep the guacamole away from your lizard!

There are new studies that have determined that Bearded Dragons have all the rods and cones necessary to see color. This is an evolutionary advantage because they’re omnivores, and it’s important for them to be able to distinguish different fruits and vegetables. It’s believed this is why Beardies love carrots, since that bright orange is especially tantalizing.

A relief to pet owners everywhere because it means you can handle them without any fear of being peed on! Because they come from the desert, every drop of water needs to be conserved. They get rid of waste via a white powder that contains uric acid, and it usually comes out with all the other waste!