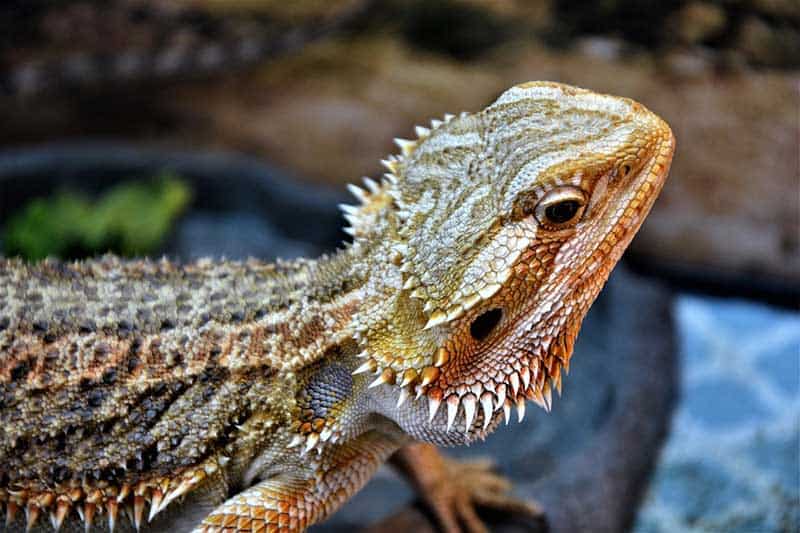 Bearded Dragons have a lot of unique and interesting behaviors. For instance, have you noticed your bearded Dragons waving to you from across the room? Want to find out why they do that and much more? Below is a list of all the behaviors your dragon is likely to exhibit at some point or another.

Bearded Dragons do wave. It is their way of showing submission. They might feel threatened by you, another animal in the home, or sometimes their own reflection. They are simply saying, Hey, I realize you are bigger, and I do not want any problems.

Have you Wondered why your dragon licks you, the floor, the air, the family dog? They are smelling you. Licking is how they get a better sense of their environment.

Bearded dragons have a Jacobson’s organ in the roof of their mouth, which they use to catch particles with their tongue and can, in a sense, smell their environment more thoroughly.

Are they licking you a lot? I think it is safe to say they probably enjoy your scent and company.

If a Bearded Dragon’s mouth is open and their beard is puffed up and black, they are probably not a very happy dragon. Opening their mouth and showing their beard is a defensive posture because they feel threatened. Your Beardie is ready to attack if they feel the need.

4. Stretching out their Beard (Beard Flexing)

Ever catch your dragon with their beard stuck out in the morning, but It doesn’t last long? You just watched your bearded dragon Stretch their beard, also known as beard flexing.

Bearded dragons are capable of changing color. They do not do this in the same sense a chameleon can and does, but they can lighten and darken. A beardie will darken and lighten to help them soak up more or less sun depending on their body’s temperature. If they are Darker, they are trying to warm their body up at a quicker pace.

A black beard can mean various things in Bearded dragons.

Dragons will turn their beards black if they are displaying signs of dominance; aggressiveness, scared, adjusting to life outside of brumation or during mating season.

During mating season, a black beard is predominantly viewed in males, and you typically will not see this behavior unless you have a male and female in the same home.

Bearded Dragons puff up for a few reasons.

You will find your Beardie will puff up when they are doing something they enjoy. They will puff up during a bath if the water is too high. Puffing up will allow them to float.

Bearded dragons will also puff up if they are trying to look intimidating. They may do this when confronted with another dragon or when approaching their prey.

Bearded dragons flatten out, and it is adorable. Bearded dragon owners have dubbed this behavior as pancaking. When a bearded dragon pancakes, they are trying to regulate their body temperature. By flattening out, they increase the space they have to absorb heat. You can find them doing this at different times, but usually first thing in the morning.

If a bearded dragon continues to do this often throughout the day, their tank temperatures are probably lower than they should be. If this is the case, a higher wattage bulb may be needed.

Heading bobbing can be a sign of dominance. It can also be viewed during mating season when a male is trying to impress a female.

Bearded dragons will close one eye for multiple reasons, not all serious, but some are. Dragons will close one eye so they can focus more clearly on a specific object, like prey. This behavior is normal and nothing to worry about, but there are a few reasons they could be doing it that could be serious. Your Beardie could have a damaged eye; they may have an infection, parasites, mites, or some other underlying cause that means a trip to the vet.

When a bearded dragon puffs their eyes, they might have something serious going on like an infection, but it’s not an immediate cause for concern even though it does look very concerning, especially if this is your first time experiencing this behavior.

Bearded dragons will puff their eyes as a means of stretching them during shedding. Puffing out their eyes helps remove and loosen up the shed around their eyes.

A Bearded dragon will run from you for a few reasons; they are still not used to your presence and are afraid of you or do not want to be messed with. You may have startled them. In which case, you may need to watch how you approach your bearded dragon, slowing down and letting them know you are there before reaching for them.

Digging can be noticed right before brumation. Your dragon is trying to find a comfortable place to sleep. Digging can also be seen in females who are getting ready to lay eggs.

Hissing is a sign of aggression in Bearded Dragons, They are scared, startled, or angry, and they are warning you or other animals to back off.

Twitching is a sign a Bearded Dragon might be lacking crucial nutrients like calcium and vitamin D. Without these essential nutrients, a Beardie can develop MBD (metabolic bone disease). MBD can cause a dragon to become listless, lose its appetite, even become deformed, eventually leading to death if left untreated.

Bearded dragons are known to glass surf when they are agitated and stressed.

You may also like:  20 Interesting Facts About Galapagos Tortoises

If a dragon keeps glass surfing, you will need to play detective to figure out the stressor.

However, if it does not happen regularly, and consistently it might not be stress at all and nothing to be overly concerned with.

Foot-stomping can typically be seen with head-bobbing. Bearded Dragons will do this when showing dominance or when a male is trying to impress a mate during mating season.

Gaping is a natural behavior seen in Bearded dragons.

If you notice your Beardie basking with its mouth open, this is a way of regulating their body temperature. If they are at their ideal body temp and do not want to get any warmer, they will do this to keep their temps from rising.