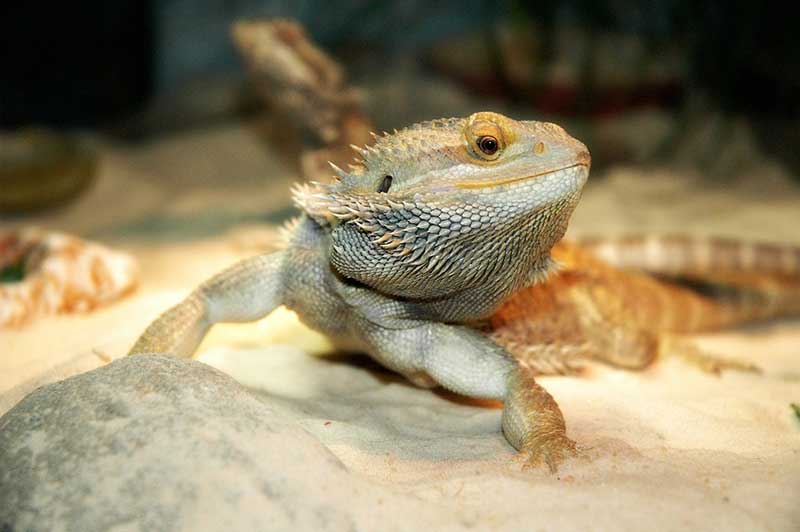 Bearded Dragons are the most beloved reptile pet in the United States, and for good reason. These strangely social, intelligent, and daytime active lizards have a devoted following rivaled by few others. One of the most interesting things about them is their mannerisms, and none is more distinctive than your Beardie waving their arm at you. This of course has many owners asking “why do bearded dragons wave their arm?”.

Why do bearded dragons wave their arm?

There are actually many different reasons a Bearded Dragon might be waving. The most common explanation is that it’s a submissive gesture that can also act as a form of greeting. If your Beardie is waving at you, they could be acknowledging your dominance (after all, you’re the one who puts the food out, and they recognize that), or at the very least acknowledging your presence.

Another meaning could be species recognition. Beardies will often perform this if they make eye contact with another Bearded Dragon. This goes along with submission, but could also just be them being polite and letting the other know they see them and don’t pose a threat.

If your dragon is younger, this arm wave can be a kind of act of surrender. They’re drawing attention to the fact that they’re just a baby and shouldn’t get hurt, and could be a sign that they’re intimidated by you. Don’t be sad if this is the case though, they’ll often grow out of it. Also keep in mind that this is dependent on personality, so if you have a more submissive and skittish dragon, they’ll be more likely to do the arm wave, but it doesn’t necessarily mean they’re stressed or surrendering.

Do only female bearded dragons wave?

Both genders wave! It’s been theorized in the past that this was part of a mating ritual because it was always observed beforehand, but now it’s believed that it’s simply a greeting that instigates most Bearded Dragon interactions.

How do I get my bearded dragon to wave?

The simplest answer is that you don’t. Bearded Dragons are incredibly intelligent and can potentially be trained to do it on cue, but this natural behavior is generally associated with submission and stress. To cause these conditions would result in more waving, but it isn’t always a positive thing. It’s recommended to just treat them with care and they’ll wave if they choose to!

Should I wave back at my bearded dragon?

Go ahead! Since it’s a common greeting, many Beardies enjoy being waved back at. You’re essentially telling them that you understand they’re recognizing you, and you see them back. It can even be a way to show your dragon you mean them no harm, as it can indicate that you’re being submissive to them in turn. The worst-case scenario is that you could confuse them, but the best-case scenario is sharing a moment of connection between two species, and that’s pretty darn cool.

Other common behaviors of Bearded Dragons

Along with arm-waving, Beardies are beloved for their laundry list of unique behaviors. These make them all incredibly interesting to interact with, and personality traits play a large role in these behaviors. The more time you spend with your dragon, the more of these behaviors you’ll get to observe!

There are several types of head bobs with sometimes contradictory meanings. Some indicate a passive or submissive presence, while others are a sign of dominance and aggression. Even though its usually the females that display the submissive bob and the males who start fights with it, it’s been observed as passive and aggressive in both male and female lizards. Overall, it’s another way that Bearded Dragons socialize and make their presence known.

Both male and female dragons can expand their beards at will. This is usually done as a defensive behavior as it makes them appear much larger and more menacing, but sometimes it’s done just to stretch a bit. It’s also occasionally associated with mating, but during mating, the beard generally darkens along with being expanded.

There are a wide variety of reasons your Bearded Dragon might be digging a hole. One of the most common is that they’re trying to create a more comfortable basking area. It can also be done by female dragons who are looking for a place to lay eggs, even if they aren’t currently pregnant. They may also dig to prepare for brumation, which is the reptile form of hibernation. Many owners recommend placing a small towel in the terrarium for them to go beneath instead of digging in the substrate.

This is the name for when your Bearded Dragon is sitting with their mouth wide open. This is how Beardies regulate their body temperature. If their mouth is open, it’s indicating that their body is at an ideal temperature and don’t want to get any hotter – therefore this is most often observed while they’re basking under their heat lamp.

Bearded Dragons are incredibly interesting pets, and many owners love them for all of their unique behaviors. If your Beardie is raising their arm towards you, pay close attention because that’s their way of talking to you! This simply means pay closer attention to what’s happening at that moment. Whether it’s because there’s something in their environment stressing them out that they want you to remove or simply because they want to acknowledge your presence, this can be an awesome moment of connection between you and your pet.