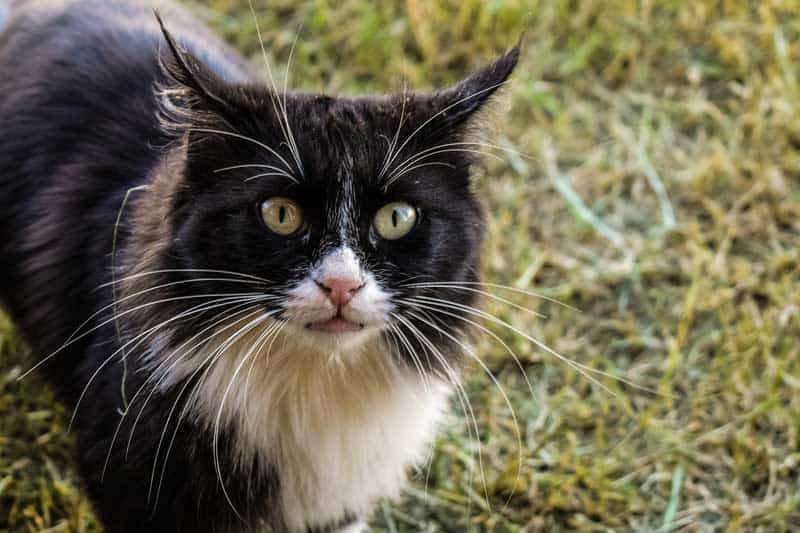 You may have seen a group of cats hanging around a dumpster. Or maybe, there’s a strange cat who has decided that your porch makes a perfect napping spot. Before you approach these cats you need to determine if these cats are feral, or just lonely strays. If you are unsure how to tell if a cat is feral, keep reading to find out how to differentiate between feral and stray cats, and find out things you can do to help the feral cats in your area, while also preventing the population from growing.

You may have heard the terms “feral” and “stray” used interchangeably. Despite this, there are major distinctions and stray cats and feral cats vary greatly in their behavior and the way they approach humans. Stray cats are cats that have either been house pets at some point in time, and abandoned or lost, or have had enough interaction with people to be properly socialized and accustomed to humans.

Feral cats have either been separated from humans for so long that they have lost their ability to socialize with people, or they have never been exposed to humans. Feral cats are fearful of people and respond more like a wild animal than a domesticated one to human advances.  Feral cats frequently live in large groups and socialize with each other.

So are feral cats a danger? You will find people on both sides of the argument, with some claiming that feral cats do not pose a threat to humans due to their avoidant behavior. Advocates for feral, or “community cats” assert that feral cats are not a rabies risk and that they do not spread disease.

Unfortunately, since it is difficult to impossible to vaccinate feral cats on the proper schedule, the fact remains that they are at risk for contracting rabies and passing it to other animals. They also have the potential to spread parasites, such as Toxoplasma gondii, in their feces. These parasites get into the soil, and can then spread through accidental ingestion.

A large population of feral cats can also prove detrimental to the local ecology. Cats are efficient hunters, and a large group of cats can devastate the small animal population. They will often hunt for fun, and abandon their kills. They are one of the factors in the declining number of songbirds and are believed to be responsible for the extinction of at least 63 species of birds mammals and reptiles.

1. Does it meow and approach you?

If a cat meows at you and approaches, it is definitely not a feral cat. Feral cats do not meow, domesticated cats reserve meowing for interacting with humans, because they have learned humans respond to vocal cues. If it is meowing at you it is either a stray or a cat with a home.

2. Does the cat seem to fear humans?

A cat that runs away at your approach, isn’t necessarily feral. It could be a stray that is starting to be afraid of people, due to mistreatment. It may also be a cat with a home that doesn’t care for strangers. You can tell more by how the cat responds to your continued presence. A stray will likely begin to relax. A feral cat will hide, and if it feels threatened will lash out.

If a dirty, unkempt, cat appears on your doorstep, it is most likely a stray. As a stress response to being lost or abandoned a stray cat will neglect its hygiene. Feral cats are used to living without human assistance and will maintain their coats, though their coats will seem rougher than the coat of an outdoor cat with a home.

A feral male will have a coarse, spiky coat, a broad head, and a thick neck. If you see a notch in its ear, it may be a feral cat that was part of the “trap, neuter, vaccinate” program.

If you see a cat out roaming at night, it is most likely feral. Feral cats tend to have more nocturnal behavior. Cats out and about during the day, are more likely to be strays or outdoor cats with a home. Strays and housecats are crepuscular, which means they tend to be more active at dawn and dusk.

Is it walking upright, with its tail in the air, or is it staying close to the ground? If you move does it freeze? If it is crouching and hesitant, it is most likely a feral cat. Feral cats will appear hyper-vigilant, as opposed to strays that are less likely to startle.

Feral cats congregate in large groups. Cats are social animals and the socialization that a formerly domesticated cat would typically get from humans has been replaced by the colony. They live together, and share hunting territory, though they do not hunt together. Feral females will share the raising of the kittens, though males have also been reported to share in kitten rearing.

There is usually an older female cat in charge, and they display behaviors such as social grooming. Feral colonies will even welcome in non-feral strays or other lone cats after a period of interaction.

What to do with feral cats

How to help them

If you don’t mind accepting responsibility for the “community cats” you can help keep them healthy by offering food. Dry food offers the same nutrients as wet food, but wet food will also offer some level of hydration. Keep the feeding area clean, so you do not attract insects.

Leave fresh water as well, to keep the cats hydrated. Cats are very prone to dehydration. If you are feeding the feral cats, keep the feeders in an area that won’t disturb the neighbors. Feeding the cats on a schedule will help also help stop them from getting into trashcans because they will have a reliable food source.

Feral cats may be used to the outdoors, but they still need somewhere to fo when the temperature dips. A winter shelter is easy and inexpensive to provide. Depending on the size of the colony, you may need more than one shelter. A plastic bin with a doorway cut into it or a styrofoam bin are frequently used DIY solutions. If you have space and a few extra dollars to invest in it, an insulated dog house could be an ideal solution, though you will want to reduce the size of the opening.

To provide the best insulation against the cold, fill the shelter with straw, and use the smallest functional shelter. This will allow their body heat to warm the space. Raise the shelter up, so that it is not directly on the ground. Try to find a place that is out of the rain, or cover the shelter with a tarp to keep it dry on the rain or snow.

There are actually some really cool options when it comes to outdoor cat houses on Amazon. Some are insulated and some are even heated.

Here are a few of the best feral cat shelters.

The best way to help the feral cat population is to keep it from growing. Humanely trapping, vaccinating, neutering, and returning the cats to their territory helps promote health in the colony, and will keep the population from expanding further. Neutering has benefits beyond just controlling the population. It will decrease the instance of certain cancers and will reduce aggressive behaviors.

If you are already committed to caring for the feral population, this is one of the best ways you can help them. if you are already feeding and sheltering the feral cats, you will be able to monitor their health, and possibly keep them on a vaccine schedule.

How to keep them away

1. Don’t feed a feral cat if you want them to leave

If you start feeding the feral cat population around you, you will not be able to get them to leave. Feral cats are capable of hunting, but like any animal, once they find a ready source of food, they will continue to return to it, and they’ll bring friends. If they become accustomed to having a caretaker, the sudden cessation of food will not deter them from hanging around. The best way to handle this is to not start feeding them if you don’t want to become a feral cat caretaker.

2. Call to have them removed if they’ve become a problem

Even if you’ve never fed them, you may still have feral cats making themselves a nuisance in your area. If you are interested in having them removed, keep in mind that most feral cats are unadoptable due to their lack of socialization. If you want them removed humanely, contact your local Humane Society. They will have a list of cat-caretakers and volunteers who participate in the “trap, neuter, release” programs.

Raccoons aren’t the only critters who like to get in the trash. Feral cats will also dig through your trash to get at a meal. Secure your trashcans tightly, to prevent cats from smelling a free meal, and knocking over your trashcans. Knowledge of an easy food source will keep the cats coming back, and bringing more with them.

Here are a few options on Amazon for keeping secure trashcans:

You may also like:  5 Best Binoculars for Wildlife Viewing (Buying Guide)

If you just want to keep cats out of your yard, using strong-smelling substances is a humane way of warning them off. Lavender, pennyroyal, citrus, and coffee grounds, are scent deterrents, that may help keep cats from wandering through your gardens. To stop cats from defecating in your flower beds, add items that are hard to dig in, like eggshells.

Feral cats present some challenges, such as their effect on local wildlife, however, their impact can be mitigated, and they do not need to be seen as a nuisance. People willing to take on the challenge of feral cat-caretaking by feeding them and providing them with shelter can help keep the populations healthy and prevent the spread of parasites and disease.

As Trap, Neuter and Vaccinate programs become more wide-spread the population of feral cats will be better managed. Of course, spaying and neutering our own cats, and keeping them inside will also keep the feral cat population from growing.