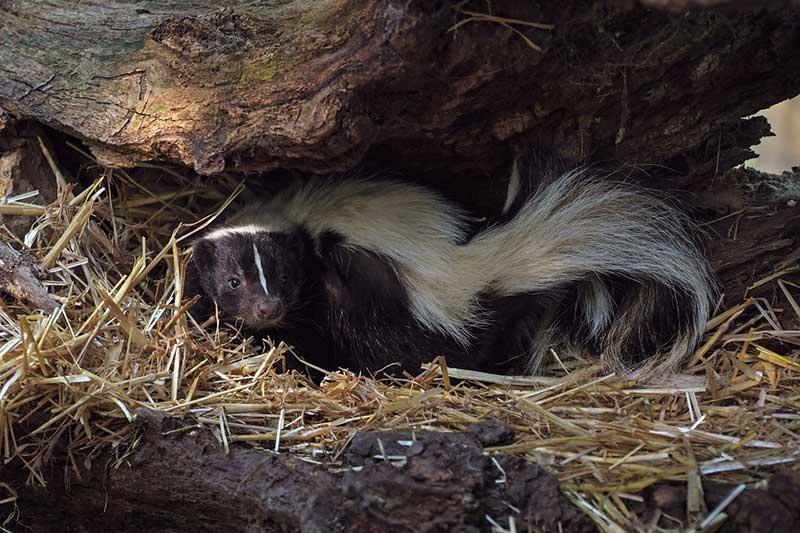 Skunks get a bad reputation, but this amazing animal has some of the most interesting chemistry and behavior of any local animal. Here are a few facts about skunks to help us better understand this misunderstood outcast.

1. Their stripes point to their weapon

That weapon being their well-known noxious spray. It’s believed that fight-or-flight animals, such as the skunk, have markings that draw the eye of potential predators towards the most dangerous part of themselves as a deterrent. Skunks will always prefer to intimidate a predator away then have to spray them.

2. They do a little warning dance

If the preemptive stripes don’t work, the skunk will then try to scare off a predator with a kind of dance. They’ll stomp the ground, slap their tail, and will even stand on their hind paws to better display their backside.

These intimidation tactics are very important because once a sunk sprays once, there’s a refractory period. After that first shot, the skunk is helpless for nearly 10 days!

Skunks are nocturnal, meaning they’re awake at night and have great night vision. It’s believed this is why they evolved their spray, as nighttime prey is more often attacked in surprise ambushes, which the spray is especially effective in.

Their spray is incredibly powerful. The smell of it can linger for days with some instances reporting people smelled even after weeks. This spray is also extremely irritating and can cause temporary blindness if you’re unfortunate enough to get sprayed.

6. The spray is also flammable

While not the purpose of the spray, it is a side effect of a chemical weapon made of thiols, which are the compound that makes the spray so pungent. These components are also found in garlic and onions and are highly flammable. 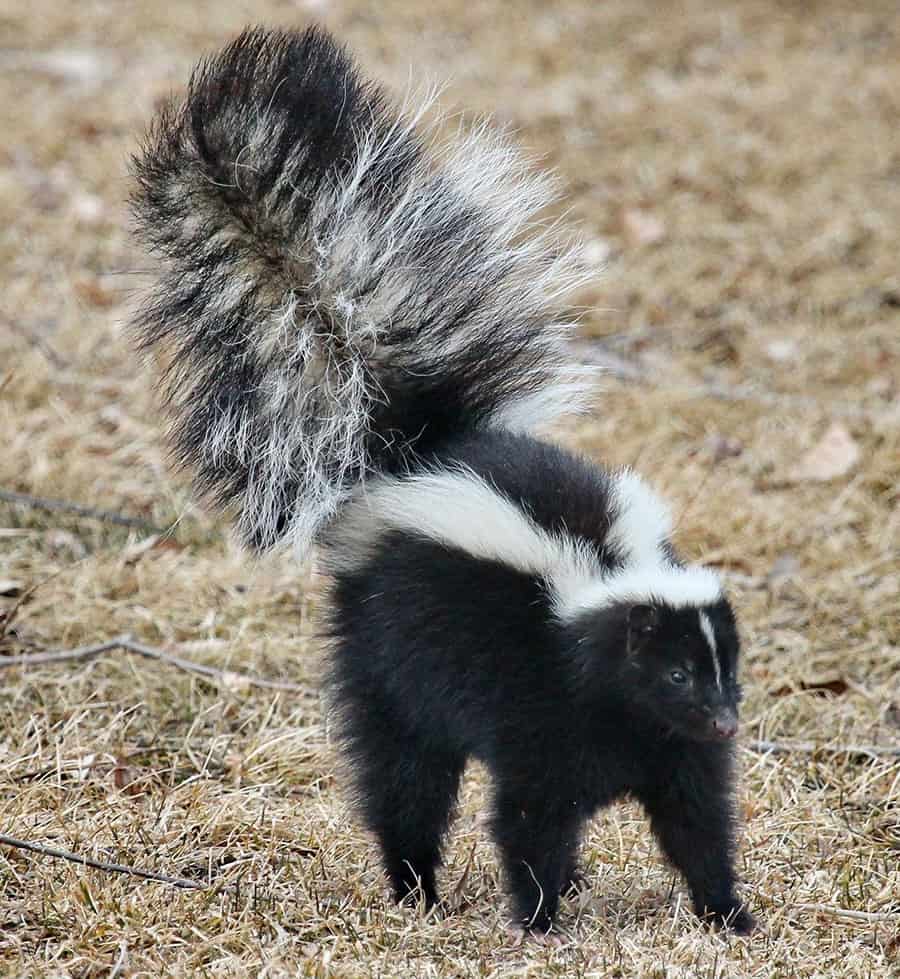 A common wives tale is that bathing in tomato juice will fix the odor if you happen to get sprayed by a skunk. Unfortunately, this isn’t true, as the tomato just covers up and slightly neutralizes the smell.

8. It can be negated by other chemicals

Hydrogen peroxide and baking soda are highly effective at getting rid of skunk smell. This alters the chemical makeup of the thiols and neutralizes the smell completely after a couple of hours soaking. Make sure to scrub everywhere though, as the compounds can linger under fingernails and in hair.

9. They’re illegal to keep as pets in 33 states (plus Washington DC)

Despite this, they’re actually a very popular pet in the other 17 states and have a devoted following. There are plenty of rules and regulations, plus their scent glands are removed so they can no longer spray. Those who have one are adamant that the animal makes a great pet, and is has been shown that skunks are smart, curious, and have individual personalities just like a cat or dog.

No, not just people who are nose blind or have no sense of smell. Approximately 1 in 1000 people have what’s called specific anosmia, or insensitivity to one particular smell. If this is you, consider yourself lucky.

You may also like:  How To Tell if a Cat is Feral - 6 Things To Look For

11. They cuddle for warmth in the Winter

Skunks don’t hibernate, but they do occasionally huddle in communal dens for warmth. This and during mating seasons are the only times skunks will associate with one another as they prefer to live and forage alone.

Skunks use their strong forefeet and long nails to dig for food like grubs and earthworms. They’re considered a nuisance on golf courses for this very reason. They can also damage foundations of buildings by digging underneath and using that as a burrow.

If you keep chickens, you’re probably aware of what a nuisance skunks can be to your coop. They like to raid poultry houses and steal eggs and occasionally a chicken or other fowl.

14. They’re the primary carriers of rabies in the Midwest

It’s important to exercise caution when coming across any wild animal, and skunks are no exception. They display both the “furious” form as well as the “dumb”, so be sure to avoid any skunks that are active during the daytime or don’t seem scared of humans.

This is just a testament to how concentrated this pungent mixture is. It’s common to smell your dog coming home before you see them if they happen to get sprayed by a skunk. That’s when you know it’s time to bust out the hydrogen peroxide and baking soda and give them a good hose down before they’re allowed back inside.

Skunks eat wasps and honeybees are immune to their sting. This makes them a nuisance to beekeepers, but also integral to keeping wasp populations low.

Skunks have been known to eat poisonous snakes such as rattlesnakes. They’re unaffected by doses of venom 100 times higher than those that could kill a household pet!

18. They keep mice out of your home

Although they prefer insects and grubs, skunks are not picky eaters. Especially during the colder months, they’ll stumble upon small rodents in wooded areas or near the garbage. That’s one less rodent in your walls looking for heat and food, and one more good thing about these amazing animals.