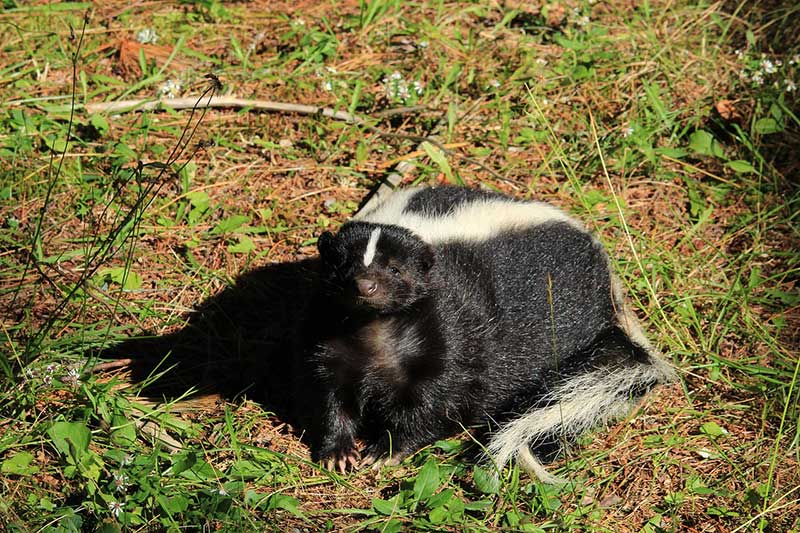 These critters will eat anything from mice to bees, skunks are mammals related to weasels, stink badgers, and polecats. While most of the 12 types of skunks are mainly relegated to the Western Hemisphere, there are some types that can be found elsewhere!

All types of skunks have many things in common. For example, they can all emit pungent odors whenever they in any way feel upset. Often, this can help these small animals scare off predators, whether these predators are humans or other animals.

There are many incredibly engaging facts about the 12 different species of skunks, all of which we detail below! Keep reading to learn more about these very interesting creatures! 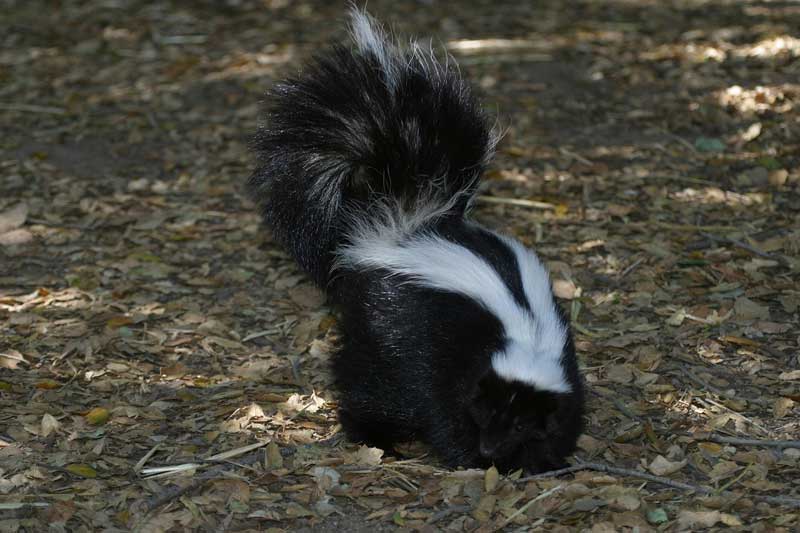 An instantly recognizable skunk, the striped skunk is what most people think of when they think of skunks. With two white stripes running down its back, striped skunks are also known to emit a pungent odor when they are scared, frightened, or in any way upset.

Striped skunks are native to North America, southern Canada, and northern Mexico. In North America, they can be found in various different parts, such as wooded areas, deserts, and even urban cities. However, striped skunks mainly prefer existing in open areas, if they can.

These types of skunks have a diet that consists of insects, small mammals (such as eggs and mice), and leafy greens. Striped skunks can also eat bees and wasps, and some desert skunks have been known to eat scorpions from time to time. Skunks can also eat snakes if necessary, as many skunks are actually immune to snake venom; this allows them to eat poisonous rattlesnakes with no issue!

Hooded skunks actually look incredibly similar to striped skunks, though careful observation can differentiate the two. Hooded skunks have longer tails, as well as a softer coat, than striped skunks. They can also have white stripes on their backs, though sometimes they do not; stripes can vary.

Hooded skunks are native to North America and Central America. As omnivores, their diet mainly consists of vegetation, though they can also eat small mammals, such as mice, or bird eggs.

All skunks, including the hooded skunk, actually have quite poor eyesight. As a result, the hooded skunk has a very good sense of smell and hearing, which are adaptations that help them survive!

Western spotted skunks look similar to your average skunk, except they tend to have various white stripes on their bodies that run in threes. Therefore, they have much more stripes than a regular striped skunk.

These guys are native to the western United States, northern Mexico, and southwestern Canada. Their preferred habitats can vary depending on what resources are in their given area, but you can find these creatures in wooded areas and in populated places. You can even find some living near canyons!

You may also like: How to keep skunks away – home remedies

Nocturnal, slender creatures, eastern spotted skunks have many different stripes that make it look a bit different from your average striped skunk. Native to the eastern part of North America, you can also find these skunks in small parts of eastern Mexico and Canada.

Just like the other skunks on this list, eastern spotted skunks are also omnivores. Throughout the seasons, they’ll eat different types of vegetation and small animals, depending on what is thriving at that time. For example, they’ll eat fruit and birds in the summer, yet mainly eat field mice and insects in the spring.

Southern spotted skunks, much like other skunks, are black and white animals that have the capability of emitting strong odors in order to scare off potential predators. They can also do this when they are upset. They can even direct their spray to directly attack predators!

All spotted skunks look very similar, see the image of the eastern spotted skunk. Though pygmy skunks are smaller.

One of the smallest types of skunks, pygmy spotted skunks are tiny creatures that can fit in the size of a human’s palm. Much like other skunks, these animals also have black fur with interesting white stripes. These skunks, however, are much more weasel-like than any other type of skunk.

For the most part, pygmy spotted skunks are native to a very small range of the Pacific coast of Mexico. They prefer to live in habitats that are bushy or wooded, though they don’t like dense forests. These skunks also tend to live off of a diet of vegetations such as leaves and berries, though they also eat small animals and eggs.

You may also like:  14 Examples of Arboreal Animals (With Pictures)

One of the largest skunks in the world, the American hog-nosed skunk has one huge solid stripe that runs down their black fur. Interestingly, their tail is completely white.

American hog-nosed skunks are native to North America and Central America. Because of the many different territories they live in, these animals can thrive in anything from canyons, to rocky terrain, to forests. As omnivores, their diet includes fruit and other vegetation, as well as small animals that they can catch.

Striped hog-nosed skunks are very similar to other skunks, as they have one white stripe that can separate into two down the body, though these animals are much smaller than other types of skunks.

These animals will eat a range of insects, vegetation, and small mammals. Some striped hog-nosed skunks have even been seen eating off of animal carcasses. They are found in parts of Mexico, Brazil, Peru, northern Colombia, and Venezuela.

Humboldt’s hog-nosed skunks can be black or reddish-brown color, though their stripes are always white, regardless of the color of their coat. These skunks are native to parts of southern South America. They actually mainly feed on insects, differing from many of the other skunks listed here, but they can also eat fruits and small mammals.

Many skunks, including the Humboldt’s hog-nosed skunk, can eat bees along with many other insects. Interestingly, these skunks can even go attack beehives to eat the bees and insects there! These skunks can also eat wasps!

Small black and white animals with differing white stripes (depending on each individual animal), Molina’s hog-nosed skunks tend to have all white tails. These creatures are native to South America and prefer to live in either open areas or shrubby forests. As they are omnivores, they can eat insects, snakes, small animals, and vegetation.

Interestingly, many skunks are immune to a snake’s venom. Therefore, these skunks can eat snakes with no problem. Snakes can also sometimes go after skunks, though skunks won’t be harmed by their venom like other animals would be, as they are immune to it!

Indonesian stink badgers are very interesting animals: they have the ability to emit strong odors like skunks, they have the nose of an anteater, and they have the face of a badger. These creatures tend to have either black or brown fur, though they can also have white tufts or stripes of fur on their body. Every animal is unique in what types of patterns or stripes it will have.

Normally found in southeast Asia, the Indonesian stink badger can typically be found in mountain areas. They are small animals, but they can protect themselves, though they tend to be quite tame around humans (as long as they don’t feel threatened).

Native to islands in the Philippines, Palawan stink badgers are very interesting skunks. They have long and pointed noses, stocky bodies, and tend to have dark brown fur. Their fur can also have yellow and brown patches on their body.

You may also like:  30 Commonly Asked Questions and Facts About House Mice

Interestingly, not much is known about the Palawan stink badger. These animals are considered to be vulnerable, which means that they are likely to become endangered. However, many scientists believe that these creatures are very similar to Indonesian stink badgers in how they act!