In humans and animals, females bear the burden of child bearing which is energetically expensive and taxing! However, like most things there is an exception to every rule. In the animal kingdom, there are a few different types of animals where the father takes on this rule. In this article, we will introduce a group of male animals that give birth.

Let’s have a closer look!

The 3 types of male animals that give birth

There is a single taxonomic family in the animal kingdom where the males are responsible for birthing their young. This group of animals are fish in the family Syngnathidae. While the name Syngnathidae probably sounds foreign to most, many people are likely familiar with at least one of the types of fish in this family.

Fish in this family include Seahorses and their relatives, the Pipefish and Seadragons. These animals are marine organisms and are found in tropical and temperate seas and oceans throughout the world.

Fish in the family Syngnathidae are characterized by having long, tube-like snouts and rigid bodies covered with bony plate segments. Unlike other fish, they lack pelvic fins and rely on their dorsal fin to maneuver around. This slows them down significantly and they often hover rather than propel themselves in any sort of direction.

In addition to their uncommon body plan, this group of fish have the unique ability to shift the responsibility of child bearing from female to male. First, the female will lay her eggs and transfer her eggs to the male. Male seahorses have a specialized pouch for the eggs, while Pipefish and Sea Dragons may attach the eggs to their tails.

The male then fertilizes and carries the eggs for the duration of the incubation period. During this time, the males will ensure that the eggs have nutrients and can even provide immunity to pathogens to their offspring.

Let’s learn about each one of these types of animals. 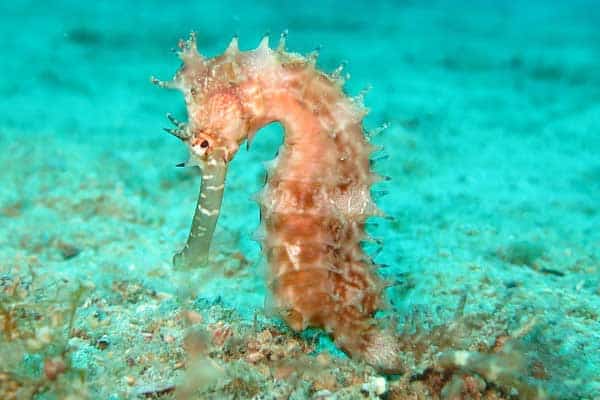 Seahorses are likely the most recognizable animal on this list, and have even made an appearance in the Disney films “The Little Mermaid” and “Finding Nemo”. Of the male animals that give birth, the Seahorses are the most advanced.

Male Seahorses have a specialized pouch on the frontside of their tail that they use to carry their young. During mating, the female can transfer up to 1,500 eggs at a time. From there, the male fertilizes the many eggs. The fertilized eggs then attach themselves to the inside of the male’s pouch and are encapsulated with a spongy tissue.

During the gestation period, the male provides the eggs with nutrients, hormones, and an overall safe environment for development. This period can last anywhere between 9-45 days. Then, the babies begin to hatch while still inside the pouch. When it is time for the male to give birth, he pushes them out of the pouch with quick muscular contractions.

When born, the babies are very, very small and therefore very vulnerable. In fact, less than 1% of the hatchlings survive to adulthood, which is why Seahorses tend to produce such large clutches. The male will then begin the mating and gestation cycle again just days after giving birth.

You may also like:  10 Strongest Animals on Earth (With Pictures) 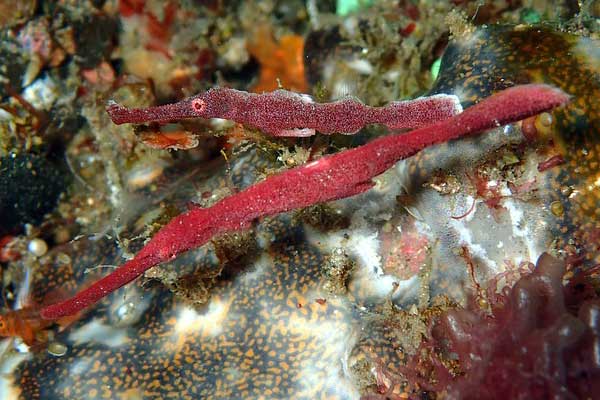 Pipefish get their name for their long, cylindrical, pipe-shaped bodies. They essentially look like a stretched out Seahorse. They are fairly small fish and grow on average to be 14-15.5 inches long.

Pipefish are unique from their relatives for the fact that some species have a pouch, like Seahorses while others attach the eggs to the underside of their body. Eggs are transferred from the female to the male following a courtship dance where both the male and female will wiggle and shake, indicating that it is time to mate.

The female will then deposit the eggs into the pouch or underside, during which both male and female will float upwards together. In the presence of a threat or predator, the female may deposit more eggs than she normally would in order to increase the chances of her offspring’s survival.

Caring for the offspring requires a lot of nutrients and energy from the male. In some cases, the male may cannibalize their own offspring and consume the embryos which is referred to as filial cannibalism and is actually fairly common in the fish world. 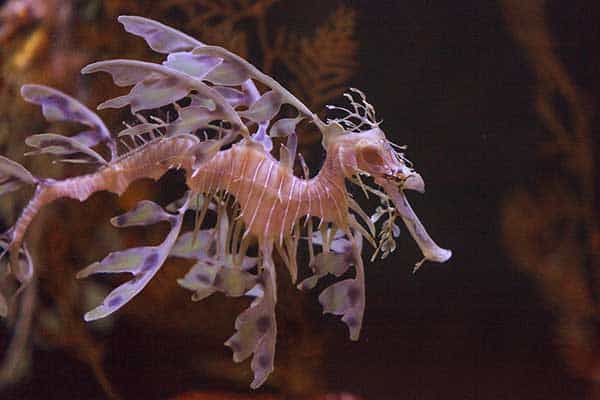 Sea dragons are an interesting group of fish, closely related to Seahorses. There are only three species, all of which can only be found in the warm coastal waters of Australia. The most notable and well known species is the Leafy Sea Dragon, which has leaf-like fins that helps them to blend in with marine vegetation.

Male Sea dragons do not have a pouch as Seahorses and some Pipefish do. Instead, they carry their offspring on the underside of their tail where they have a brood patch. Following mating, female Sea dragons deposit up to 250 eggs onto the male’s brood patch. The brood patch provides oxygen to the young during development.

Once the eggs have been attached to the brood patch, the male will then turn his tail upwards and fertilize the eggs. Depending on the species, it can take anywhere between one to three months for the eggs to hatch. Similar to other fish in the Syngnathidae family, the offspring are incredibly small and are independent from birth.

Baby Sea dragons may actually stick around the area where they hatched to feed on the nutrient rich leftovers from the embryos that they emerged from. The egg sacs can actually last up to a few days before the tiny Sea dragons need to forage and find their own food.