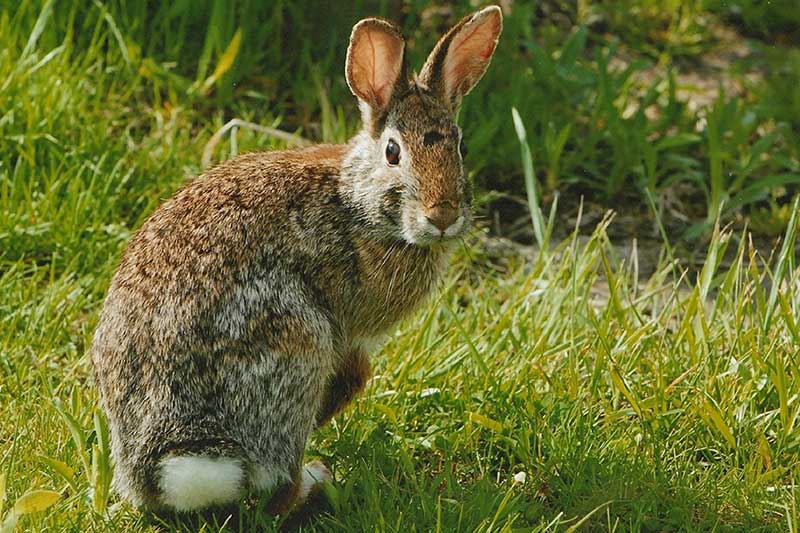 Rabbits can be found throughout all of the United States. They’re the most widespread mammal in North America and also the most common prey animal. They make up for this by being well-known prolific reproducers and can have up to seven litters in one year! There are only three native species of rabbits in Texas, not including the Black-tailed Jackrabbit, which is technically a hare.

3 Species of Rabbits in Texas (and one Hare)

The Eastern Cottontail is considered to be the most prolific of rabbits in Texas and the most common rabbit species in North America. They can begin reproducing as early as two months old and generally have three to four litters a year, although they have the capacity to have up to six or seven! It gets its name from the fluffy white tail that resembles cotton.

This rabbit lives in open grassy areas, clearings, and old fields that support abundant green grasses and herbs. The most essential component for these rabbits is the presence of dense shrubs they can use as escape cover nearby the open foraging areas. They’re active year round and generally stay close to their original homes and only venturing out for food or water. You’re most likely to find these animals out and foraging when visibility is limited, such as rainy or foggy nights and they like hanging around farm fences within Texas.

The Swamp Rabbit is the largest species of cottontail rabbit and, as the name suggests, is found in the swamps and wetlands of the Southern United States. This species has a strong preference for wet areas and it will willingly take to the water and swim. Because of this, it’s most abundant along the Gulf of Mexico coast of Texas where they spend most of their time in depressions they dig in tall grass or leaves. Normally their mating season is between February and August, but it can occur year-round in Texas due to the heat.

The Swamp Rabbit is a nocturnal rabbit. It prefers to forage at night where there are fewer predators, with its main predators as domestic dogs, American alligators, and humans. The Swamp Rabbit uses its swimming skills not to evade capture, but rather by laying still in the water surrounded by debris with only their nose visible. This is the second-most commonly hunted rabbit hunted for both fur and sport, as their fur is specially adapted to the colder water and is water-resistant.

The Desert Cottontail is one of the more social cottontails in Texas. While the Eastern Cottontail and Swamp Rabbit prefer to forage alone, the Desert Cottontail will often gather in small groups to feed. This is especially helpful when on the lookout for predators, as the Desert Cottontail relies heavily on their hearing and it’s helpful to have larger groups on watch. They’re most likely to be found on either grasslands or cactus deserts on the western half of Texas.

This rabbit is specially adapted to the desert like many animals in the area, where they rarely need to drink water. Instead, they get most of their water through the food they eat, including cacti and the juicy pads of prickly pears. They’re also adept thermoregulators with their ears taking up 14% of their body size.

Hares are not technically rabbits, but they do belong to the same Lagomorpha order of mammals so are distantly related. Hares are larger animals with longer ears. The Black-Tailed Jackrabbit’s pregnancy lasts for 42 days, compared to most rabbits who have a gestation period of 30 days, and the hares are born fully developed, complete with fur and open eyes. Female hares don’t build nests either, preferring to give birth in something as simple as a depression in the ground.

Therefore, the Black-Tailed Jackrabbit isn’t as abundant as the other types of rabbits, but it is more distinctive. Furthermore, unlike these rabbits, the Black-Tailed Jackrabbit will try to stand its ground against humans and other animals. They will stand on their hind legs and stare you down until one of you makes a move, where they’ll then turn tail and run. This jackrabbit can run up to 30 miles per hour, and can jump 20 feet to avoid capture.

The Black-Tailed Jackrabbit can be found all throughout Texas in meadows, prairies, desert scrubland, and farmland. This jackrabbit rests during the day and feeds in the late afternoon and at night. It’s common for farmers to report seeing their large reflective eyes in the dark if a flashlight is shined on them due to their fairly strong night vision.