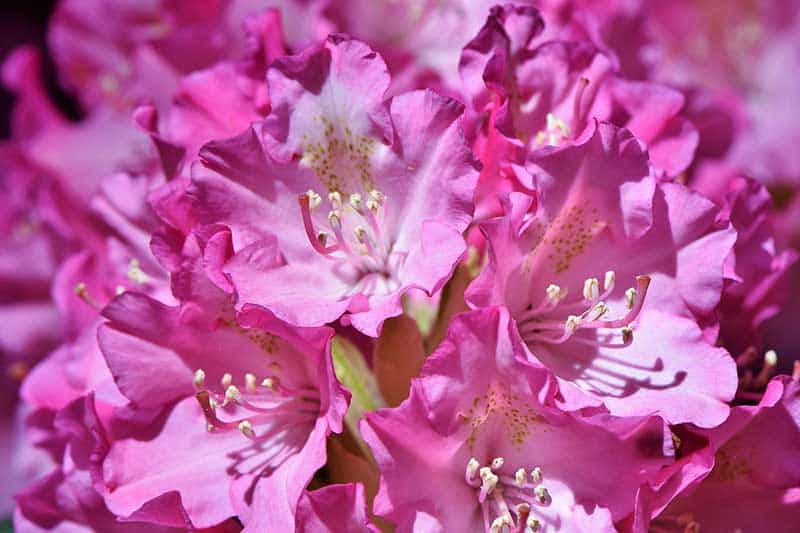 A common question asked by people visiting Great Smoky Mountains National park during the spring and summer months is, when do the Rhododendrons bloom in the Smokies? And where can I see them?

Rhododendrons are fairly common plants. I know that where I live, most houses on the street will have at least one bush in their yard. So what makes the Rhododendrons in Great Smoky Mountains National Park so special? Well for one, the park is home to some wild varieties that are not commonly found elsewhere.

The predominant species are the Catawba and Rosebay. What makes it so magical is the sheer number of these plants spread over vast rolling mountains. When they bloom, beautiful pink and white blankets of color awash as far as the eye can see. It can truly be a sight to behold.

When Rhododendrons Bloom In the Smokies

Catawba Rhododendrons are native to the eastern United States and grow mainly in the southern Appalachian Mountains, beginning in southern Virginia down through northern Alabama. When blooming, they have bright pinkish-purple flowers. They are one of the most popular blooms to see in the park. They are usually found only at elevations at or above 3,500 ft. A true “high mountain” bloomer. The peak blooming period begins in early June at the 3,500 ft elevation. The higher in elevation you go, the later the peak bloom time is. At 3,500 ft the peak is about June 5th – 15th, and above 5,000 ft the peak is about June 20th – 30th.

Where can I see the Catawba Rhododendrons?

Rosebay Rhododendrons are native to the Appalachians in eastern North America from Alabama up through Nova Scotia. When blooming they produce beautiful white flowers. The Rosebay Rhododendrons are the most common rhododendrons in the Smokies. The blooms appear first at the lower park elevations  in June, but can be seen at all elevations < 5,000 ft by July and August. The rosebay’s are one of the parks most common woody plants. They can often be found growing along streams and in shaded ravines, even roadsides.

Not every shrub will flower each year, but because there are so many in the park there will always be plenty of flowering Rosebay’s to enjoy. Occasionally the majority of the shrubs will all bloom during the same year, this is called a “super bloom” or a “big bloom”. It is unclear what causes these big bloom years or when they will happen. The cycle appears to be approximately every 2-4 years.

Where can I see the Rosebay Rhododendrons?

I have seen people report that if you want to drive by a nice mix of both Catawba and Rosebay’s, you can drive on Newfound Gap Road from the Sugarlands Visitors Center to Oconaluftee Visitors Center. You should pass by both species as the elevation changes, so you will be able to see both lovely pink and white flowers.

You may also like:  13 Plants That Keep Animals Out Of Gardens

Mountain Laurel is an evergreen shrub that is native to the eastern United States. It can be found from the south of Maine down to northern Florida, and as far west as Indiana and Louisiana. Its flowers are an interesting roundish cup shape. Bloom colors range from white to pink in the wild, although some cultivars of dark pink and even maroon have been grown. They are a fairly large shrub and can grow to their maximum potential, almost tree sized, in the Appalachians. They like to grow on rocky slopes and in mountainous forest areas. If you’re out walking with your dog, just make sure they don’t decide mountain laurel looks good to eat as it is toxic to many animals (people included!). Mountain Laurel blooms in the Smokies from May through early June. 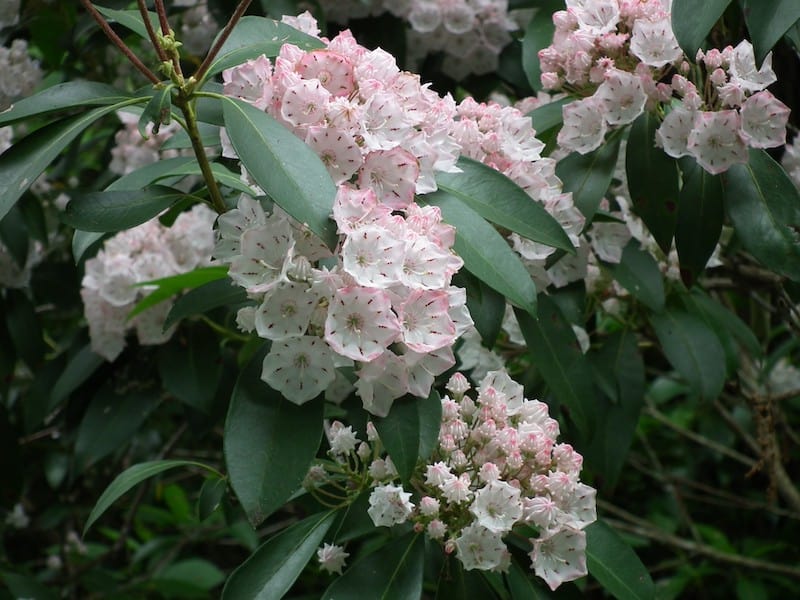 Where can I see Mountain Laurel?

The mostly highly reported spot for beautiful Mountain Laurel blooms is Spence Field. To get to Spence Field, hike the Anthony Creek trail to the end, then pick up the Bote Mountain Trail all the way to the top. Another great choice, as you can probably tell by the name, is the Laurel Falls Trail. People have also reported some nice viewing on the Rich Mountain Loop and the Roaring Fork Motor Trail.

Another member of the Rhododendron family that blooms brilliantly in the park is the Flame Azalea. Flame Azalea blooms can be found in many colors, mainly peach, yellow, orange and red. Found predominantly on grassy balds in the southern Appalachians. Blooming occurs in April and May at the low to mid elevations, and June to early July in the upper elevations.

Where can I see Flame Azaleas?

The summit of Gregory Bald is considered to have one of the finest displays of Flame Azaleas in the world. It takes a little effort to get there, but will be well worth the trek. The hike is more than 5.6 miles and the elevation climbs quite a bit. However this hike is still very popular during the peak blooming period. Historical records show that the peak bloom for these Flame Azaleas is between June 13th and June 24th.

The second most popular location to view the Flame Azaleas is to hike the Andrews Bald in late June. Roundtrip the hike is about 3.5 miles.