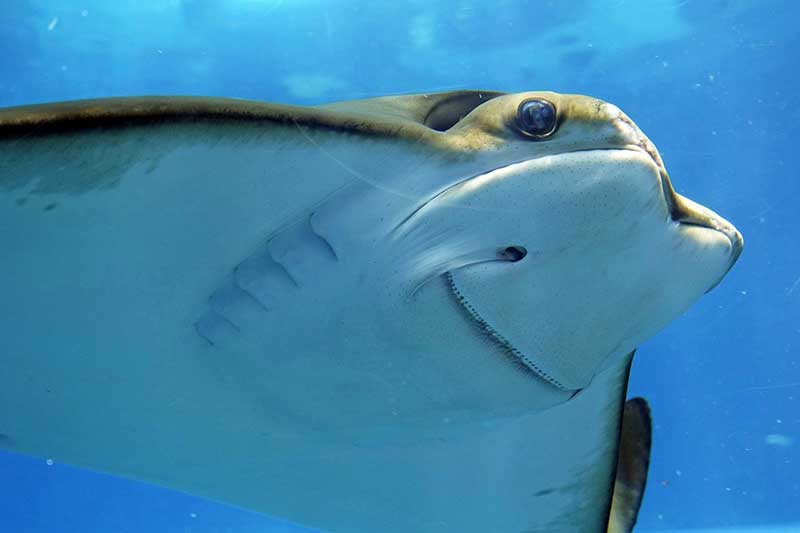 Stingrays may not look like fish with their flat and wide bodies, but they are! However don’t get them confused with Manta Rays, they are quite different. Found in both tropical and subtropical waters, these affectionately dubbed “pancakes of the sea” can usually be found hidden on the seafloor. Here are a few fun facts about stingrays and why they’re so interesting to so many.

1. There are 220 known species of stingrays!

The word “stingray” really applies to a wide variety of animals, but is a common term to refer to all 60 species in one way or another. They’re different from just plain rays due to the presence of their venomous stinger.

2. The largest species of stingray is the short-tail stingray

This amazing fish can measure nearly 6.5 feet in length and weigh up to 790 pounds!

It’s believed that stingrays and most sharks share a common ancestor and bother belong to the same group of cartilaginous fish. They both hunt using electromagnetic pores, and their bodies are made of the same cartilage.

4. They don’t have a bony skeleton

Stingrays have a body that’s made up of cartilage – the same kind that makes up human noses and ears. This allows for better flexibility in the water and allows for their “flapping” motion of swimming.

5. Their tails really do contain venom

As the name “stingray” implies, these rays are most well known for the spine, also called the stinger, that holds the stingray’s venom. This venom is mostly used to protect them from predators like sharks and is not used to hunt prey.

It’s important to note that they didn’t just jam the stinger in their patient’s mouth. A very diluted version of the venom was used as a local anesthetic, although the exact recipe these dentists used has been lost to history…at least for now.

7. Shuffle your feet to not get stung

A common tactic used by surfers and divers when in areas with a high concentration is to shuffle your feet in the sand every so often. These rays will feel the vibrations and get out of your way, preferring to run away than sting you.

8. They don’t use their eyes to hunt

Stingrays have notoriously bad eyesight, plus their eyes are on top of their bodies which makes it difficult to find fish that swim beneath them.

9. They do use electro-sensors to find prey

Another one of the more interesting facts about stingrays is that similar to sharks, stingrays have specialized electrical organs that are meant to sense the location and movement of their prey. These sensors are called ampullae of Lorenzini and are located around the stingray’s mouth.

10. Their mouth is on their body

Specifically, the part of the body that faces the sand. They use their electrical sensors surrounding the mouth to find clams, shrimps, and mussels on the sea floor and then use their powerful jaws to crush and eat them.

However, it’s common for them to group together in large schools and travel with one another.

12. They give birth every year

A female stingray can have between 2 to 6 babies each year!

Their biggest threat isn’t predators anymore though, it’s humans. Because so few people know all the facts about stingrays, fear is the main driver for hunting these mostly docile animals. That, plus ocean pollution and bleaching of coral reefs, have lead to a nearly 30% reduction in their natural environment.

One of the facts about stingrays that probably won’t surprise you is that they are good at hiding. A stingray’s coloration commonly reflects the seafloor’s shading. They’ll often bury themselves in the sand with only their eyes sticking out and only moving with the sway of the tide.

15. They’re still dangerous even when dead

The only time a stingray will use its venom is when it’s stepped on – or if it’s dead. It’s common for divers to accidentally step on a barb from a long-gone ray and for it to have the same effects as a live stinger.

16. There are freshwater stingrays too

Even though when you think of a stingray you’re probably thinking of those on the ocean floor, there are also species that are restricted to freshwater. These include the Niger stingray and other whiptail stingrays.

17. Its gills are on the underside

However, it still needs to breathe when submerged in the sand. That’s why stingrays have also evolved spiracles behind the eyes, which act as a secondary opening for the respiratory system and allows them to breathe when hunting in seafloor sediment.

18. Their “teeth” are modified scales

These teeth are still plenty capable of crushing the hard shells of the mollusks they prefer to eat. Like animals with true teeth, these scales still have an implanted root and a visible portion of the tooth, but they’re shed and replaced more often than bony teeth.

20. They have the longest mating period recorded in cartilage-based fish

Individuals are known to mate for seven months prior to when the females actually ovulate in March. This extended mating period makes these rays more sexually aggressive during this time. However, it’s believed this happens in order to weed out undesirable males who can’t last during the entire season, leaving only the most qualified males to mate.

Stingrays are generally born with the instinctual abilities to protect and feed themselves. In only a few select freshwater rays, the mother will care for the young until they’re approximately 1/3 her size before sending them off, but this is not the norm.

22. They store their venom within tissue cells

Most venomous animals create and store their venom inside of a gland. This helps to greatly reduce the energy cost of producing and storing more venom.

You may also like:  Why Do Fish Have Scales?

The venomous tissue within saltwater stingrays is only located within the grooves of their stinger, while freshwater tissue covers the surface of the entire blade. Because of the increased surface area and quantity, this venom is considered to be of higher toxicity.

Stingrays aren’t especially popular as food items, but they do get bounties placed on their heads from local shellfishermen. In a form similar to wolves and sheep, these farmers cultivate the mollusks for humans, and stingrays will come in and can decimate a mollusk population in days.

25. Their skin used to be used to make Japanese swords

Not the sword itself of course, but the rough skin was used as an underlayer for the leather wrap on the hilt of traditional swords. This kept the leather from slipping during use, but would be too rough as a grip itself.