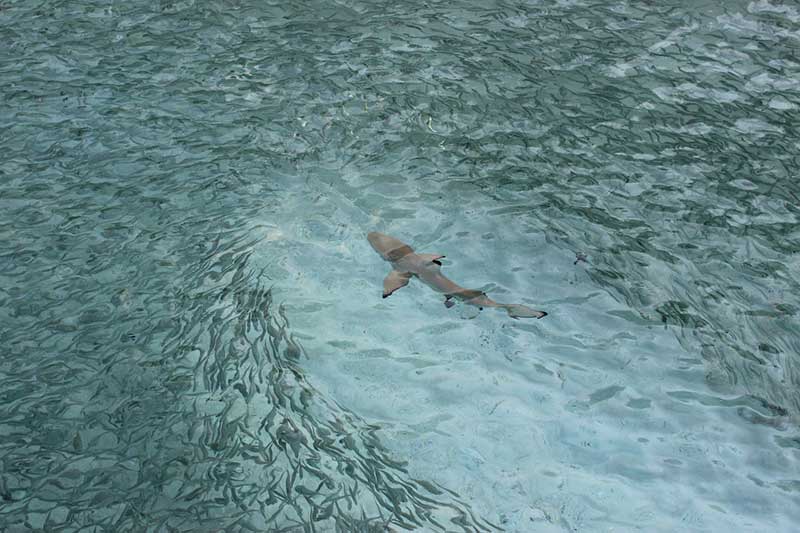 It’s no surprise that people are afraid of sharks given that there are countless books, movies and stories that depict sharks as bloodthirsty, human-eating monsters. If you fall into this category of people that are afraid of sharks, then it’s likely you’ve considered what to do if you encounter a shark.

One thing that’s important to note, that the only way to 100% guarantee that you will avoid encountering a shark, is to stay out of the water. As soon as you step into the ocean, you are entering shark habitat and they are entitled to be there.

What to do if you encounter a shark – 4 tips

If you find yourself in close proximity to a shark, it’s important to stay calm. Humans are not on the menu for sharks, but sometimes sharks can confuse humans for their prey like large fish or marine mammals. And if you begin to thrash around in a panic, then a shark may confuse you as a wounded prey item- which to them looks like an easy meal.

If you can, try to keep your eyes on the shark. Like any other hunter, sharks prefer the element of surprise. Many sharks may be curious and are swimming near you just to simply come and check you out. If you show that you are alert and aware, the curious shark may lose interest.

3. Be prepared to fight back

If a shark is dead set on you, there isn’t a whole lot you can do to stop it. But there are several weak spots you can target that may increase your chances of getting away. If the shark is getting too close for comfort or is charging, you should be ready to fight back as a last resort. So when it comes to what to do if you encounter a shark, one of the most important things you can do is fight for your life.

4. If you are bitten by a shark – target the weak spots

As mentioned earlier, there are a few places that are highly sensitive for sharks. Those places being the eyes, nose, and gills. If you find that a shark is charging at you with the intention to bite, then a blow to it’s eyes, nose or gills may cause it to change its course or release you if it has bitten you.

How to avoid a shark attack?

If you encounter a shark, there isn’t a whole lot you can do if the shark is determined to come after you. However there are several things you can do to avoid getting yourself into that situation in the first place. Preemptive measures against shark encounters are far more effective than a last ditch effort to fight off a shark.

Here are some more important tips on how to avoid shark attacks.

Why do sharks attack humans? 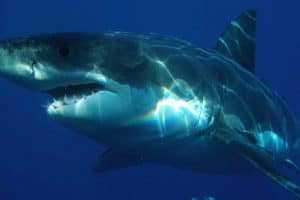 Despite their deadly reputation, shark attacks really are not common. In fact, you are more likely to be struck by lightning than attacked by a shark. But that doesn’t mean that shark attacks don’t happen. In almost every case, sharks attack humans almost entirely on accident.

The fact of the matter is, humans are not on the preferred list of prey for sharks. Sharks don’t actually want to eat humans, they would much prefer to chow down on a fish, seal or even a sea turtle before one of us. So, when a shark attacks somebody it almost definitely is just a very unfortunate mistake of sharks thinking a human is a prey item.

Signs of sharks in the water

The most obvious sign of a shark in the water is the sight of the shark’s dorsal fin, not to be confused with a dolphin dorsal fin. Sharks have a more straight or pointed dorsal fin while dolphin’s dorsal fins are curved.

Another thing to look out for are feeding frenzies. You may notice that there are many smaller fish jumping out of the water at the same time. This is most likely in response to a large predator nearby like a shark. If you see this, it’s best to stay out of the water.

How shallow can sharks swim?

While sharks tend to prefer deeper water, they are capable of swimming in very shallow water and close to shore. Even larger sharks like Bull sharks can swim in water that is only a few feet deep. Sharks typically come close to shore to feed on schooling fish or to chase down other prey. 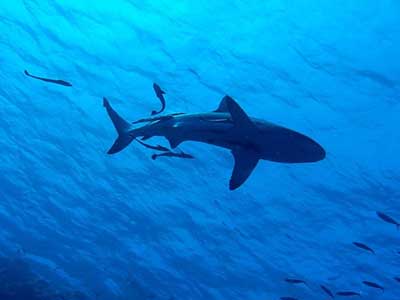 While sharks have the potential to be dangerous, shark attacks are very rare and in fact sharks do not want to attack us or eat us! There are luckily several measures you can take to be shark safe and to avoid any unwanted encounters with sharks. There are even a few things you can do if you do get too close.

Overall, due to the fact that shark attacks are so rare, there isn’t much to worry about. You shouldn’t let these miniscule odds of being attacked by a shark stop you from enjoying a day at the beach. It’s also important to remember the fact that when we go into the ocean, we are stepping out of our world and into a shark’s world.

As long as you are sensible and aware, you are unlikely to run into any trouble!