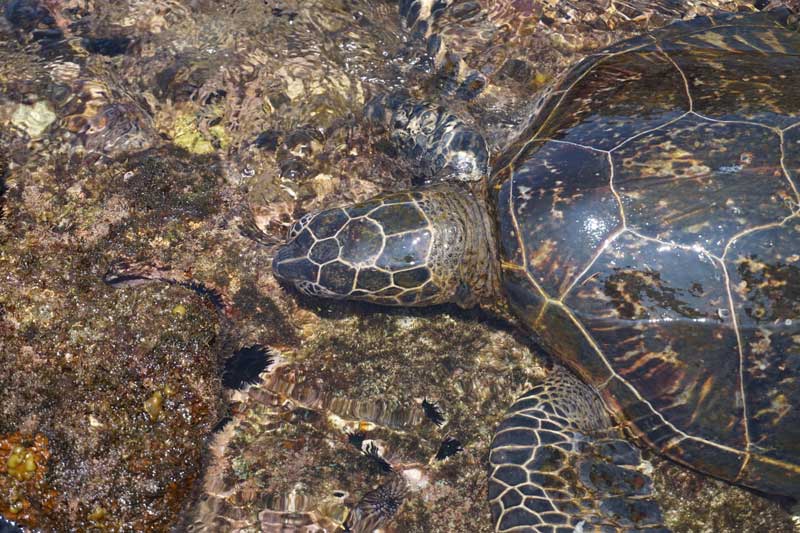 There are 7 species of sea turtles in the world. When it comes to sea turtles in Florida, you’ll find 5 of those species in the waters nearby. Those 5 species are the Loggerhead, Leatherback, Green Turtle, Hawksbill, and Kemp’s Ridley.

In this article we’ll touch on species by looking at some pictures, learning a few facts, as well as discuss the best times and places to spot one in the state of Florida.

The Loggerhead got its name because they have rather large heads and jaws. These carnivorous reptiles feed primarily on crustaceans, mollusks, fish, and other sea life. These large jaws allow them to easily open and crunch heavily protected shells such as conches.

Nesting season for Loggerheads is from April to September each year. The majority of nesting for Loggerheads in the United States is on the beaches of North Carolina and southwest Florida. There is also some nesting activities in the Gulf of Mexico in both Florida and Texas.

Loggerheads are considered threatened due to loss of nesting grounds and being hunted by humans. They are currently a protected species.

Fun fact about Loggerhead Sea Turtles: Leatherbacks can raise their own body temperature, letting them live as far North as Greenland.

This is one of the more elusive species of sea turtle. They spend the majority of their time traveling and diving in the open ocean and can dive to over 1,000 meters deep. Normal sea turtles wouldn’t be able to do this, as the pressure would crush their shell, but the Leatherback’s lack of a hard carapace allows them to withstand these depths.

When a Green Sea Turtle is born, they’re only 2 inches long! They’re named for the greenish hue of their skin and are adept swimmers. This hue comes from the green fat they store under their shell that gets is color from their primarily veggie diet. There are technically two subspecies – the Atlantic and Eastern Pacific Green Turtles, and the Atlantic species is the one that lays their eggs in Florida.

Green Sea Turtles feed on crabs, jellyfish, and other creatures when they’re younger. As they age into adults, they primarily eat sea grasses and algae.

The Green Turtle is the largest species of hard-shelled sea turtles. The two largest remaining nesting areas for this turtle are the Caribbean coast of Central America and the Great Barrier Reef in Australia.

The biggest threat to this animal is the degradation and loss of nesting and foraging habitats. Furthermore, it’s still legal to hunt the Green Turtle and harvest their eggs, leading to a push in the conservation community to further protect this classic animal.

The Hawksbill Sea Turtle is named for its “beak” of a mouth. This paired with a narrow head help it to reach into cracks and crevices of coral reefs to find their favorite food – poisonous sponges.

These sponges are poisonous to most other creatures on the reef, leading to very little competition for the Hawksbill. Furthermore, if a human eats this turtle they can get very ill and potentially die. That doesn’t stop humans from trying to harvest their highly coveted shell that sparked the name “tortoiseshell”.

Hawksbill Sea Turtles don’t nest in large groups, choosing rather to find a solitary nesting spot and climbing over rocks to find a secluded spot. It’s become rarer and rarer for them to choose to nest in Florida, although there are still small pockets that still hail from Miami.

Fun fact about Hawksbill Sea Turtles: One Hawksbill Turtle can consume over 1,000 sponges per year.

These turtles are especially integral to reef ecosystems. Those sponges, if kept unchecked, have the capability to suffocate coral and overgrow whole reefs. The Hawksbill keeps these populations low as well as providing openings for smaller fish to reach parts of the reef that would otherwise be inaccessible.

The Kemp’s Ridley Sea Turtle is the world’s most endangered sea turtle. Because of this, their nesting processions are extremely protected.

Females will completely take over portions of beaches and stay there until they can find a satisfying spot to lay their eggs. They’re found primarily in the Gulf of Mexico and are among the smallest sea turtles.

They prefer shallower waters where they can easily dive to the bottom to eat crabs and other shellfish. They’re also the most sensitive to human-made events such as oil spills. Unlike other sea turtles, the Kemp’s Ridley Sea Turtle is the only one who solely relies on the Gulf Waters as their breeding ground. Florida is now the leading breeder of these turtles in captivity in an effort to boost their numbers in the wild.

Fun Fact: These turtles change color as they grow up; they’ll start as a dark purple, but mature adults are more yellow-green or white.