Hawks are one of several types of birds of prey including falcons, owls, and eagles. Birds of prey are predatory birds that use their strong, hooked beaks and sharp talons to take down prey. The state of Florida is home to several of the species of hawks in North America. Whether you’re a bird enthusiast, resident to the state, or just simply curious, you may be wondering what types of hawks live in the state of Florida. In this article we’ll answer that very question and show you the 7 different hawks in Florida, as well as learn a little bit about each species!

7 species of hawks in Florida 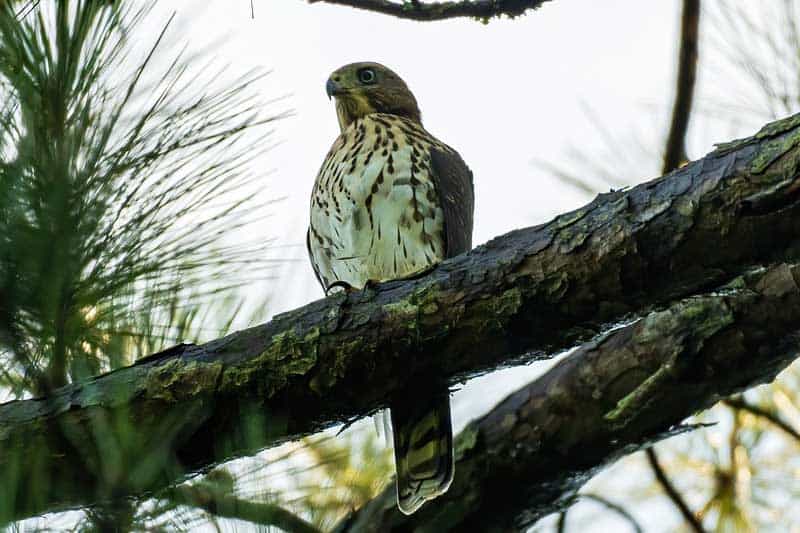 They are also notorious for stalking feeders and feed almost exclusively on other birds. Their preferred habitat is forests and wooded areas but will also nest in suburban wooded areas and backyards too. Learn more about the Cooper’s hawk here. 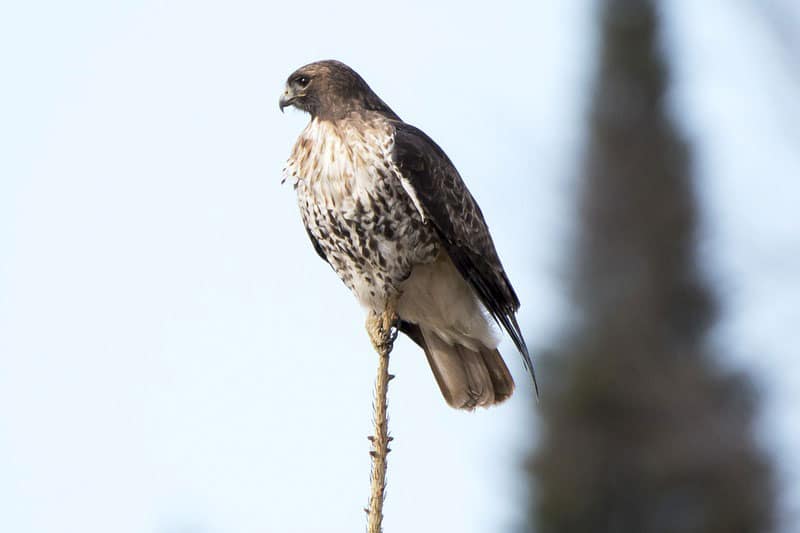 Red-tailed Hawks are the most common hawks around with almost 2 million nesting hawks in North America. This number accounts for about 90% of the global Red-tailed Hawk population. These large hawks live in Florida and most of North America all year long.

Red-tailed Hawks are most active during the day or early morning and are commonly seen soaring above looking for prey with their amazing vision or perched along the roadside on telephone poles. Learn more about the Red-tailed Hawk here. 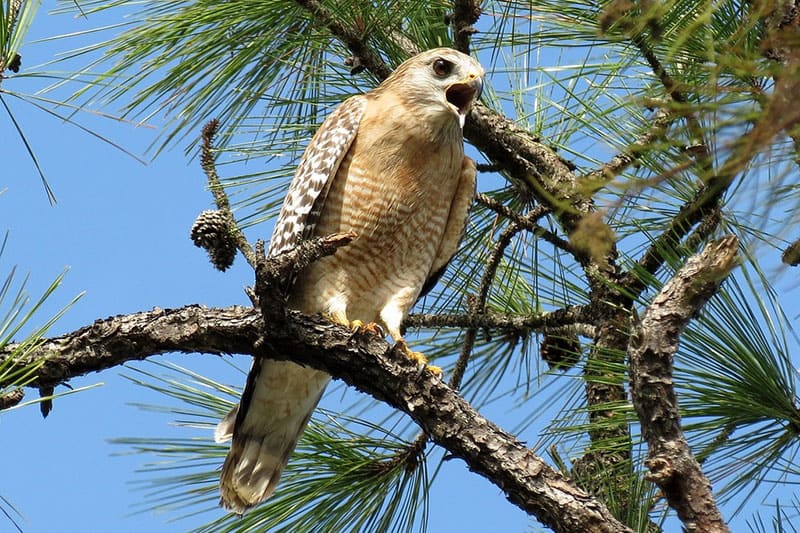 The Red-shouldered hawk is a year-round resident to all of Florida, and most of the eastern half of the U.S. They eat mostly small mammals, other birds, reptiles, and amphibians. They are known for living and nesting in wooded areas and forests. Red-shouldered Hawks will commonly re-use the same nest year after year.

The population of Red-shouldered hawks has increased over the last 50 years in their range. The biggest threat to this species is the clearing of wooded areas where they nest and breed. Learn more about the Red-shouldered hawk here.

The Northern Harrier is the only harrier variety of hawks indigenous to North America. Its breeding grounds range as far north as Canada, but it winters in more southern climates, including Florida. They like living and hunting in fields and marshes.

Northern Harriers are the most owl-like hawks in Florida and North America. They rely heavily on their acute hearing as well as their excellent vision to hunt for prey.

The Sharp-shinned Hawk is the smallest of all hawks in Florida as well as Canada and the United States. These hawks are very widespread and can be found all over the place in North America. However they do have a non-breeding range in SC and will migrate north to warmer climates in the winter. You can see their range map here.

The Broad-winged Hawk has a winter range only in the southern tip of Florida. Strangely enough, their breeding range begins in the panhandle, so some birds have a short flight each year. Look for Broad-winged hawks in the Spring and Summer months in the eastern half of the United States. They aren’t found in the western U.S. aside from an occasional wandering migrant.

Broad-winged Hawks migrate each year by the thousands, these large flocks are called “kettles”. Broad-winged Hawks have one brood each year with 1-5 eggs.The female is in charge of constructing the nest, with help from the male. They will fiercely protect their nesting site and build their nests with at least a half-mile of separation from other birds of prey. Their diet is consistent with that of most other birds of prey.

This tropical hawk is only found in the state of Florida. If you live in or visit southern Florida you may be lucky enough to spot a nesting pair, in the Central Florida they are only winter residents. Look for these birds in open fields next to woodland, preferably close to a water source.

You may also like:  15 Common Butterflies in Wisconsin (Pictures)

These small hawks soar high above other birds so that they may swoop down and take them as prey. Unlike most other types of hawks, short-tailed hawks do prefer other birds as their primary food. Short-tailed hawks come in both a light and dark morph, both are uncommon in the state of Florida.