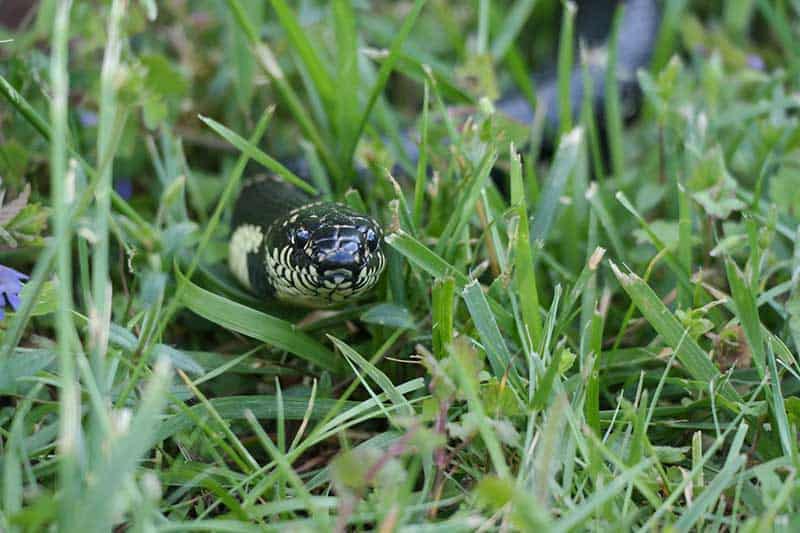 Florida is home to many different species of snakes, some of which are venomous. Unless you consider snake identification one of your stronger skills, it can be difficult to tell certain snakes apart, especially snakes that share similar colors and patterns! Florida is home to a handful of snakes that are black or mostly black, making distinguishing one from another a bit difficult. In this list, we’ll introduce 11 species of black snakes in Florida.

It’s important to note that some individual snakes may vary in their coloration due to different factors. However, if you see a black snake in Florida, chances are it is one of the snakes found on this list.

Scientific name: Drymarchon couperi
Length: 6.5 – 8.5 ft
Distribution in Florida: Throughout most of peninsular Florida and as far south as Key Largo
Habitat: Hardwood forests, pine flatwoods, prairies and around ponds

The Eastern Indigo snake is the longest snake in North America. It is a stunning snake with sleek black scales. Certain individuals may also have patches of red on their chin. Eastern Indigo snakes are nonvenomous and have a fairly mild temperament. They are listed as a threatened species by the state of Florida and at the national level by the U.S. Fish and Wildlife Service.

The Black Racer is one of the most common snakes you may encounter in Florida. It is a habitat generalist and is often found in urban/suburban areas. They are appropriately named Racers as they move incredibly quick! Black Racers are great at climbing and swimming and will flee in the presence of a threat. They are nonvenomous but have been known to strike in order to defend themselves.

Patterns and colors of Eastern Hognoses may vary, but some individuals are nearly all black. Hognose snakes are named after their slightly upturned or flat snout that resembles a pig snout. The Eastern Hognose will display death-feigning behavior when threatened and will roll onto its back and prop its mouth open to appear dead.

You may also like:  How To Attract Tree Frogs To Your Yard (7 Tips)

Ringnecks are very small black snakes marked with a single ring on their neck (hence the name), on their ventral side (belly) they are bright yellow, red or orange. When stressed or threatened, Ringnecks will lift their tail up to show off its brightly colored belly. Ringnecks are typically found under leaf-litter or logs and they also burrow.

Scientific name: Indotyphlops braminus
Length: 2.5 – 6.5 in
Distribution in Florida: Found all throughout Florida, including the Florida Keys
Habitat: Urban and agricultural areas

The Brahminy Blind Snake is not native to Florida, but is actually from Southeast Asia. However, they are not nearly as detrimental to native Florida ecosystems as other invasive reptiles in Florida. At first glance, many people mistake Brahminy Blind Snakes for earth worms due to their small size and similar appearance.

In Florida there are two subspecies of Black Swamp Snakes. As suggested by their common name, these snakes are aquatic and are not typically found away from water bodies. These snakes are actually live bearing snakes and will give birth to 2-11 babies during the summer.

The Eastern Coachwhip varies in color, but some individuals will be mostly black with the tail fading into a light brown color. Coachwhips are incredibly quick and are also amazing climbers. Most Coachwhips will flee immediately in the face of a threat, but if they can’t then they will quickly vibrate their tail against the ground to make a buzzing sound.

Scientific name: Farancia abacura
Length: 40 in
Distribution in Florida: Found all throughout Florida except for the Florida Keys
Habitat: Freshwater habitats such as swamps, marshes, along drainage ditches, rivers and lakes

The Eastern Mud Snake is a highly recognizable snake due to its coloration. The dorsal portion of the snake is mostly black with red bands emerging from the ventral (belly) side of the snake. Eastern Mud Snakes have reputation of being incredibly docile and rarely bite when handled. Instead, they may press the pointed tip of their tail into the hand of whoever has picked it up.

Scientific name: Regina rigida
Length: 14 – 23 in
Distribution in Florida: Found in central peninsular Florida and in parts of the panhandle
Habitat: Aquatic habitat like sloughs, swamps, creeks and streams

Glossy Crayfish snakes are relatively uncommon. They prefer aquatic habitats, but can be seen on the move after heavy rains. They vary in color but are typically very dark brown/olive colored. As suggested by the name, these snakes eat crayfish but will also feed on other aquatic organisms like fish, frogs and salamanders.

You may also like:  Owls In Vermont (9 Species With Pictures)

Scientific name: Virginia striatula
Length: 7 – 10 in
Distribution in Florida: Found only in the western half of the panhandle and in northern peninsular Florida
Habitat: Pine flatwoods

The Rough Earth Snake ranges from shades of black to dark brown or even grey. They are not very common as they are fossorial, meaning they spend most of their time underground. They have a pointed snout that helps them to burrow through soil. Their diet consists of mostly earth worms.