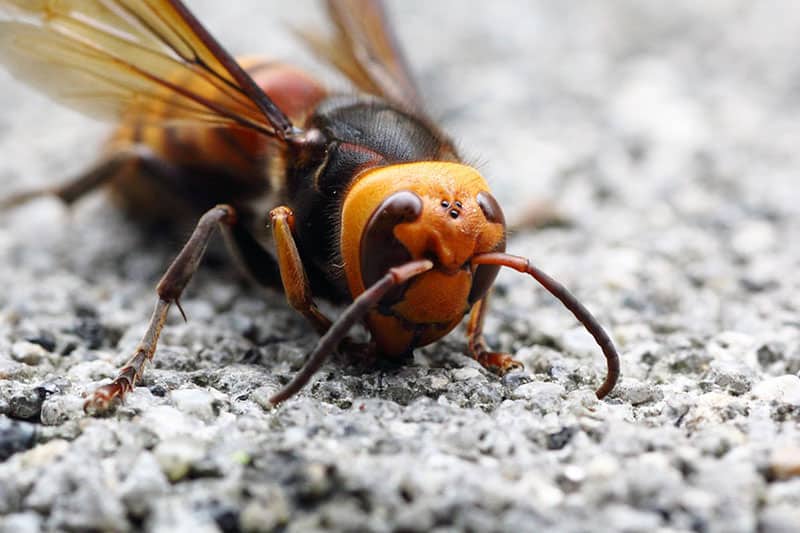 You may have been hearing a lot of “buzz” (pun intended) about the so-called murder hornets that have somehow made it into the United States recently. In this article we’ll discuss what is known about them as well as what you should do if you spot one. First though, what is a murder hornet?

What is a murder hornet?

Asian Giant Hornets, now known as “Murder Hornets” thanks to a piece by the New York Times, are the largest species of hornets in the world at over 2 inches in length.

Why are they called murder hornets?

They got the name murder hornet because they are very aggressive in the wild and known to attack other social insects such as honey bees. Keep in mind that the name “murder hornet” is not their common or scientific name and was given to them by the media. The name has caught on though and has done its job of further scaring people.

A single one of these hornets will kill and eat as many as 40 honeybees in single minute by ripping off their heads and feeding on their torsos. They can rip through colonies of thousands of bees in mere hours. This is the real reason why the name does fit to an extent, not because they murder people.

Can murder hornets kill you?

Unless you are allergic to stings, or are stung multiple times by a swarm, a sting from an Asian Giant Hornet will likely not kill you. But it will cause extreme pain.

According to scientists the sting from one wouldn’t be much more painful than a common hornet here in the United States. Even so, they kill an estimated 50 people per year in Japan where they are hunted and eaten. Compare that to the United States where an average of 62 people die each year from hornet, wasp or bee stings.

So it’s important to note that they aren’t called murder hornets because they go on murderous rampages killing humans, but rather because of the effect they have on honeybee populations. Honeybees are vital to the environment and a crucial part of the food-chain.

Where did murder hornets come from?

As the name Asian Giant Hornet suggests, they are native to Asia and can be found in Southeast Asia, Japan, China, and Taiwan. One of these countries is likely where they originated from in regards to murder hornets in the United States.

The Asian giant hornet’s life cycle begins in April. This is when queens emerge from hibernation and feed on plant sap and fruit while looking for an underground den to build its nest. Once they have built the nest they will begin to grow a colony and send out the workers to find food, which largely consists of other insects such as honeybees.

Their preferred habitat is low mountains, to avoid high altitude climates, as well as forests. They make their nests by digging or occupying pre-existing tunnels formed by small rodents or other animals.

You may also like:  11 Types of Butterflies in California (With Pictures)

As mentioned above, “murder hornets” are native to Southeast Asia, Japan, China, and Taiwan. They have however moved into other countries and become a major concern in several areas across the globe such as Europe, including the UK.

Asian Giant Hornets feed primarily on other insects, often times insects that are much larger than they are. They also feed on sugary saps and fruits at certain times of the year when first establishing a colony.

They are known for taking out an entire colony of honeybees and feeding on them as well, which is the main reason these hornets are so dangerous to the environment.

Murder hornets in the U.S.

Asian Giant Hornets were discovered in the Pacific Northwest region of the U.S. in late 2019. More specifically near Blaine in Whatcom County of Washington State. A private beekeeper initially made the discovery when an otherwise healthy honeybee hive had been totally eradicated by the hornets. I’m seeing mixed reports of whether there was an actual sighting of the hornets, or only the carnage they left behind that is well known among beekeepers and entomologists.

There haven’t been any further reports since.

How did they get here?

It’s unclear exactly how they made it to the U.S. but it’s believed there are several theories. It’s possible that some made it over in a shipping container from one of their native countries and were accidentally released when they arrived here. It’s almost unthinkable that someone would have purposely released them into the wild here.

What to do if you see one

The chances that you actually come across one are pretty slim, however if you do you should not attempt to kill it or capture it yourself. In fact you should go the other direction in a hurry.

As of spring 2020 the hornets have only been spotted in the state of Washington. Should you spot one in another state, you should contact your invasive species management office, or Department of Agriculture for your state.

At the time of writing this article the Washington State Department of Agriculture website is down, but the link is below for when it comes back up.

1) Please only send reports of Asian giant hornet to WSDA if you live in Washington State. Otherwise, please send them to your state apiarist, department of agriculture, extension office, or invasive species council.

3) It isn’t called the “murder hornet” in the United States. They are most commonly known as Asian giant hornets. If you are looking for good information, search for Asian giant hornets or – even better – use the Latin name, Vespa mandarinia.

As always, you can learn more at agr.wa.gov/hornets.