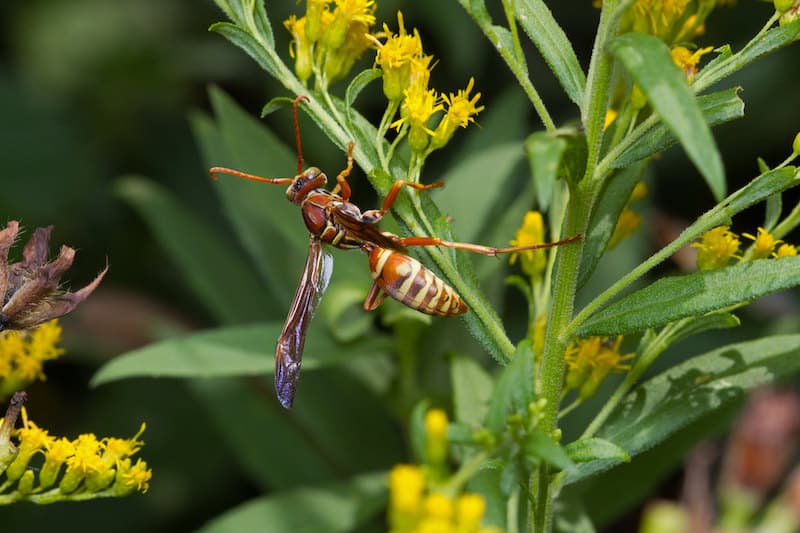 Texas is the second largest state in the U.S., covering over 261,000 square miles. The lone star state is made up of prairies, coastal areas, deserts, and forests. It is also one of the top agricultural producers in the United States. With all this diversity, it makes sense that you would be able to find many species insects in these different habitats. In this article we will specifically look at 10 types of hornets, bees, and wasps in Texas.

Hornets, Bees, and Wasps in Texas

It is estimated that there are 800 species of bees, 11 species of wasps, and 1 honorary hornet species in Texas. We certainly can’t list them all here, but we can look at ten of the more common and interesting species. Let’s dive in!

There are several species of leafcutter bees found throughout Texas. These bees are unique in the way they build their nests.

Leafcutter bees are solitary insects. After a female has mated she will choose a location for her nest and then dig a burrow in the ground. She will line her burrow with pieces of leaves that she has cut from plants and then deposit pollen and a single egg in each chamber of the nest.

Each burrow usually has a few egg chambers and each female will create several burrows in her lifetime.

Like their name implies, mason bees build their nests with collected mud. They use pre-made holes often in trees or reeds and create egg chambers with mud. You can even purchase mason bee houses to hang in your garden. They are usually made of a collection of wooden tubes stuck together.

Similar to leafcutter bees, they will then lay 1 egg per chamber and leave nectar and pollen for the baby bees. Interestingly, the eggs laid toward the back of the chamber are always female and the ones at the front are male.

Mason bees are often found in orchards throughout Texas as they are better adapted to pollinating citrus flowers than European honeybees. They have the ability to sting, but are fairly docile and will rarely sting humans.

There are a few different species of miner bees that have wide ranges all across Texas and North America.

These bees are solitary bees that will build nests in soil such as clay. The females will often nest near each other, and create tunnels that resemble chimneys.

The female mining bee uses a saliva mixture to waterproof the inside of her tunnel and create small chambers for her eggs. Each egg is nestled into a bed of pollen where the egg will hatch and the baby will grow.

These bees are important pollinators that are thought to visit some rare flowers as well as crops. They are opportunistic feeders and enjoy almost any flower they come across.

Squash bees are super interesting in that they will only pollinate the flowers of squash species. These bees can be found anywhere squash can grow from Canada down to South America.

The male squash bee will hang out near squash flowers in the morning waiting for the female bees to stop by. Once he mates he will fall asleep inside the flower.

After breeding, females will build ground nests similar to the leafcutter bees, but without the leaves. If you have zucchini, gourds, or pumpkins growing in your yard, keep an eye out for these adorable pollinators.

European honeybees are in the bumble bee family, and are not native to Texas but are found throughout the state. These bees have been captively bred in the United States for generations.

Beekeepers often maintain hives that they rent to farmers. These hives will pollinate the farmer’s crops while producing honey for their keepers to harvest and sell.

While these bees are not a threat to native species, it would be nice to see more keepers attempt to cultivate hives of natives as well.

The bald-faced hornet is the only known hornet found in Texas and, ironically, it isn’t a hornet at all but a species of yellow jacket.

These hornets are named for the lack of yellow on their bodies and their white facial markings make their faces appear bald.

The sting of these insects is incredibly painful, and since they live in large nests of 200-400 individuals, it’s unlikely you will just receive one if they perceive you as a threat.

Mexican honey wasps range from southern Texas to Mexico. They are a social species that build paper-like nests in trees and bushes.

Unlike most wasps, they are able to make and store their own honey, which is considered a delicacy in some parts of Mexico. Living in large colonies of up to 18,000, Mexican honey wasps are non-aggressive but will defend their nest if it is threatened.

These wasps are considered to be beneficial as they are pollinators and will eat certain harmful insects.

Found throughout the state of Texas, mud daubers are a solitary wasp species. Females will build small nests from chewed wood and saliva.

They will then catch a spider, use their stinger to paralyze it, and seal it inside a chamber with one of their eggs. When the baby mud daubers hatch they will feed on the spider until they are ready to emerge.

Mud daubers are unlikely to sting or hurt humans, so unless their nest is somewhere inconvenient, it is safe to leave them.

The Texas paper wasp is found throughout the state. These small wasps are very social and live in groups of up to 30.

Each group is founded by a queen female who will fly to a suitable location and form a nest. The first babies to emerge from this nest will be workers and will take over the building and food gathering duties for the reproducing female.

You may also like:  Wild Animals in Texas (Examples & Pictures)

The main female will then focus on laying eggs, which can number upwards of 200. Toward the end of the season, the females will lay eggs that contain more reproducing females and males.

After they hatch, the males and females will mate, and then the females will fly off to form their own new nests.

The reproduction habits of yellow jackets are very similar to those of paper wasps, with one female founding a nest that lasts for a single season.

One major difference between the two is that yellow jacket nests can contain up to 20,000 individuals in them, which is a lot of very painful stings if they are disturbed.

Also, unlike paper wasps, yellow jackets feed primarily on other insects. While they do collect some nectar, it is a very small amount.