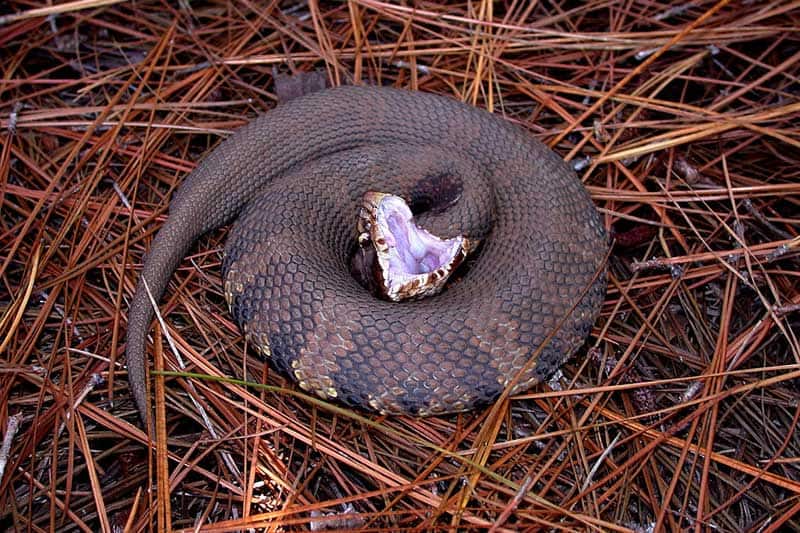 Cottonmouths are extremely venomous (more on that later), and their scientific name is Agkistrodon piscivorus. They are very similar to copperheads, but are primarily semiaquatic in nature (meaning they love to swim in water).

Cottonmouths are a family of pit vipers, and they are able to use their heat sensors (which are conveniently located in between their eyes like a nose) to hunt and even strike their prey with precision accuracy despite their poor eyesight.

Water Moccasins and cottonmouths share one common thing: they’re the same snake. Although water moccasins are the same however, there are more than one type. You have the typical cottonmouth, which is more dedicated towards the southern United States. Then you have other cottonmouth snakes such as the Northern Cottonmouth (which also resides in the same area).

Why is a Water Moccasin Called a Cottonmouth?

While they’re not an extremely offensive snake, cottonmouths are known to strike and bite humans who encounter them almost as much as rattlesnakes in a manner of self-defense.

Water moccasins go by a lot of different names, depending on where you’re located at. One thing remains true though – they, just like other snakes, have distinct markings that help you identify them much easier. Cottonmouths are commonly confused with copperheads because they share similar color patterns, although the markings are quite different.

Here are some identifying features of cottonmouths:

Why People Call Other Snakes Cottonmouths or Water Moccasins

As mentioned earlier, water moccasins are often mistaken for other snakes. Often those that have similar color patterns. States like Arkansas often confuse copperheads for cottonmouths. Other snakes are not true cottonmouths, because they lack the interior flesh of their mouths that give cottonmouths their name.

You may also like:  Why Do Frogs Croak at Night? (Answered)

Where Do Cottonmouths Live?

Cottonmouths are primarily found in southern areas of the United States. However, they are very diverse and have a larger range than some other species of venomous vipers.

Depending on the habitat and climate, water moccasins can live in different areas. In the Ozark region of Missouri, for example, cottonmouths live in the rocky areas near the water. In the other areas of the central and southern states, they are more apt to be seen in swamplands, such as in Louisiana.

A cottonmouth’s habitat is usually near a body of water in almost every case (or sometimes inside of them in the rock bed areas). The majority of locations are often rich with vegetation and swampy areas near riverbeds, like the Mississippi River.

They can even be found as far south as the Everglades (they apparently have no problem sharing a home with the crocs and alligators).

The location range for these snakes is rather wide, stretching almost half of the continent-wide, from Florida, all the way to the southern parts of Missouri, and as far north as Northeastern Virginia, at approximately (around 37-degrees north, and 77 degrees west).

While other snakes are commonly placed in numerous areas (such as some species of rattlesnakes), cottonmouths have one of the widest ranges in the entire country as far as venomous species goes.

How Venomous is a Cottonmouth?

Cottonmouths are a highly venomous species. Their bite can often be a very dangerous one, even though they are rarely known to bite humans. Their venom acts by breaking down blood cells, and their bite contains an anticoagulant (to keep their victim’s blood from clotting).

Of course, this means that while the bite can be not only severely painful and potentially fatal, it’s not as common for people to die from a bite that a cottonmouth delivers. Luckily, one can quickly go to a hospital and get an anti-venom serum injection.

In some cases, people who’ve been bitten suffer from permanent muscle damage though.

How to Avoid Being Bitten if You See a Cottonmouth

If you see a cottonmouth your first instinct may be to take a picture. You should never approach a venomous snake or worse, attempt to pick one up. Many snakes don’t always pose in a defensive posture and can strike at any time without warning.

The best way to avoid being bitten if you see one is to just leave the snake alone. You may also want to avoid areas near bodies of water where visibility is poor (such as under rocks, covered with heavy foliage areas, etc.)

What Do I Do if I’ve Been Bitten by a Water Moccasin?

If you’re ever bitten by a cottonmouth (water moccasin), it’s important that you go immediately to a local hospital near you and get medical treatment right away. As we said, you can get an anti-venom to help counteract the bite, even though it may not permanently repair any damage caused by the snake’s bite itself.

So, there you have it! A cottonmouth (also known as the common water moccasin) is one and the same. What’s important is that you follow this guide to learn about how to avoid and spot one, which we hope you’ll never have to do.

You may also like:  Water Snakes in Missouri (8 Species With Pictures)

Nevertheless, if you take all the precautionary measures and avoid these snakes at all costs you may still eventually see one. Luckily for you, there’s a slim chance you’ll ever be bitten by one if you are careful.