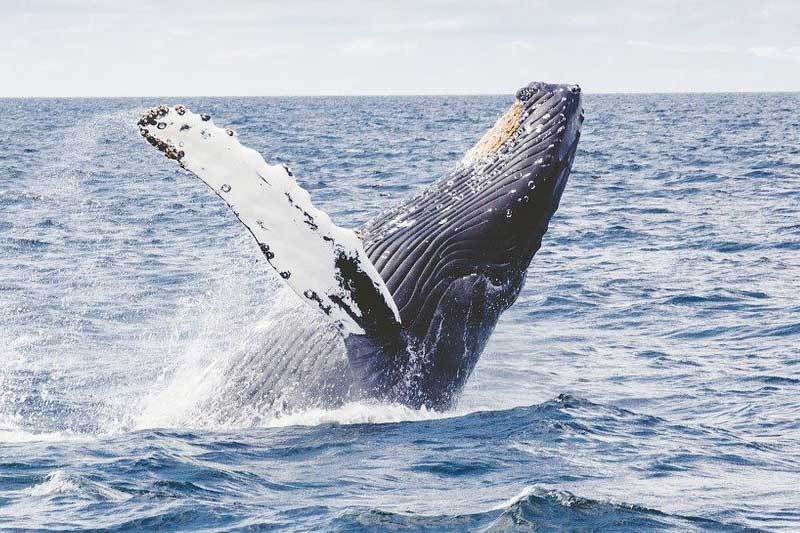 One of Maine’s most spectacular and memorable attractions is whale watching. It’s an absolute must see for any visitors during the warmer spring and summer months. There are many different species of whales in Maine, and they all migrate there to feed, raise their young, and enjoy the warmer waters just like us.

Maine’s coastal region has a long reputation as a fishery, and that’s the main draw for these whales. In fact, many humpbacks will return to the same area year after year for these abundant fish, making them almost local celebrities complete with names and fan clubs.

4 most common whales in Maine

The most common whales you can see off the coast of Maine are the humpback, pilot, minke, and the huge finback. On the rarer side, dedicated watchers may spot orcas, right whales, and sperm whales traveling through the Gulf of Maine.

The following species are the most common and the most likely for you to encounter on a whale watching trip. You can see them from either the coast or from going further out to sea.

Scientific name: Megaptera novaeangliae
Length: 48 to 62.5 feet
Weight: 25 to 40 tons
Lifespan: 30 to 40 years
Status: Gulf of Maine humpbacks were removed from the US Endangered Species List in 2016, but continue to be classified as endangered under the US Marine Mammal Protection Act
Population: Between 120,000 to 150,000

Humpback whales are found in every ocean in the world. Their Latin name means the “big wing of New England”, which is referring to their gigantic fins that can grow up to 16 feet long as well as their appearances off the coast of Maine. They get the name “humpback” from the small hump in front of their dorsal fin on their back.

These whales are incredibly social animals, traveling in pods of 10 or more. It’s important for them to communicate with one another, and they do so through moans, howls, cries, and other complex sounds that can continue for hours.

A humpback’s “singing” can travel for more than 10,000 miles in some levels of the ocean, while calves have also been known to “whisper” to their mothers. Mothers and their young have an extraordinarily strong bond and swim close to one another with their flippers touching one another as a sign of affection.

The females will nurse their calves for almost a year, and those calves won’t stop growing until they’re 10 years old.

The humpback whale feeds on krill, plankton, and small fish off the coast of Maine for the warmer summer months before migrating into even warmer waters closer to the Equator.

This whale is an incredibly powerful swimmer with a massively powerful tail fin called a fluke. They’re probably most well known for their ability to use it to propel themselves out of the water in a maneuver called breaching. We aren’t entirely sure the purpose of this. Some people claim that it’s to clean their skin, while others say it’s just for fun.

Either way, it’s a majestic sight to see for any whale watcher no matter how long they’ve been watching. A breaching behavior unique to the humpback is something called a penducle throw, where they can raise their entire rear torso out of the water, twist, and then slam their lower half down against the surface of the water.

You may also like:  The 7 Species of Hawks in Florida (Pictures)

These whales are the easiest to identify when whale watching. Just look for the large grey shape under the water, and more than likely you’ll be rewarded with a spectacular sight of the creature breaching and a memorable moment from your trip.

Scientific name: Globicephala melas (Originally called Globicephala melaena but was changed in 1986)
Length: Up to 23 feet
Weight: Up to 4 tons
Lifespan: Around 45 years
Status: Not endangered
Population: Estimated around 150,000 individuals

The pilot whale is the second largest oceanic dolphin, only beat out by the killer whale. They’re called a “pilot whale” because originally the pods they travel in were thought to be “piloted” by a leader, although now we aren’t entirely sure about this.

These whales, like all on this list, come to Maine to feed. They go for bigger fish than the humpback, preferring Atlantic cod, mackerel, herring, hake, and spiny dogfish. They’re considered to be deep divers, with their dives lasting for more than 10 minutes. Unlike most deep divers that attempt to conserve oxygen by moving slowly, pilot whales are capable of sprinting even at depths of 600 meters.

Of all whales, pilot whales are the most commonly stranded, which is where the whales inadvertently beach themselves. Because of their strong social bonds, entire groups of whales can end up getting stranded, and scientists still aren’t completely sure why.

It may be that they use magnetic fields for navigation and anomalies are confusing their internal compass, but the most likely reason is a prominent member of the group accidentally ran ashore and the others simply followed. However, for whale watchers, this incredible social structure means that when you see one you’re more than likely to see at least two or three more.

These whales can be most easily identified when spyhopping, which is where they poke their head out of the water. They have a large, almost bulging head and while their main color will be a dark grey, brown, or black, they have a light, anchor-shaped patch under the chin. They also have a lighter “saddle patch” behind the dorsal fin. They are incredibly friendly and approachable, and can be seen both in the open ocean and along the coasts.

Scientific name: Balaenoptera acutorostrata
Length: 15 to 22 feet
Weight: Up to 6 tons
Lifespan: Around 30 to 50 years, but the oldest documented has been 60 years old
Status: Not at Risk (tentative)
Population: Estimated 515,000 individuals, but because of their shy and elusive nature this number could be far higher

The Minke whale is the most abundant whale species along Jeffrey’s Ledge, one of the largest feeding areas in the Atlantic along the coast of Maine. In the waters of New England, Minke whales are fully protected from any hunting or commercial use. These whales are small (by whale standards) and are difficult to observe in the open ocean. They’re very fast and shy, and the best time to see these elusive animals is close to the coast during choppy waters.

Communication is most likely the main driver for their surfacing, hence why turbulent seas encourage more breaching. These whales will use the sound of their body crashing into the surface as a kind of check in, and the sound can travel tremendous distances so the pod stays in contact.

You may also like:  12 Common Butterflies in Texas (With Pictures)

Very little is known about this elusive species, which leads to a lot of unknowns about them, but if you’re lucky enough to see one you’ll immediately notice the two white bands across their flippers. These are colloquially called “Minke mittens” and are their most distinctive feature other than their smaller size and sleek speed. It’s considered good luck to get to see one of these smaller whales and can make any trip especially memorable.

Scientific name: Balaenoptera physalus
Length: An average of 85 feet
Weight: Varies by location, but those off the coast of Maine are around 60 tons
Lifespan: 90 years
Status: Vulnerable/Near Threatened
Population: Ranges from less than 100,000 to around 119,000

The huge finback is also called the fin whale or common rorqual, formerly called the razorback whale. It’s the second largest species on Earth, following the blue whale. Fans of this whale call it the “greyhound of the sea” for its slender body that can surpass the speed of the fastest ocean steamship.

Like the humpback, the pilot whale is found in all major oceans, although it tends to avoid waters too close to ice packs at the poles. Due to its size, this whale prefers to stay in deeper waters and the best bet to see this gentle giant is to take one of the many whale watching cruises in Maine. Although there have been cases of sightings as close as a half mile offshore.

Unlike the majority of whales that come to Maine in the Spring and Summer in time for the start of the fish breeding season, the huge finback prefers the colder waters of late summer and the fall and can be seen as late as November.

The fin whale is dark to light gray on their back with a white underbelly. They also have a distinctive contrast of colors on their head, with the left side of the head a dark gray while the right side exhibits a complex pattern of dark and light and a “right mandible patch” that extends from the upper jaw to just behind the blowholes.

This whale is a filter-feeder and prefers small schooling fish, squid, and krill. Even though they’re a relatively abundant population, there are no known “fingerprint” markings available on the fin whale and so they’re one of the least understood whales in the world. We don’t even know where they go to breed and give birth, similar to how we just recently learned humpbacks spawn in the Caribbean waters.

When trying to identify the type of whale from a distance, the fin whale is often mistook for the humpback. Thankfully, the fin whale has an especially distinct “spout” when it surfaces to breathe. A humpback’s is usually low and bushy, while the fin whale can have it go up almost 20 feet straight up.

Just make sure to keep in mind that wind can distort the shape, so the best bet for certain identification is to hope this friendly whale comes close enough to see the mandible patch and the sheer size of it.

Where to spot whales in Maine

The area with the greatest abundance of whales is Jeffrey’s Ledge, which is actually an underground plateau that lies 150 feet beneath the surface of the water. It’s approximately 20 miles long and 4 miles wide. It’s easily accessible from shore and is the usual destination for any whale watching boats as the whales are most noticeable when taking a large breath in preparation of a deep dive.

There are also many local land-watching hotspots, and it varies from town to town. Some people simply walk the cliffside trails armed with binoculars and a keen eye and watch for the distinctive spouts. Some people claim that this is a more authentic experience as you don’t have a guide to point them out to everyone, while others prefer the structure of a narrated trip.