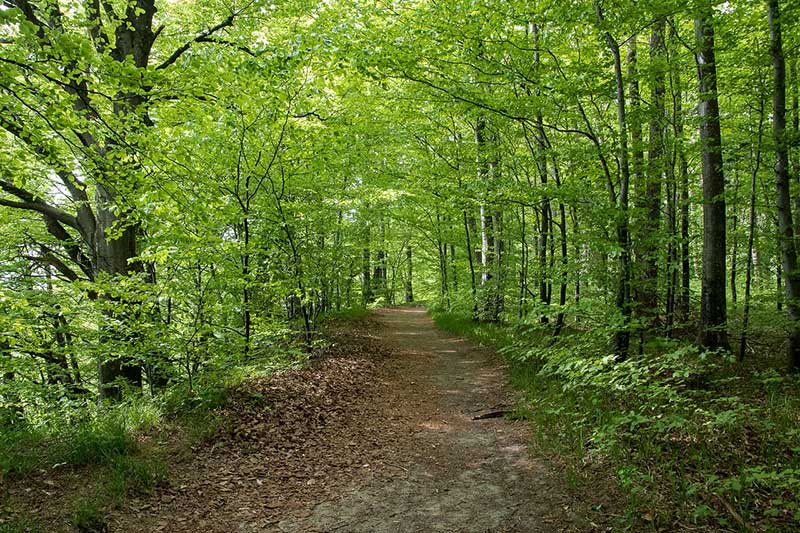 While trees are an incredibly diverse group of organisms, there are two main categories that many of these species fall into: coniferous trees or deciduous trees. In this article, we’ll learn about deciduous trees, and how they are different from their coniferous counterparts. We’ll also introduce a list of many types of deciduous trees that you may or may not be familiar with already.

What is a deciduous tree?

Deciduous trees are different from coniferous trees for a number of reasons. The first and most notable characteristic of deciduous trees is that deciduous species have leaves that will fall at the end of the season, hence why the autumn season is called “fall”.

Prior to shedding their foliage, the leaves of deciduous trees will change colors for a short period. These leaves are typically broad and flat, whereas the foliage of coniferous trees are needle-like. Deciduous trees also bear fruit, flowers or seeds opposed to cones. 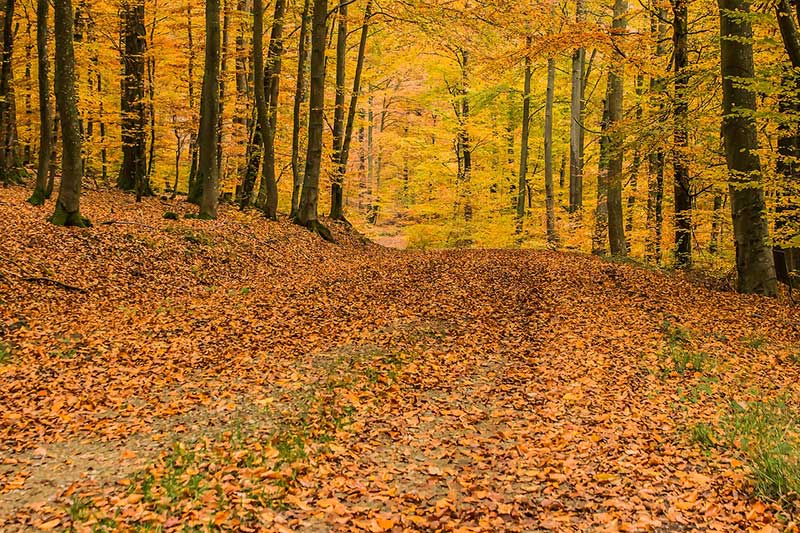 Where do deciduous trees grow?

Deciduous trees grow almost all over the world and can be found in both the northern and southern hemispheres. However, they typically require more temperate or moderate climates that have a winter season and rainfall throughout the year.

If you have never heard of this tree, you may have seen it as it is one of the most common and widespread trees in the United States. During autumn, the Red Maple’s leaves turn a brilliant red color, attracting “leaf peepers” or tourists interested in viewing the striking fall foliage of the Northeast. These trees grow throughout almost the entire eastern United States and up into southeastern Canada. 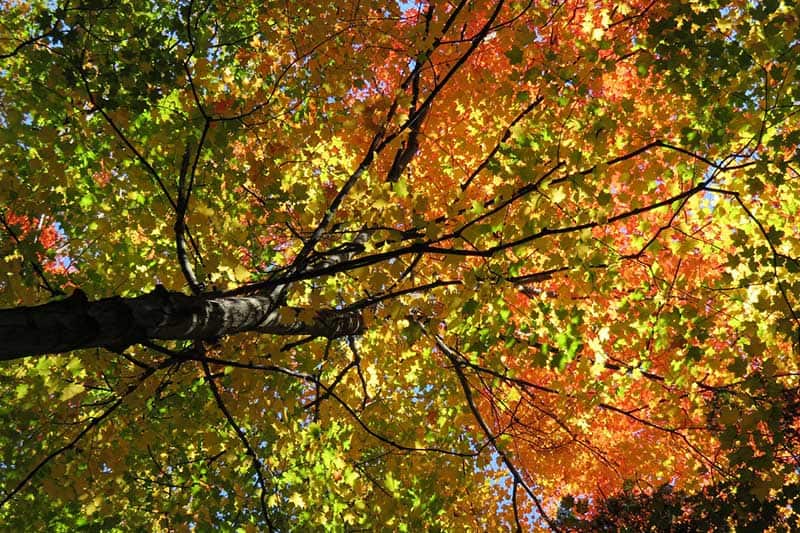 If you have ever had maple syrup on your pancakes, then you have probably enjoyed the sweet sap of the Sugar Maple. These trees are responsible for the primary production of maple syrup throughout Canada and the northeast United States. Sugar Maples also sport stunning foliage during the fall season.

The Silver Maple is an important tree for several species of wildlife. It grows throughout the majority of the eastern United States as well as southeastern Canada. The blossoming buds of Silver Maples are eaten by squirrels and their seeds feed chipmunks, birds and squirrels. Silver Maple hollows also act as shelter sites for raccoons, opossums, squirrels and birds.

It’s not surprising the Bigleaf Maple tree has large leaves, in fact their leaves are the largest of any Maple species growing up to nearly a foot across. Bigleaf Maples grow along the coast of California and the Pacific Northwest up into British Columbia, Canada. They are commonly used as lumber in furniture making.

The White Oak gets its name from the color of it’s wood when it has been finished, which is a pale, ashy color. White Oak trees are long living trees and can live for up to 300 years. They occur through much of the eastern United States, however they only grow as far north as southern Maine and as far south as the Florida Panhandle.

You may also like:  The 4 Layers of the Rainforest (With Diagrams)

Black Oak trees share much of their distribution with the White Oak tree, however they do not tend to grow as far north as White Oaks. Northern Black Oaks are fairly small, and grow on average to be 66-82 feet tall, while their southern counterparts grow up to nearly 140 feet in height.

Blue Oaks are found only in California where they grow near the coast as well as in the foothills of the Sierra Nevada mountains. These oak trees are uniquely drought-tolerant and grow well in dry soil with ample sunlight. Instead of dropping their leaves in the fall, Blue Oaks often drop their leaves during the summer.

The Balsam Poplar is a fairly short lived, but fast growing tree found throughout a few northern states as well as much of Canada, stretching as far west as Alaska. It has a strong scent, similar to the Balsam Fir tree. The wood from the Balsam Poplar is softer and is often used for pulp in the paper making process. 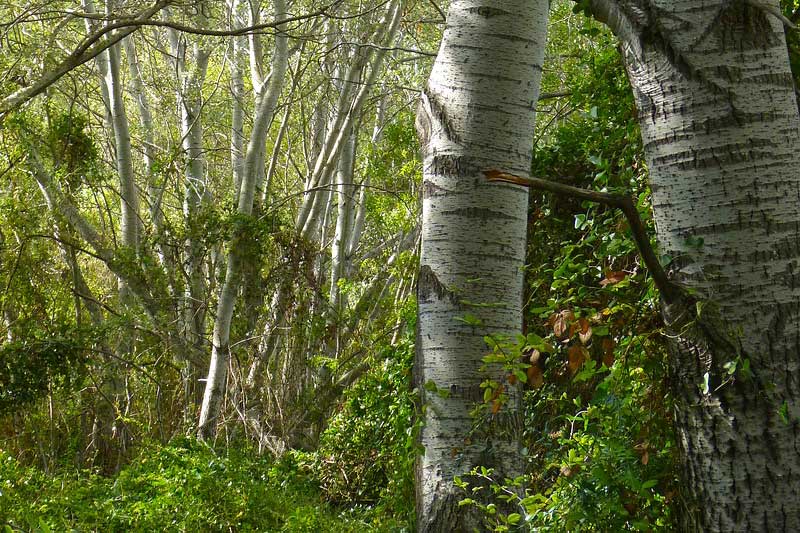 The White Poplar is actually native to Europe and Northern Africa, however it has since been introduced to the United States where it grows in 43 out of 50 states. It has done incredibly well as an invasive species, and for this reason has been banned in the state of Connecticut. It is able to hybridize with the Common Aspen tree, creating the Gray Poplar.

Eastern Cottonwood trees grow throughout much of the eastern and central United States, but are typically most abundant in the midwest. They only grow in small pockets throughout the northeastern states. Eastern Cottonwoods grow exceptionally well along rivers and streams, with muddy banks creating the ideal conditions for germination.

Big-tooth Aspens go by several common names including the American Aspen, Canadian Poplar, or White Poplar to name a few. They are restricted to the northeastern United States, parts of the midwest, and southeast Canada. Their leaves have large teeth, which are the zig-zag ridges of the edge of the leaves, which is likely where their common name comes from.

Quaking Aspens are actually the most widely distributed deciduous tree throughout North America, where they grow from as far south as central Mexico and are far north as Canada and Alaska. In the United States, Quaking Aspens occur most commonly through New England and west to Minnesota. They get their name from the tendency for their leaves to shake or quiver. 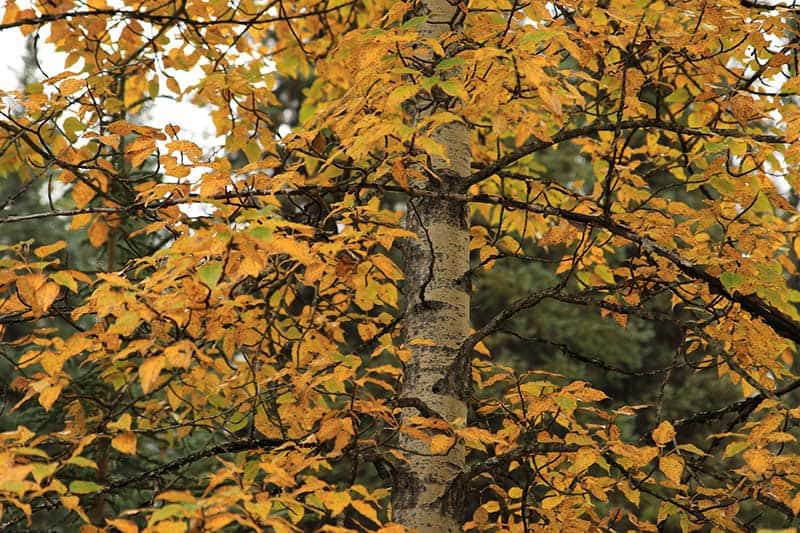 The Yellow Birch is native to the northeast where it grows along the Appalachian mountains as far south as Georgia. These trees are food sources for deer, moose and rabbits that nibble on the twigs. Yellow Birch are commonly used to make flooring, furniture, and even toothpicks.

Contrary to the name, there is nothing inherently sweet about the Sweet Birch Tree, in fact they are not nibbled on by deer like the Yellow Birch is. They grow as far north as Southern Maine along the Appalachians down to Northern Georgia. There is quite a bit of overlap between the Sweet Birch and Yellow Birch, and many people confuse them for one another.

You may also like:  When Do Rhododendrons Bloom In the Smokies?

While Paper Birch trees are used as pulp in papermaking, their common name actually comes from their bright white bark that peels away in layers almost like paper. These trees grow best in very cold climates, and they are distributed throughout the northern United States, Canada and up into Alaska.

Typically, Crabapples aren’t associated with being sweet, but the small, round fruits that grow on the Sweet Crabapple tree are often used in making apple preserves or ciders. These trees grow almost exclusively in the Great Lakes region where it grows best in moist, nutrient rich soil.

Most people have probably enjoyed the fruits of a Black Cherry tree, which are a perfect balance of tangy and sweet and are great for making jams, pies and tarts. These fruit trees occur throughout nearly the entire eastern United States, but they also grow down as far south as central America.

The American Sycamore tree is a historically relevant tree. It was under the shade of an American Sycamore that the agreements and terms of the New York Stock Exchange were agreed upon in 1792. These trees grow throughout the eastern United States growing as far north as southern Maine and as far south as the Florida Panhandle, with trees occurring as far west as Texas.

Not to be confused with the word “beach”, American Beech trees do not actually grow along the coast, but instead in forests alongside Sugar Maple and Yellow Birch trees. They do not grow well in areas with pollution or high salt concentrations in the soil. The American Beech grows throughout the eastern US and in southeast Canada.

The American Sweetgum tree is one of the most common hardwood trees in it’s distribution of the southeastern United States. These trees grow as far north as southwestern Connecticut and in the United States, as far south as central Florida. However, they also grow in patches throughout Mexico and central America. 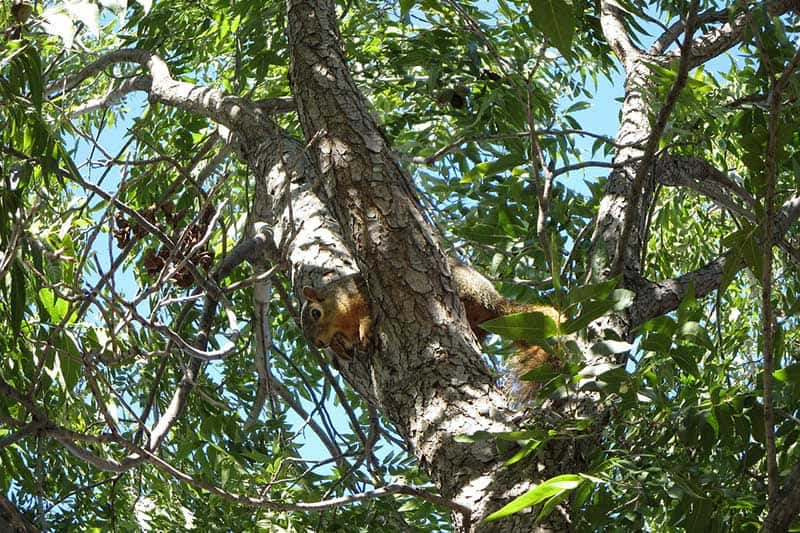 You can thank the Pecan tree for its beloved autumn dessert, Pecan pie. Pecans on their own make a nice, nutrient rich nut perfect for snacking. These trees grow in the Mississippi River region however the majority of the world’s pecans are collected from Pecan trees in Georgia, Texas, New Mexico and Mexico.

Bitternut Hickory trees are a species of pecan tree, however their nuts are enjoyed by wildlife rather than humans. The wood from Bitternut Hickories is used as lumber as well as for smoking meats. These trees grow throughout the eastern United States, excluding most of New England and Florida.

The American Ash tree is a significant tree as it’s lumber has many uses. It is actually thought to be one of the most commonly used trees for everyday use and is utilized to make flooring, handles for tools, lobster traps and even the bodies of electric guitars. These trees are widely distributed throughout the Eastern United States and extreme southeast Canada. American Ash trees are also naturalized in Hawaii.

The Blue Ash is native to the Midwest and Bluegrass region of Kentucky as well as along the Nashville Basin in Tennessee. These trees are sadly critically endangered, with population numbers dwindling. They are threatened by an invasive beetle, the Emerald Ash Borer which infests and subsequently harms Ash trees.

The American Basswood is a quick growing tree, it grows at a faster rate than many other American Hardwood trees. It grows throughout the Northeast and many parts of the Midwest, as well as in southeastern Canada. It produces flowers that are important for several species of nectar eating insects. These flowers are also very pleasantly fragrant.

If you have ever had the opportunity to visit Central Park in New York City, then you have almost definitely laid eyes upon an American Elm. There are over 1,200 American Elms in Central Park, making up over half of the trees planted in the park. These trees are common in landscaped parks, monuments and across university campuses. They grow throughout the entire eastern half of the United States north of central Florida.

Roughleaf Dogwoods are small trees, typically growing to about 20-25 feet tall. They are distributed throughout the Great Plains and Midwest, however these trees are rarely found in natural settings. Instead, they are typically used in landscaping or for ornamental reasons. That being said, Roughleaf Dogwoods are incredibly important for wildlife that use them as shelter.

Black Walnut trees are important sources of food and lumber. The wood from a Black Walnut tree is dark and easy to work, and their nuts are commonly used to make desserts. It grows well near rivers and is distributed throughout the southern Great Lakes region, to the east coast, south towards Florida and as far west as South Dakota. 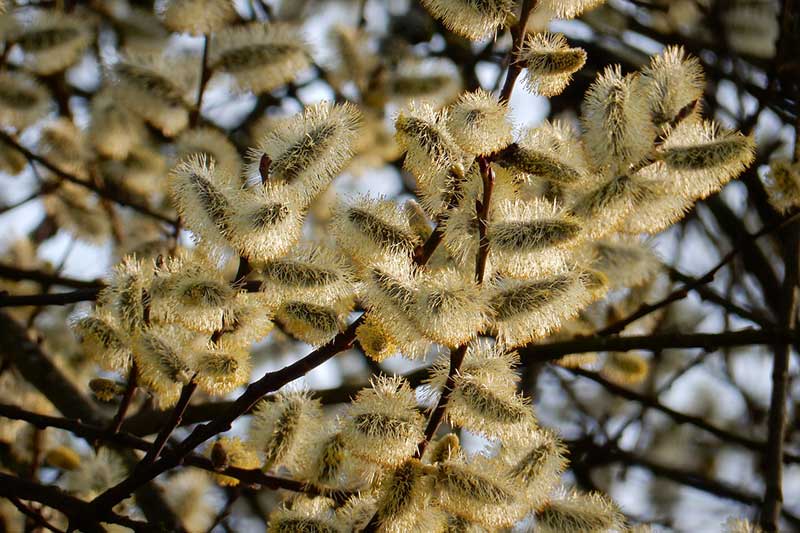 The Pussy Willow is a mix of a shrub and a small tree that grows up to 20 feet tall. They grow throughout the Northeast and Great Lakes region, up into southern Canada. Flowering Pussy Willows provide pollen for bees and acts as a larval host for numerous species of moths.

The Common Hackberry tree is a medium-sized tree, growing 30 to 50 feet tall. They are distributed throughout much of the Midwest and grow as far north as southern New England and as far south as South Carolina. Hackberry trees produce small berries that are eaten by many species of birds and small mammals.