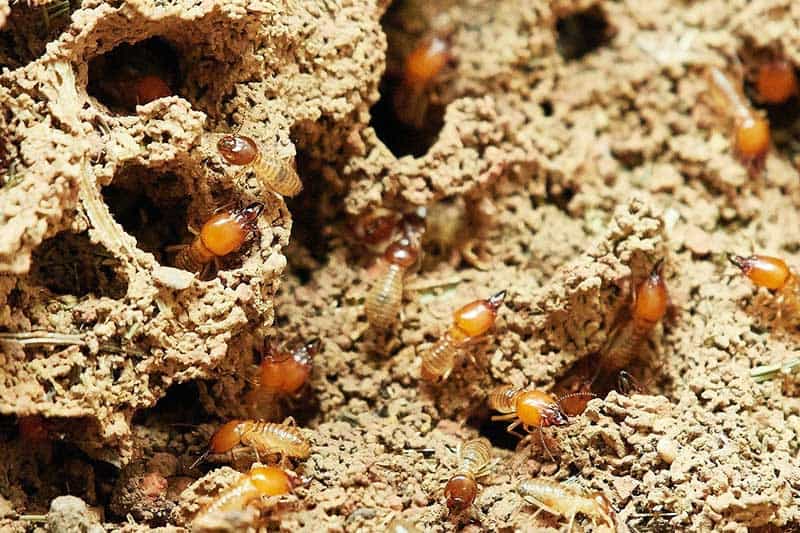 Not every type of wood-eating insect is really a pest, but some can cause extensive damage. Unfortunately, insects that eat wood can be found everywhere, on every continent except Antarctica, so there’s no escaping them.

I​t’s important to remember that wood-eating insects perform vital ecological functions, and they aren’t merely pests. They’re crucial to the health of the ecosystems they live in.

Here are some of the most common insects that eat wood. 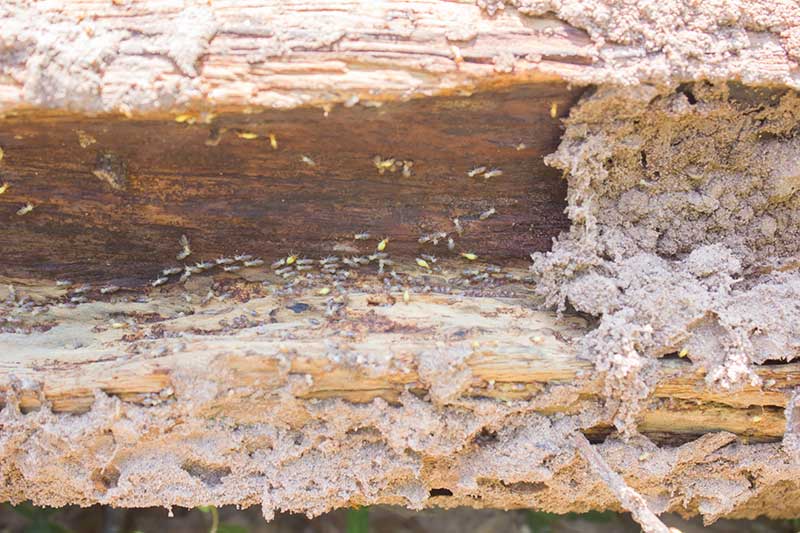 Undoubtedly the first wood-eating insect that comes to mind for most people, termites live on every continent except Antarctica, and they’ve been around since the Jurassic period. Like ants and bees, termites are highly social, living in colonies with clear worker and solider castes, along with a queen. Unlike ants and bees, termites also have kings- mature males who breed with their queens, and who don’t die right after mating as ant and bee drones do.

I​n fact, termites aren’t closely related to the other social insects- their closest relatives are cockroaches. Not all termites eat wood, but a large percentage of them do, and wood-eating termites live all over the world. Only the workers eat and digest the cellulose, and they are responsible for feeding the soldiers, the king and queen, and the juveniles.

T​his is a large family of beetles that includes many different species. In some species, the larvae eat wood, while in others the adults eat wood. In all cases, they can cause a lot of damage. They prefer to attack trees that are dead or dying, which makes them very important in forest ecology. They help remove dead trees and create space for new trees to grow.

T​hey also help to recycle the nutrients from dead trees, and are one of the most important scavengers of wood. Adults often lay their eggs inside the wood, where the larvae will eventually have to bore their way out. Because the life cycle can often be more than a year, it’s common for cut lumber used in construction to have beetle eggs in it, which hatch after the wood has been used in furniture or home construction. 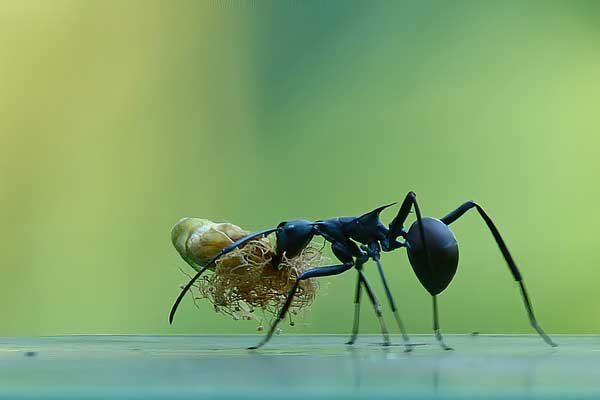 Carpenter ants are on this list because their chew wood, but it actually isn’t a source of food for them. Instead, they chew it up, and spit it out. Why? Because they live in old, dead or dying trees and logs. Their nests consist of large galleries chewed out of the wood, connected by tunnels. They do commonly infest buildings, where they can cause a lot of structural damage.

Carpenter ants eat a liquid called honeydew, which is secreted by aphids. To ensure they always have a supply of honeydew, they actually farm these aphids. They create habitat for them inside their nests, bring them food, and protect them from predators.

You may also like:  15 of the Most Muscular Animals on the Planet 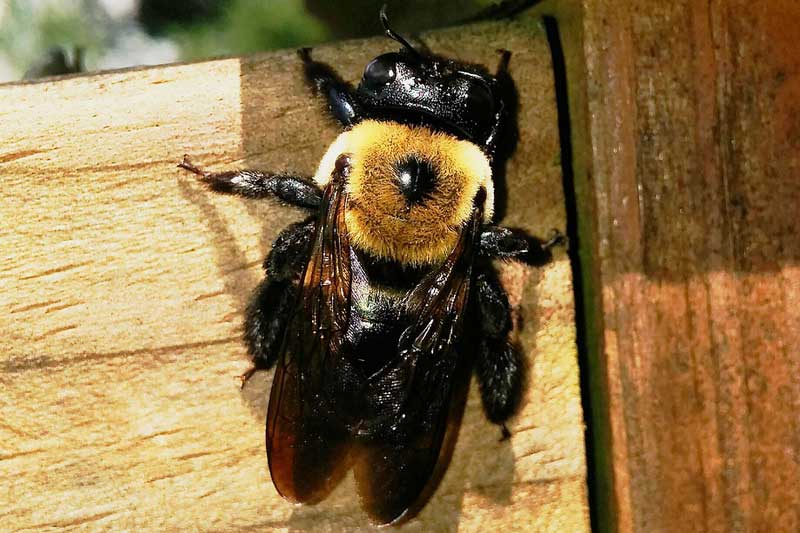 T​here are nearly 500 species of carpenter bee, living all over the world. Most them are solitary, rather than living in large hives. Like carpenter ants, they don’t eat wood for food, but rather chew through it to build their nests. They burrow into dead wood, making one entrance that branches into multiple tunnels, leading to the cells where they lay their eggs and raise their larvae.

Carpenter bees look a lot like bumblebees- they have large, fluffy bodies, and they’re very docile, rarely stinging unless they’ve been heavily provoked. Males have no stinger, and so they’re harmless. Like other bees, pollen and nectar are their primary sources of food.

Horntails, wood wasps. or horntail wasps, are a group of solitary wasp species identified by the large, spike-like protuberance at the end of their abdomen. Adults lay their eggs in trees, and when they hatch, the larvae bore their way deep into the trees. They’ll live inside the tree for two or three years.

Strangely, while these larvae bore through the wood, they do not eat it. Instead, they eat a fungus that’s deposited into the wood along with their eggs. The fungus grows and develops long with the larvae, and provides their nourishment. Shortly before they develop into adults, they bore back towards the surface, until they’re just beneath their bark. Here they build their pupa and grow into adult wasps before burrowing the rest of the way out.

T​here are seventy species of powderpost beetle, and they can be major pests. Their larvae bore into wood, leaving a distinctive pile of sawdust-like powder outside their bore holes. The starch content of the wood is what sustains the larvae, as they grow and mature for several months or years, depending on the species.

In some species, the infestation only becomes clear after the adults bore their way back out of the wood. If an infestation of powderpost beetles goes unnoticed long enough, the larvae can easily reduce the inside to the wood to nothing more than powder, ruining the structural integrity. 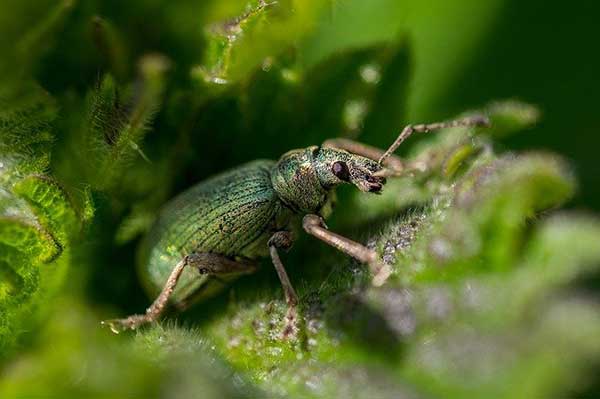 Weevils are easily recognized by their long, narrow snouts. There are over 97,000 species of weevil, and not all of them eat wood. Many of them are infamous agricultural pests like the boll weevil and the maize weevil, which can ruin entire crops.

T​he wood-boring weevil, for instance, eats nothing but wood. However, unlike most weevils, and unlike every other insect on this list, it doesn’t represent a pest to humanity. That’s because, while it eats wood, it only eats wood that has been predigested by a fungus. In other words, it eats rotten wood, so it doesn’t infest building or furniture.