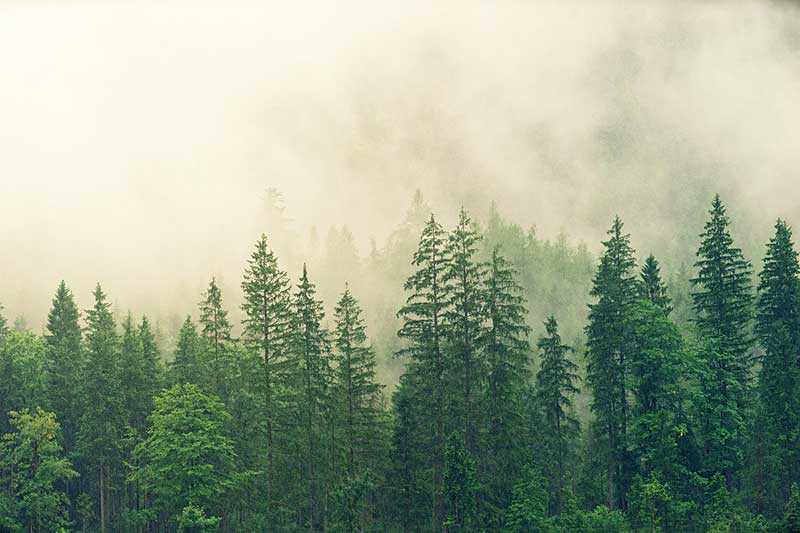 It doesn’t take a botanist to know that there are many different species of trees. Almost all trees fall into one of two categories, deciduous trees and coniferous trees. In this article, we’ll look at examples of 30 types of coniferous trees, some of which you will probably recognize!

What is a coniferous tree?

Where do coniferous trees grow?

Most conifers live in the Northern Hemisphere in temperate or cooler climates. Many of the trees within boreal forests are conifers, which thrive in colder climates. However, there are some types of coniferous trees that grow in tropical and subtropical climates.

The majority of coniferous trees are found throughout North America, Europe, and Asia.

The Sugar Pine is the largest and tallest species of pine tree. Additionally, cones from Sugar Pines are longer than all other types of coniferous trees. The Sugar Pine has a smaller distribution and can only be found in the mountainous parts of Oregon and California, but occurs as far south as Baja California.

The Red Pine Tree is native to New England and other Northern States like Michigan, Wisconsin and Minnesota where it is the state tree. Red Pines may also be found scattered throughout parts of the Appalachian mountain range and in Southeastern Canada.

Longleaf Pine trees are somewhat unique to other pines on this list as they are from the Southeastern United States. It tends to grow in coastal or marshland habitats, however Longleaf Pines are actually endangered. Longleaf Pine trees were nearly wiped out during the 19th century due to demands for lumber, but conservation groups have dedicated efforts to restore Longleaf Pines.

The Pitch Pine tree is kind of the ugly duckling of Pine trees. In fact, it is hardly used for timber due to the fact that the trunks and branches of Pitch Pines are normally crooked and abnormally shaped. These trees grow throughout much of the Eastern United States and are able to capitalize on environments with acidic, sandy, and low nutrient soil.

You may also like:  Do Pine Trees Grow From Pine Cones?

The Loblolly Pine is one of the handful of coniferous trees that can be found in the southern United States. These trees are capable of growing very quickly, growing up to two feet per year. Loblolly Pines grow in swamps and marshlands throughout much of the southeast and are actually one of the most common species of tree in the United States.

Slash Pine trees grow in high densities in Florida and Georgia, but also grow in South Carolina and as far east as Louisiana. This species can also grow as far south as the Florida Keys, where most other coniferous trees do not. The timber from Slash Pines is remarkably strong, and has historically been used to build naval ships.

The Sand Pine is an endemic pine tree, native to Florida and coastal Alabama. In Florida, it grows throughout much of the peninsula and coastal regions along the panhandle. Sand Pines are integral parts of the Florida scrub ecosystem, where it is one of the few tree species able to survive in the sandy, arid climate of scrubland.

The Colorado Pinyon, also known as Pinyon Pine, is a drought-resistant tree, allowing for it to survive in arid regions throughout the Southwest. It grows throughout Colorado, Wyoming, Utah, Arizona, New Mexico, southeastern California, and parts of Oklahoma and Texas. Colorado Pines rely on Pinyon Jays for seed dispersal, which peck seeds out of the cones and distribute them.

The Single Leaf Pinyon is a close relative to the Colorado Pinyon and can be found in many of the same states. These trees grow in the very southern tip of Idaho, Utah, Arizona, southwest New Mexico, and parts of southern California. While you may not be familiar with this species of tree, you may be familiar with their seeds- pine nuts which are roasted, salted and eaten as snacks.

The Black Spruce is widely spread and common in northern North America. Black Spruce Trees can be found throughout much of Canada, Alaska and in the northeastern United States. Black Spruce trees are very common in the boreal forests of their range. 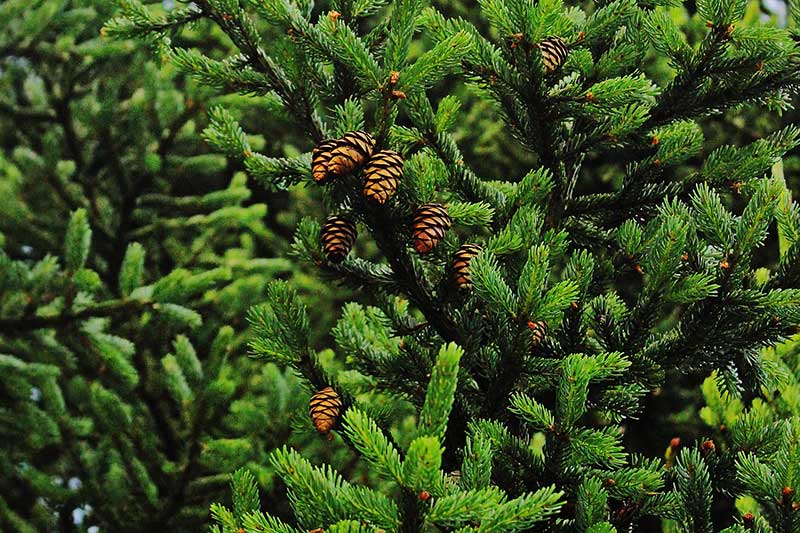 Most people are familiar with the Red Spruce without even knowing it! That’s because these trees are famously used as Christmas trees. Red Spruce trees have a small distribution restricted to the Northeast United states and Quebec and Nova Scotia. There are also some disjunct or fractured distributions of Red Spruce trees in the Adirondack mountains.

The White Spruce is made for surviving incredibly cold and extreme environments. In fact, White Spruce trees can withstand temperatures as low as ~60℉. This makes them perfect for living in the harsh conditions found in Alaska, much of Canada and the northern portions of Michigan, Wisconsin, Vermont, Maine and Newhampshire.

You may also like:  What are Knots on a Tree Trunk Called? 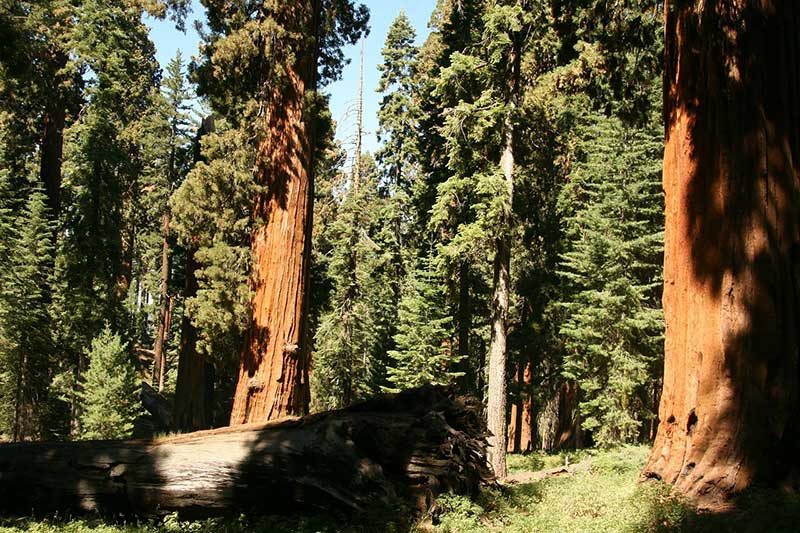 Giant Redwoods aren’t called “giant” for nothing! These trees are actually some of the largest in the world. Giant Redwoods can grow to be over 300 feet tall, however they typically grow to be anywhere between 164-279 feet tall. They also grow to be quite wide as well, with their trunks growing to diameters of 20-26 feet.

It takes an incredibly long time for Giant Redwoods to reach their maximum heights. The oldest specimen is thought to be anywhere between 3,200-3,266 years old!

Red Cedar trees are incredibly common and widespread throughout the Pacific Northwestern states (Washington, Oregon, and parts of California) as well as British Columbia, Canada. They are tolerant to shady areas and do not need much sunlight to survive, which likely explains their success in the Pacific Northwest.

What is the difference between deciduous and coniferous trees?
Every autumn, deciduous trees have leaves that fall off. Coniferous (aka evergreen) trees have needles or scales that do not fall off. 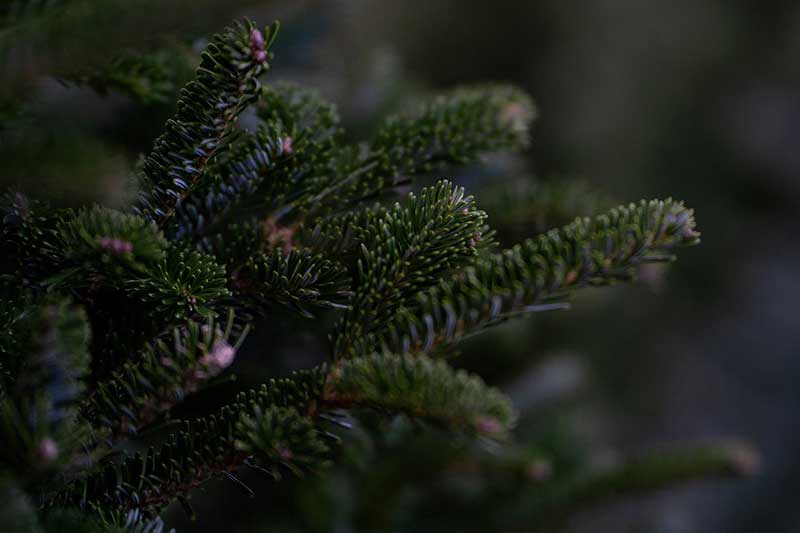 Balsam Firs are famously known for their piney, earthy scents that tend to be included in holiday scented candles. They are also commonly grown on plantations and farms to be cut down as Christmas trees. Balsam firs have broad distributions and can be found throughout much of the Northeastern United states and Eastern Canada. 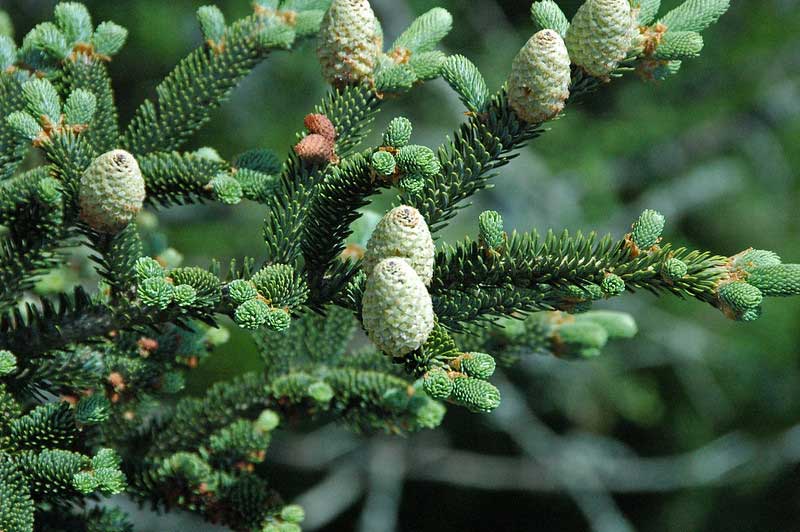 Fraser Fir trees are relatively small trees, growing to be 30-50 feet tall. These trees also have a small distribution and can only be found in a few small pockets of the Appalachian Mountains in Virginia, North Carolina and Tennessee. This has likely led to their conservation status, which lists them as endangered.

The Grand Fir Tree gets its name from it’s large size. In fact, the Grand Fir is thought to be the largest species of Fir tree and on average grows between 131-229 feet in height. Grand Fir trees grow in Washington, Oregon, and in Southern British Columbia, Canada. There are two variants of the Grand Fir, the Coast Grand fir and the Interior Grand Fir which are separated by the Cascade Mountains. 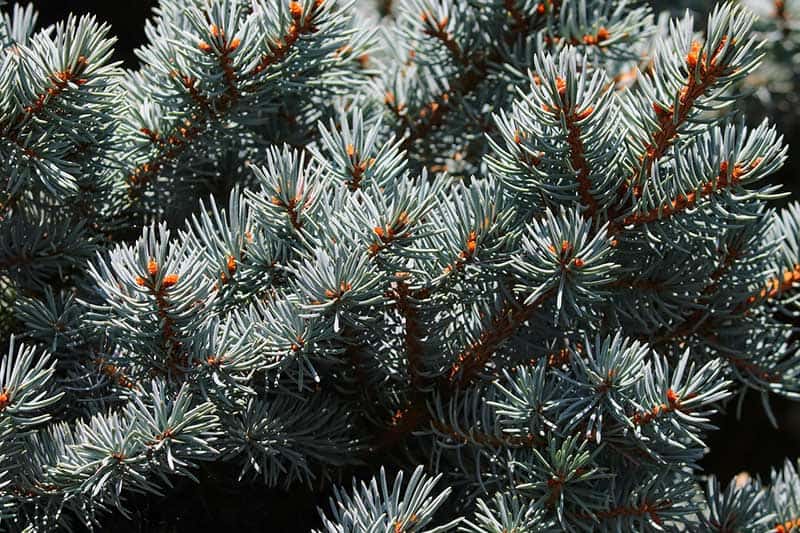 The Noble Fir is found almost exclusively along the Cascade Mountain range in the Pacific Northwest, however they also grow in small pockets along the coast in California, Oregon and Washington. Noble Fir trees are commonly grown and cut as Christmas trees and their wood is often used as timber and in paper making.

Tamarack trees are in a group of trees called Larch trees. Larch are interesting because they are considered deciduous conifers, meaning that they have needles that change colors and drop, depending on the season. Tamaracks are found in Northeastern America and throughout much of Canada. They thrive in moist environments like swamps and bogs.

You may also like:  Do Japanese Maples Lose Their Leaves in the Winter?

Subalpine Larch are incredibly hardy trees that thrive in very high altitudes. It can be found in the Rocky Mountains and in parts of the Cascade Mountains. They can survive freezing temperatures, with or without shade, and can grow even in fine, rocky soil. 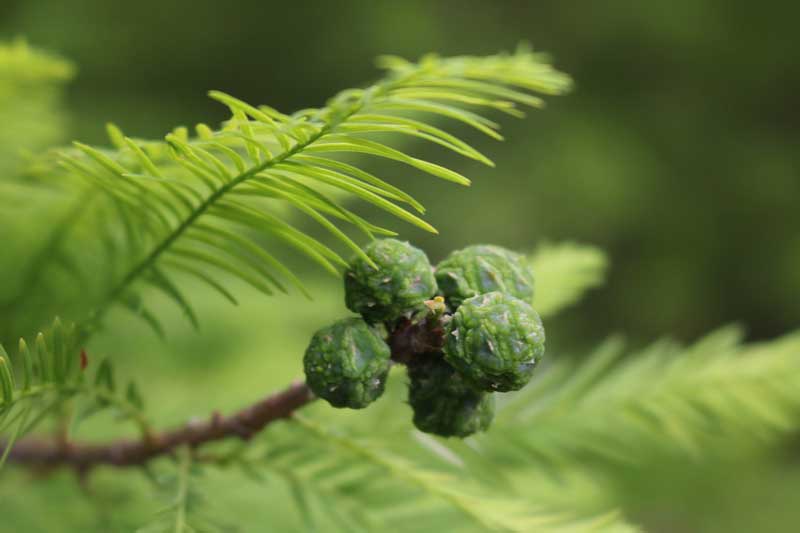 Bald Cypresses are another type of deciduous conifers that drop their needles in autumn. They are native to the Southeastern United states where they grow in swamps, bogs, ponds and even lakes. However, Bald Cypress can also tolerate drier soils, making them very hardy and adaptable.

Pond Cypress are very similar to Bald Cypress and are also native to the Southeastern United States, where they range south from Virginia, to Florida excluding the Florida Keys and as far west as Louisiana. They grow best in slow moving rivers, ponds and swamps. 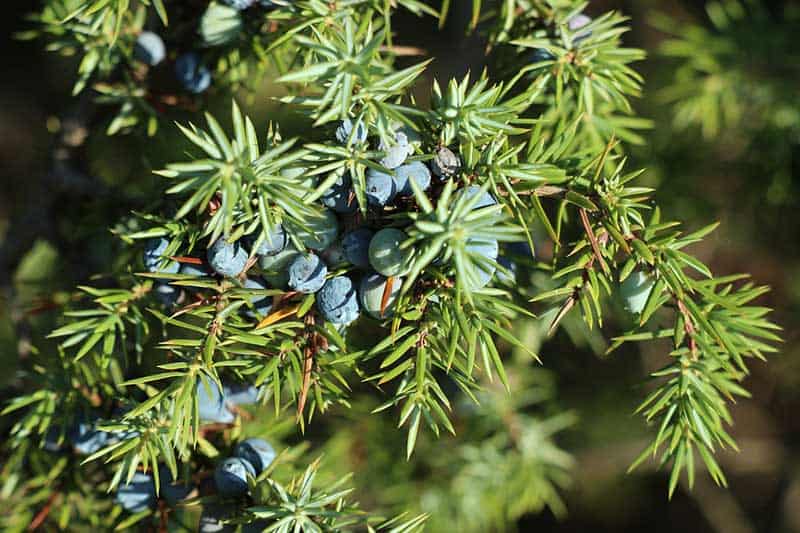 Common Junipers are essentially a mix between a coniferous tree and shrub. They are found throughout almost the entirety of Canada and there are pockets of Common Junipers sprinkled throughout the United States. They are commonly used for aesthetic purposes in landscaping. Perhaps more notably though, their berries are used in the process of making gin, which gives it a strong, piney flavor. 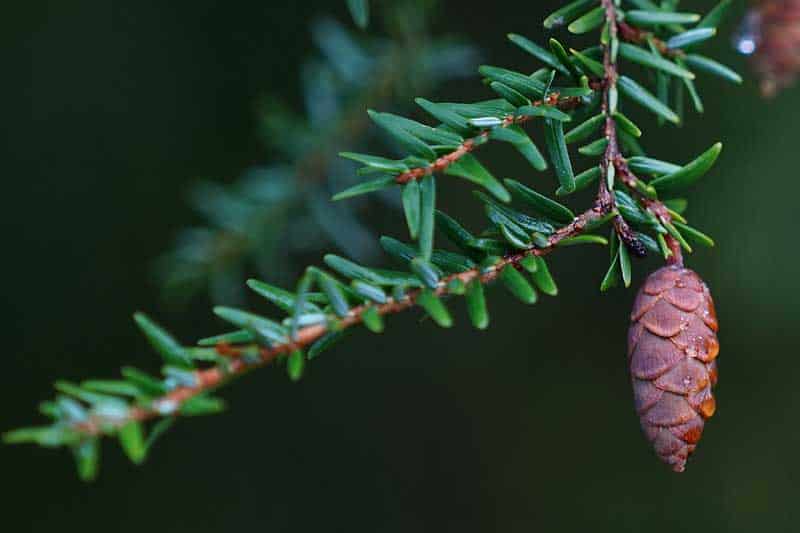 Next up is the Eastern Hemlock, the state tree of Pennsylvania. Eastern Hemlocks are types of coniferous trees that prefer cooler climates with relatively high humidity. They grow well in the shade and can be found along rocky ledges. These trees are found throughout the Northeast United States, and as far south as northern Alabama. Eastern Hemlocks also grow in Southern Quebec and Ontario, Canada.

Western Hemlocks do exceptionally well in shade, which makes them perfect for growing in the Pacific Northwest. They can be found in Northern California. Western Oregon, Washington, up into British Columbia, Canada and even as far north as Alaska. Western Hemlocks tend to outcompete other trees and are considered “climax species” which are organisms that can thrive even without ample resources.

The Carolina Hemlock has a restricted distribution, and is only found in parts of the Appalachian Mountain Range in Virginia, North Carolina, Tennessee, Georgia and South Carolina. Carolina Hemlocks are commonly used in landscaping, due to their deep root systems that easily allow for other plants, shrubs and trees to grow nearby.

The Mountain Hemlock shares a similar distribution to the Western Hemlock, growing from Northern California, through the Pacific Northwest and British Columbia, Canada and into Alaska. However, they have a much narrower range than the Western Hemlock. Additionally, they tend to grow at much higher altitudes and thrive high up on mountain slopes.