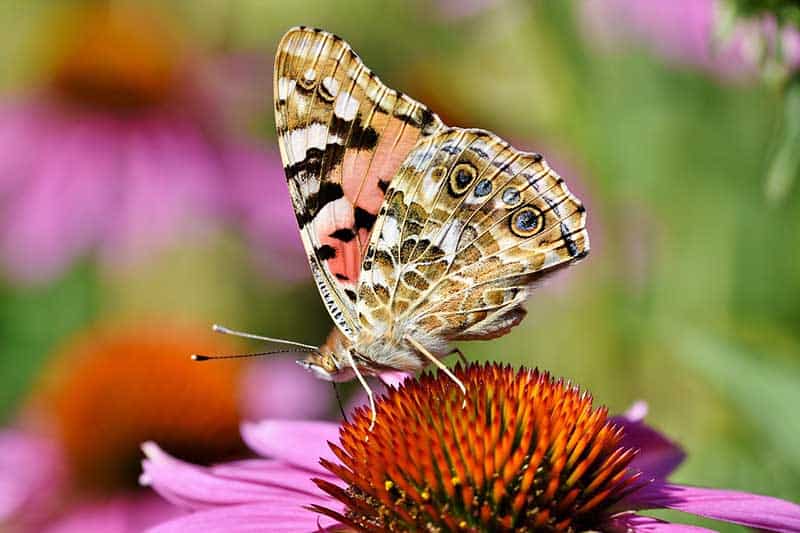 Butterflies are flying insects fascinating in many ways. For instance, their wings are covered in thousands of mini scales made of a protein called chitin. These scales are actually transparent and the colors you see are the light reflecting off the chitin! There are over 50 species of butterflies in Michigan, this article will detail information on 15 species in the state, including the plants they frequent and where you can find them.

The state of Michigan has plenty of habitats, including forests, grasslands, and coastal dunes, with nectar-producing flowers that are the main food source for many species.

Monarch butterflies are found throughout the state and have bright orange wings with black veins and borders. Their wingspan ranges from 3.3 to 4.8 inches and the orange color warns predators to stay away, especially since they are poisonous to vertebrates. Their poison comes from the milkweeds adults and caterpillars feed on.

Besides milkweed plants, such as the common milkweed, swamp milkweed, and butterfly weed, monarchs also enjoy other flowers, including:

The common buckeye butterfly is brown with one spot on their upper wing and two on their hindwings – these eyespots are suspected to help scare away predators. They also have orange bands on their forewings. Their wingspans are 1.63 to 2.75 inches.

You can find them mostly in the south of Michigan, with some populations in the Traverse City region and the peninsula. They frequent nectar flowers, such as zinnia, hydrangea, and butterfly bush. Their caterpillars enjoy host plants such as monkey flowers, snapdragons, false foxglove, and gerardia.

The painted lady butterfly has wingspans of 2 to 2.8 inches that are orange-brown with darker edges on the forewing. These butterflies are the most distributed species worldwide. In Michigan, you can find them in the southern counties, the upper peninsula, and the Traverse City region.

The viceroy butterfly has an orange and black upper wing, closely resembling the monarch. However, they also have a black line crossing their lower wing and a row of white dots on the black margin of their wings. Their wingspans are also smaller at 2.5 to 3.4 inches.

These butterflies prefer shrubby or moist open areas, such as wet meadows, valley bottoms, and swamp or lake edges. You can find them throughout Michigan except for some counties in the central region and west of the upper peninsula. Caterpillars feed on willow trees, including cottonwoods and poplars. Adults prefer nectar flowers, such as:

The question mark butterfly gets their name from the white question mark in the center of their light brown hindwing. Their uppersides are typically more orangey with black spots and their wingspans are 2.25 to 3 inches.

You can find these butterflies in wooded areas of the central counties in the upper peninsula, southern Michigan, and some in the Traverse City region. Adults prefer rotting fruit, carrion, dung, and tree sap but will also feed on flowers such as aster, milkweed, and sweet pepperbush. Their caterpillars live on host plants, such as:

The summer azure is a powdery blue butterfly with white patches, small black dots, and zig-zag lines. They are small, with wings spanning 0.9 to 1.12 inches. In Michigan, you can find them in the southern counties, the northernmost counties of Traverse City region, and Schoolcraft and Mackinac counties in the upper peninsula.

These butterflies prefer most nectar plants, including white clovers and chickweed flowers. Their caterpillars feed on host plants such as New Jersey tea and racemose dogwood.

The Milbert’s tortoiseshell butterfly, also known as the fire-rim tortoiseshell, is mostly black with orange patterns and a wide yellow and orange band on the edge of their wings. Their wings span 1.6 to 2.5 inches.

You can find these butterflies throughout the upper peninsula. They also live in most of the rest of Michigan, except some counties in the Grand Rapids and Lansing, and south Traverse city regions. Their caterpillars feed on nettle plants, while the adult butterflies prefer sap, rotting fruit, and flowers, such as goldenrods, lilacs, and thistles.

The northern crescent is mostly orange-brown with dark patterns and borders. Females are generally darker than males. Their wingspans measure 1.25 to 1.87 inches wide.

You can find their caterpillars on asters in the sunflower family and adults will feed on flowers, such as fleabane, white clover, and dogbane. They are mostly in the northern counties in Michigan, including the entire upper peninsula, near moist open areas.

There are 8 different swallowtail species in Michigan, including the zebra swallowtail butterfly. As their name suggests, their wings have black stripes against a whitish-green.

These butterflies breed in moist low woodlands near rivers and swamps. You can find them mostly in the southern counties in the Kalamazoo and Jackson regions. Their caterpillars prefer young shrubs, while adults will feed on various flowers including:

Red admiral butterflies are mostly black with reddish-orange bands on their wings and white spots at the tips of their upper wings. Their wingspans are typically 1.75 to 3 inches.

You can find these butterflies throughout Michigan, except in some counties in the Grand Rapids region. Suitable caterpillar host plants include nettles, mamaki, and pellitory plants. The adult butterflies will feed on tree sap and ripe fruit and sometimes visit flowers such as on the:

The American copper butterfly has a distinctive upper wing that’s a fiery orange-red, shiny, and has black spots. The bottom wing is lighter in color, sometimes grayish, with a orange zigzag near the margin. Their wingspans are 0.87 to 1.37 inches.

You can find these butterflies throughout most of Michigan, including the north and eastern counties in the upper peninsula. Their caterpillars prefer herbs in the buckwheat family, such as curled dock and sheep sorrel. Adults often feed on nectar flowers, including:

The coral hairstreak is typically dark brown or light brown with coral spots on the margin of their wings that span 1 to 1.5 inches. You can find them in most of the upper peninsula, Kalamazoo, Grand Rapids, Detroit, and Traverse City regions.

The mourning cloak has a distinctive bright yellow border on the margins of their purplish-black wings. They also have a row of blue spots on the inner side of the yellow border. Their wingspans are 2.25 to 4 inches.

These butterflies are probably one of the second-longest living species in North America, with adults living between 10 to 11 months. They are found throughout the state, except a few counties in central Michigan.

The adults prefer tree sap, especially from oak trees, and rotting fruit. It is rare for them to feed on flower nectars. You can typically see these butterflies feeding head down as they walk along tree trunks. The caterpillars also live mostly on trees, such as willows, paper birch, and cottonwood.

Dainty sulphurs are small butterflies with wingspans between 0.75 to 1.25 inches and are yellow with black or grayish markings. Their caterpillars prefer low-growing aster plants. Adults will feed on nectar plants, such as:

These butterflies have populations in a few counties in the Detroit, Kalamazoo, and Grand Rapids regions of Michigan as well as in Gogebic County in the upper peninsula. They typically migrate to Michigan from the southern states during spring and summer.

The common wood nymph is a brown butterfly with two large, dark and yellow-ringed eyespots on each of their upper wings. Their wings span between 1.75 to 3 inches.

You can find these butterflies throughout Michigan, especially in sunny grassy areas, such as meadows, prairies, and old fields. Caterpillars prefer grasses, such as purpletop, while adults feed on rotting fruits, tree saps, and some nectar flowers of grasses such as little bluestem and poverty oatgrass.