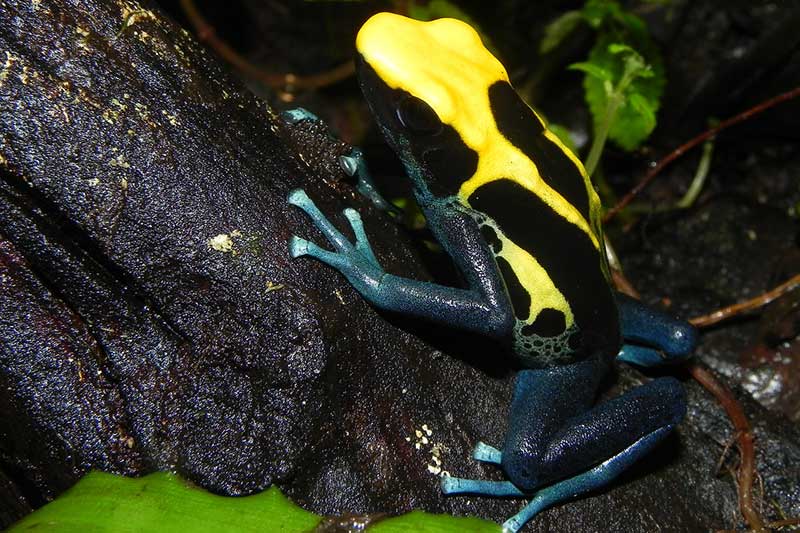 “The night is dark and full of terrors”, to quote Melisandre from George RR Martin’s Game of Thrones (or A Song of Fire and Ice). However when it comes to the world’s most poisonous animals, the day is also full of terrors. Some of the animals are so poisonous, a mere drop is enough to kill 10 grown men. These animals have few if any natural predators, everyone in the jungle knows better.

First let’s talk about the difference between poisonous and venomous, it all has to do with how the toxin is delivered. Venomous is when an animal injects poison through a bite or a sting. Poisonous is typically when the poison is transmitted more passively, like by eating or simply touching the animal.

Rattlesnakes for example are venomous and not poisonous, while some snakes are both venomous and poisonous.  Then there are some species of frogs that are poisonous and can transmit their toxins simply by being touched.

When you search for most poisonous animals in the world, most articles mix poisonous and venomous animals together. This article will go over some of the most poisonous animals in the world only. They don’t bite you to inject their poison, sometimes all you have to do is touch them while other times eating them is what transfers it. Many times they will have very bright colors that alert predators “don’t mess with me unless you want a swift death”. Other times they are highly poisonous yet very discreet and unnoticed.

4 of the most poisonous animals in the world

These little frogs are found in the tropical rainforests of Central and South American and are thought by many to be the most poisonous animals alive. Dart frogs belong to the family Dendrobatidae which has about 200 species in it.  As the name might suggest, their poisons are used by natives on the tips of their arrows and darts when hunting. In fact, you might even say that the poison from these little guys are crucial to some of the indigenous people’s ability to hunt.

Most species are very small, under an inch long, but some are closer to 2 inches in length. Their diet consists mostly of small insects like ants, termites, and mites. As it turns out, they derive their toxins from their diets. Many of the ants and insects they eat are themselves poisonous, however the dart frogs are able to safely store these toxins in their own glands without being harmed. Because of this fact, when they are in captivity and eat non-poisonous insects they become normal, non-lethal frogs.

The most toxic of all species of poison dart frogs is the one pictured above, the golden poison frog or Phyllobates terribilis. One frog is thought to carry about one milligram of poison, which is very very little. This micro amount of poison is so potent that it is enough to kill either 10,000 mice, 2 adult bull elephants, or between 10 and 20 adult people.

The Rough-skinned newt, or Taricha granulosa, is one several species of poisonous newts found in North America. This particular species of the genus Taricha is highly poisonous, reaches about 7 inches in length, and lives in parts of California and north all the way up into Alaska.

The neurotoxin they produce in their skin, tetrodotoxin (TTX), is the same toxin produced by the puffer fish and other types of poisonous marine animals. The newts primarily use their poison as protection from predators and it typically needs to be ingested in order to feel the effects of the toxin.

Most predators know that these newts are not to be eaten so they are left alone. The common garter snake however, which is also slightly poisonous, is known to be toxin-resistant and able to feed on the rough-skinned newt without any ill effects to the snake. However, research has been conducted where garter snakes were instead injected with the newt’s toxin and in those cases the garter snakes were killed.

In regards to the effects of their toxin, not a lot is known because they must be ingested in order to feel the effects. Having said that there is one report of a person dying from ingesting a rough-skinned newt in 1979.

The cane toad is a large ground-dwelling amphibian native to South and Central America. They have been introduced as invasive species in places like Australia and in the Caribbean islands where they are used as a form of pest control. Although the cane toad is now considered a pest itself in many places where it was introduced due to it’s ability to breed quickly and efficiently. Females will lay clusters of thousands of eggs at a time.

They grow to about 6 inches long and have a life span of about 5 years and as large toads they are able to eat a wide variety of insects, rodents, reptiles, amphibians, birds, bats, to name a few. They are very opportunistic eaters and have even been seen eating dog food and human garbage.

Cane toads have poison secreting glands on each shoulder (parotoid glands) where they secrete their toxins, known as bufotoxin, when threatened. The primary method of transference of the toxin is through ingestion. Simply holding or touching a cane toad will likely do nothing and have no ill side effects. If you were to eat one however  it would make you violently ill and could result in convulsions, paralysis or even death. They pose the largest threat to dogs and other animals that might attempt to eat them or even pick them up with their mouth out of curiosity. 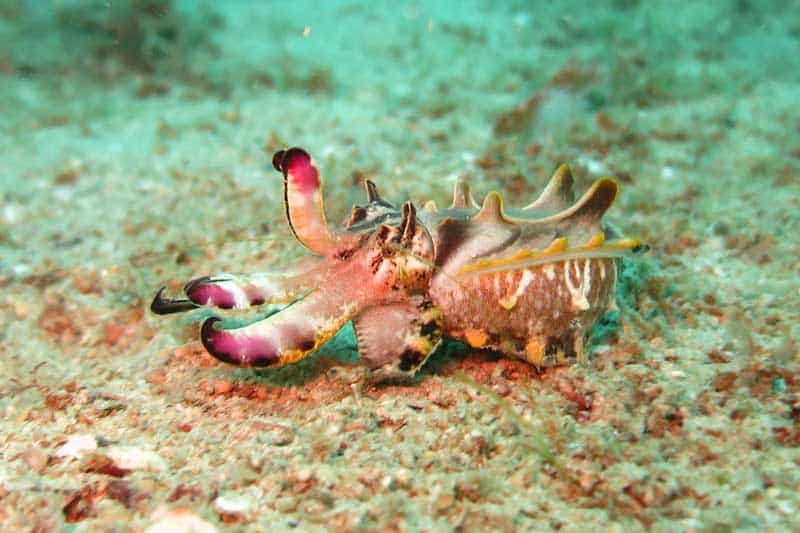 The Metasepia pfefferi, aka Flamboyant Cuttlefish, is a species of cuttlefish commonly found in the waters off the northern coast of Australia, southern New Guinea, as well as around the islands of Indonesia, Malaysia, and the Phillipines. They are only about 3-5 inches in length fully grown and are known for their highly toxic poison as well as their intelligence.  Cuttlefish are not actually fish, but are cephalopods and in the same family as squids and octopus.

They are most active during the day when they are out hunting for food, like crustaceans and fish. They are able quickly change colors and camouflage themselves using their complex nervous system that gives them complete control over each cell. This makes them effective hunters and allows them to easily stalk and take their prey by surprise.

They are the only species of poisonous cuttlefish and one of only 3 cephalopods that is poisonous. Not a lot is known about the flamboyant cuttlefish toxin except that it is very unique and has been compared to that of the blue-ringed octopus who’s venom is strong enough to kill 26 grown men with one bite. Their toxins are actually found in their muscular system so ingestion is how it is passed along but their bright colors warn predators to back off.