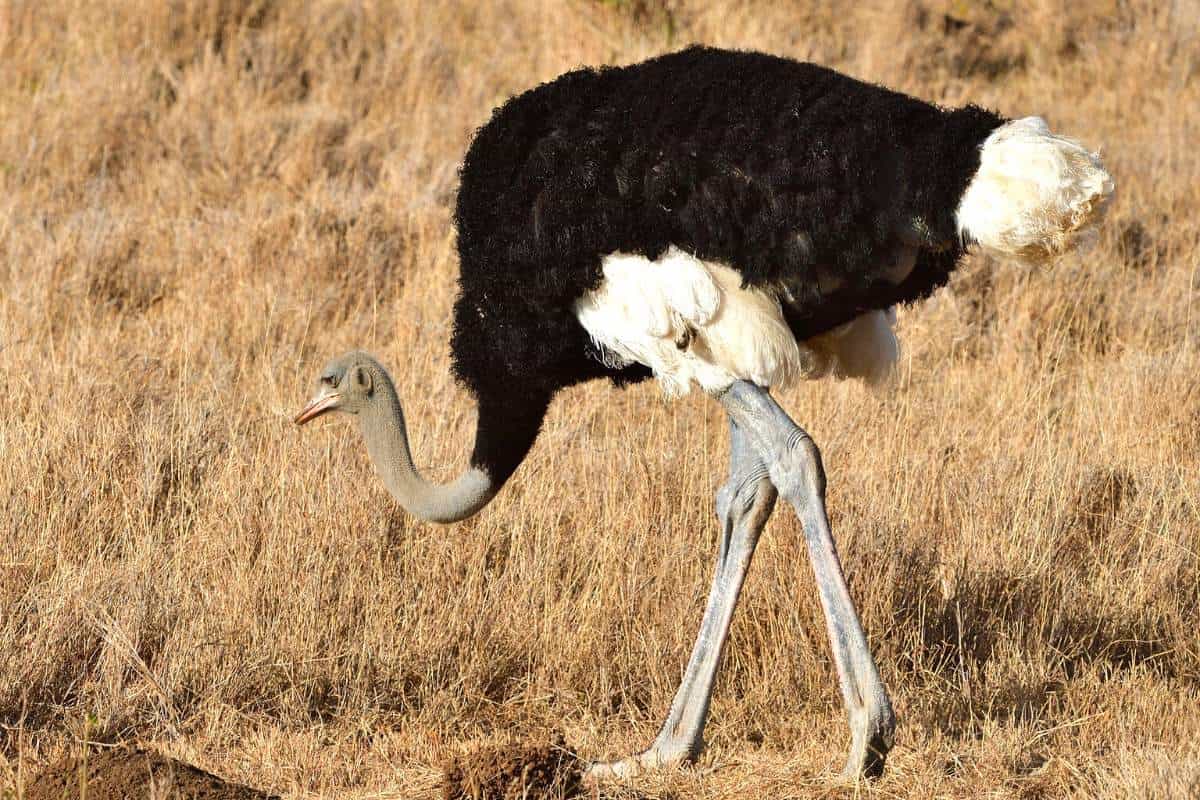 Ostriches are the largest birds on earth. These massive, flightless birds are native to the savannas and desert regions of Africa. They are flightless but have wings that they use to balance when running and make quick turns. This article details the two main types of ostriches and the remaining three subspecies of ostriches.

In the wild, ostriches live up to 40 years, but in captivity, they can live up to 70 years. Ostriches have strong legs and are extremely fast, reaching speeds of up to 43 miles per hour when sprinting.

Ostriches have the largest eyes of any other land mammal, with each eye being around the size of a billiard ball. This makes the bird’s eye bigger than its brain.

Despite popular belief, ostriches do not bury their heads in the sand. Instead, when threatened, they lay their long necks flat on the ground to make it harder for predators to see them from a distance. There are two main species of ostrich and a few subspecies.

Until the end of the 20th century, another subspecies of ostrich was known as the Arabian Ostrich. Unfortunately, due to poaching, this ostrich species became extinct.

The Common Ostrich is a large, flightless bird that measures between seven and nine feet in height and weighs between 220 and 350 pounds. Common ostriches are omnivores that eat roots, plants, lizards, insects, seeds, and other small animals. These large birds live in groups led by one male.

The dominant male and female alternate, incubating the eggs until they are ready to hatch. The male common ostrich has black and white feathers, and the female has brown or gray plumage.

This subspecies of the Common Ostrich is found in Kenya, Tanzania, and Somalia. These large birds are slightly smaller than other breeds of ostrich, weighing an average of 250 pounds. This subspecies stands out from others because of its pink neck.

The male’s neck becomes brighter red during mating season. Since the Masai ostrich lives in harsh climates, water is scarce. It gets most of its water from the leaves, flowers, berries, and seeds it eats. While the Masai ostrich is primarily herbivorous, it is also known to eat insects and small reptiles like lizards.

The Southern Ostrich is also called the South-African Ostrich or the Black-Necked Ostrich. It is native to the countries of South Africa, such as Zambia, Botswana, Angola, Namibia, and Zimbabwe. Though a subspecies of the common ostrich, this ostrich looks a lot like the Somali Ostrich.

You may also like:  11 Examples of Animals That Spit (With Pictures)

The North African Ostrich is also known as the Red-Neck Ostrich or the Barbary Ostrich. Unfortunately, this subspecies is critically endangered. While it once inhabited over eighteen countries in Africa, it can only be found in six today.

The North African Ostrich is the largest subspecies of the Common Ostrich, measuring close to nine feet in height and weighing up to 300 pounds. This subspecies has a pink neck and legs. Like other species, the male’s neck grows brighter during the mating season.

The males always have black feathers with white tips, and the females are brown or grayish in color. Like other species of ostrich, the females are slightly smaller than the males.

If you visit a zoo, the North African Ostrich is the most likely species you will see. This is largely due to worldwide conservation efforts to help restore the dwindling population.

Once considered a subspecies of the Common Ostrich, the Somali Ostrich has since been deemed a separate species. The Somali ostrich can be found in the Horn of Africa, which is the large peninsula in the eastern part of Africa that contains Somalia. These large birds have long necks and long legs.