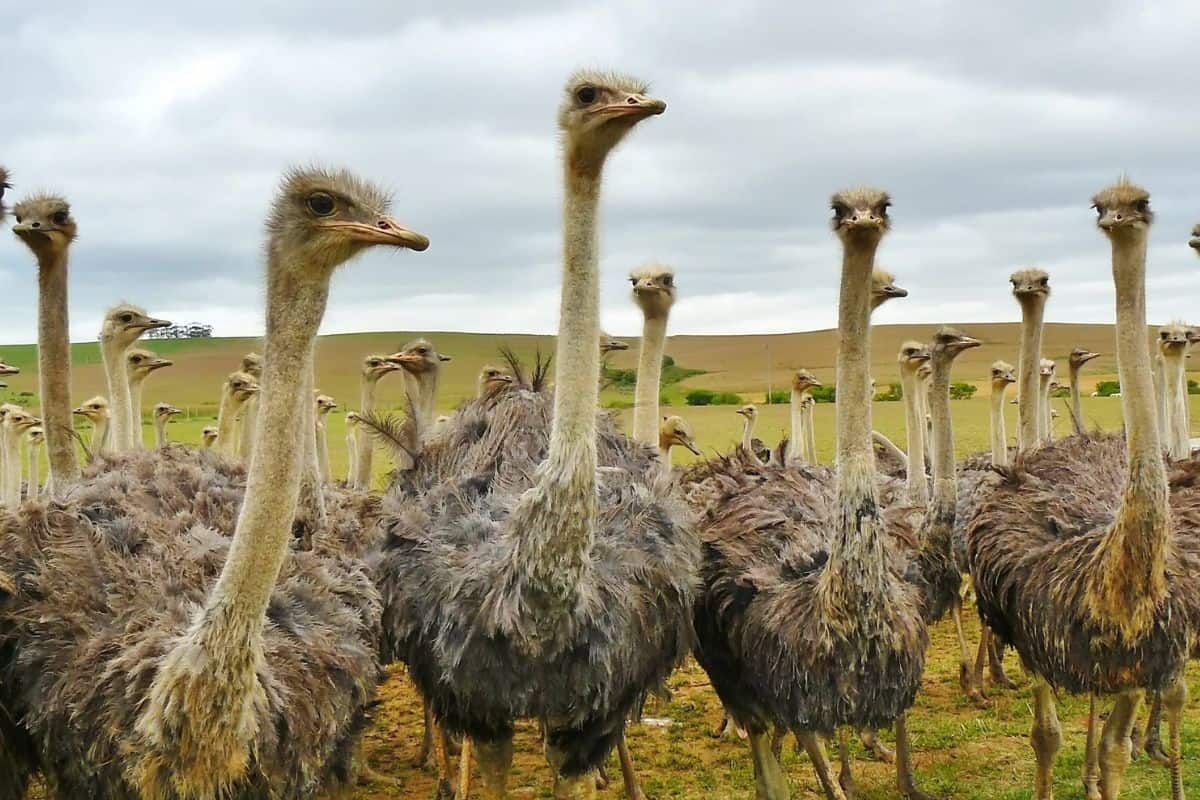 Birds come in all shapes and sizes, but there is something special about ostriches that sets them apart from the rest. They are the largest birds in the world, standing up to nine feet tall and weighing up to two hundred and twenty pounds. Their running speed is even more impressive – they can reach up to forty-three miles per hour.

This combination of size and speed makes ostriches quite formidable creatures. They can defend themselves against predators in the wild by running away or using their powerful beaks and kicks. Even though they aren’t typically considered dangerous, it’s still best not to anger one.

Ostriches have a few other unique features as well. For example, they can’t fly but can swim and have four knee caps – two on each leg. They also have three eyelids – the third being the nictitating membrane, which helps protect their eyes from the sun and dust.

Here is a look at some other birds that are similar to ostriches.

Emus are native to Australia and are the second largest bird in the world, behind the ostrich. They can reach up to 6.2 feet tall and weigh up to 132 lb. Like ostriches, they can’t fly, but they can run fast – up to thirty miles per hour!

What sets emus apart from other birds is their long necks and legs. They also have three toes on each foot, which helps them balance when they are running. Emus are fascinating creatures and are known to be very curious.

They will often approach humans out of curiosity, but they can also be aggressive if they feel threatened. While emus are similar to ostriches in many ways, there are also some differences between the two. For example, emus have shorter wings than ostriches, and their feathers are not as finely textured.

The Southern cassowary is a large flightless bird found in the tropical forests of New Guinea and northeastern Australia. It is the third largest bird in the world and can weigh up to 187 lb. Although it is most closely related to the emu, it bears a striking resemblance to the ostrich, with its long neck and legs and distinctive casque on its head.

They have a blue face and neck, with red and blue wattles hanging from the neck. The body feathers are black. Like the ostrich, the Southern cassowary is a powerful runner and can reach speeds of up to thirty-one miles per hour.

It is also an excellent swimmer and is known to wade into water to cool off. The Southern cassowary is known to be aggressive and even dangerous and has been known to attack humans.

The Greater rhea is a large flightless bird found in South America. It can reach up to five feet tall and weigh up to 60 lb. It is similar to the ostrich in many ways, including its long neck and legs, and is also a flightless bird.

You may also like:  15 Animals That Migrate (With Pictures)

The Greater rhea also has three toes on each foot, like the ostrich. However, it is distinguished by its brown and white plumage. The Greater rhea is a fast runner and can reach speeds of up to forty miles per hour.

It is also a good swimmer. This bird is found in open areas such as grasslands, swamps, and savannas. Its omnivorous diet consists of plants, small vertebrates, and insects.

The kiwi is a small flightless bird that is native to New Zealand. It is the national bird of New Zealand and is also its unofficial mascot. The kiwi is a national icon and is featured on the country’s flag.

They are unique birds distinguished by their long bill, stout legs, and feathers resembling hair. Kiwis are also the only bird in the world with nostrils at the end of their bill.

They are mostly nocturnal birds and spend most of their time foraging for food. Their diet consists of insects, worms, and small vertebrates. Kiwis can reach speeds of up to twelve miles per hour when running.

Rather than build nests, kiwis burrow into the ground, where they lay their eggs.

It has a small patch of white feathers on its belly, and its legs are long and pink. The Marabou stork is a scavenger bird and often feeds on carrion. It is also known to eat small mammals, reptiles, and amphibians.

This bird is found near water sources such as lakes, rivers, and wetlands. It typically nests in trees.

The Greater flamingo feeds on shrimp, crustaceans, and other small aquatic animals. It is found near lakes, marshes, and other wetlands. This bird typically nests in colonies of up to several thousand individuals.

They are similar to ostriches due to their long neck and legs but are distinguished by their pink or white plumage.

The Trumpeter swan is a large bird found in North America. It is the largest species of swan and can weigh up to 30 lb. They are one of the largest flying birds, with a wing span of up to 98 inches.

It is found near lakes, rivers, and wetlands. The Trumpeter swan is monogamous, meaning it mates for life. Both the male and female take part in nest building.

You may also like:  15 Animals That Live in Lakes (And Near Them)

The nest is a large mound of vegetation that is built near water. The female will lay anywhere from four to six eggs.

The Whooping crane is a large bird found in North America. It is the tallest bird in North America, measuring up to five feet tall. The plumage of this bird is all white, with black wingtips.

They are found in wetland habitats such as marshes, bogs, and swamps. They feed on various aquatic prey, such as frogs, fish, and invertebrates.

The Sandhill crane is a large bird found in North America. It is similar in appearance to the whooping crane, but it is smaller, measuring up to four feet tall. The plumage of this bird is light gray with a red cap on its head.

Like the ostrich, the sandhill crane has a long neck and legs. The sandhill crane is a migratory bird and can travel long distances. They mainly eat insects and fish, but they will also eat worms, frogs, and seeds.

These birds are known for their loud and distinctive calls, which can be heard up to two miles away.

The Gray heron is a large bird found in Africa, Europe, and Asia. It can measure up to four feet tall and has a wingspan of up to six feet. The plumage of this bird is mostly gray, with a white belly. It has a long neck and legs and a long, sharp bill.

The gray heron is a wading bird and can be found near bodies of water such as lakes, rivers, and wetlands. It feeds on fish, amphibians, reptiles, and small mammals—this bird nests in trees or bushes near water. The nest is made of twigs and is usually built in a colony with other herons.

Penguins, like ostriches, are flightless birds found in the southern hemisphere. There are eighteen species of penguin, and they are distinguished by their black and white plumage and their wing-like flippers.

Penguins range in size from the little blue penguin, which is about fifteen inches tall and weighs two to three pounds, to the emperor penguin, which is nearly four feet tall and can weigh up to ninety pounds. Penguins are excellent swimmers who spend most of their time in the water, hunting for fish, squid, and other marine animals.

Penguins typically lay two eggs at a time, which are incubated by both male and female penguins.