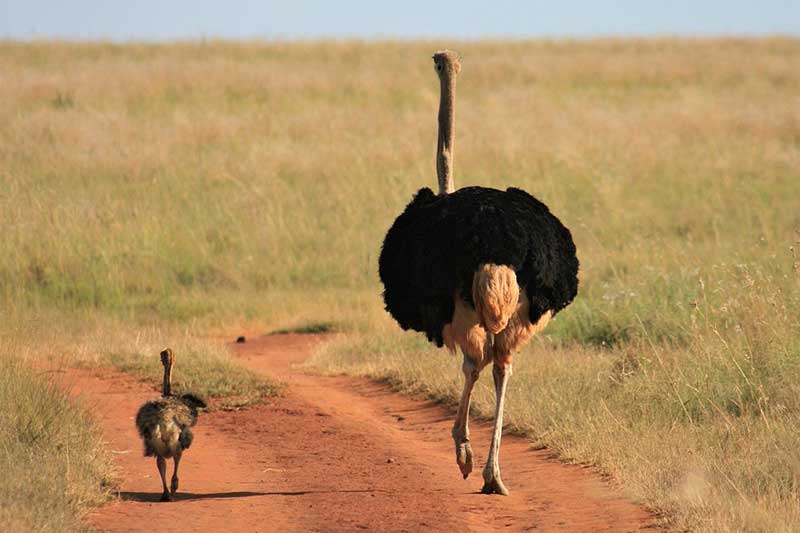 Ostriches are not only the largest flightless bird, they are the largest bird still in existence. They have a long neck, covered in downy feathers, and their bodies are black, brown, or grey, with either white or buff feathers on the tail depending on sex and subspecies. Their skin ranges from red to pink, and in addition to the long neck, they also have long legs that end in 2 toes. Ostriches are omnivores, supplementing plants and seeds with lizards and other small animals.

In height, emus are second only to the ostrich. They can reach heights of around 6 ft 3 inches. Their necks are pale blue,  with the occasional whispy patch of black feathers. Their bodies have shaggy looking brown feathers with black tips. They have 3 toes on each foot. Emus are omnivorous, but favor plants, enjoying a variety of grasses and flowers.

There are 17 species of penguins. They vary greatly in size, but all share common features. They walk fairly upright on two legs, with wings that resemble flippers held close to the body. They have dark backs with white fronts, which helps camouflage them in the water when they dive for fish and krill. Penguins have species-specific markings or feathers which along with their size helps to distinguish them.

There are 3 species of cassowaries and they vary slightly in appearance. They all have wedge-shaped bodies, dark feathers, and a bright blue head, which is topped by a hard casque.  The size of the casque varies by species and is an identifier. Other variations are the wattle which is red on the Southern cassowary, and yellow on the Northern cassowary. All cassowaries have 3 toes which they use as weapons. Cassowaries are fruit eaters, and their droppings help reseed the rainforests the call home.

These flightless birds are bout the size of a chicken. Their vestigial wings are hidden under feathers, and they do not have a tail. They have a long bill, which is sensitive to touch, and 3 toes on each foot. They have poor eyesight, but their other senses make up for this. Their color will vary based on the species. Kiwis are primarily insectivores but will eat some plants and seeds.

Rheas are very similar in appearance to ostriches, though they are substantially smaller, with light brown plumage. They have fairly large wings, which they spread while running to help them gain speed.

Where it’s found: The Galapagos Islands

The flightless cormorant resembles a stubby winged duck. It has dark brown or black feathers, blue eyes, and a hook at the end of its beak. They have dense hair-like feathers that produce very little oil. Unlike flightless birds in the Ratite family, which includes ostriches and emus, the flightless cormorant has the keel bone that is present in flying birds. This bone is greatly reduced in size, about 1/3 of the size it would be in a flying bird the size of the flightless cormorant. These birds dive for fish and eels like their flying cousins and spend a great deal of time drying out since their feathers are not waterproof.

The Kakapo is a large ground-dwelling parrot. It has mossy green feathers and the unique ability to pack on body fat. It is an adept climber and is able to live off of very little food. It subsists on a diet made up of mostly fruit, leaves, and seeds

This large duck is about the size of a goose, with the heaviest males weighing in at around 15lbs. Males have bluish-grey heads and necks, and white eye-rings,  while females are darker, with a reddish patch on the throat. These ducks live off of mollusks and crustaceans. The adults have no natural predators.

This midsized grebe, sports ornamental plumes on its head. It has a yellow lower bill and a white throat patch. Its diet consists mostly of fish, and it is an expert diver.