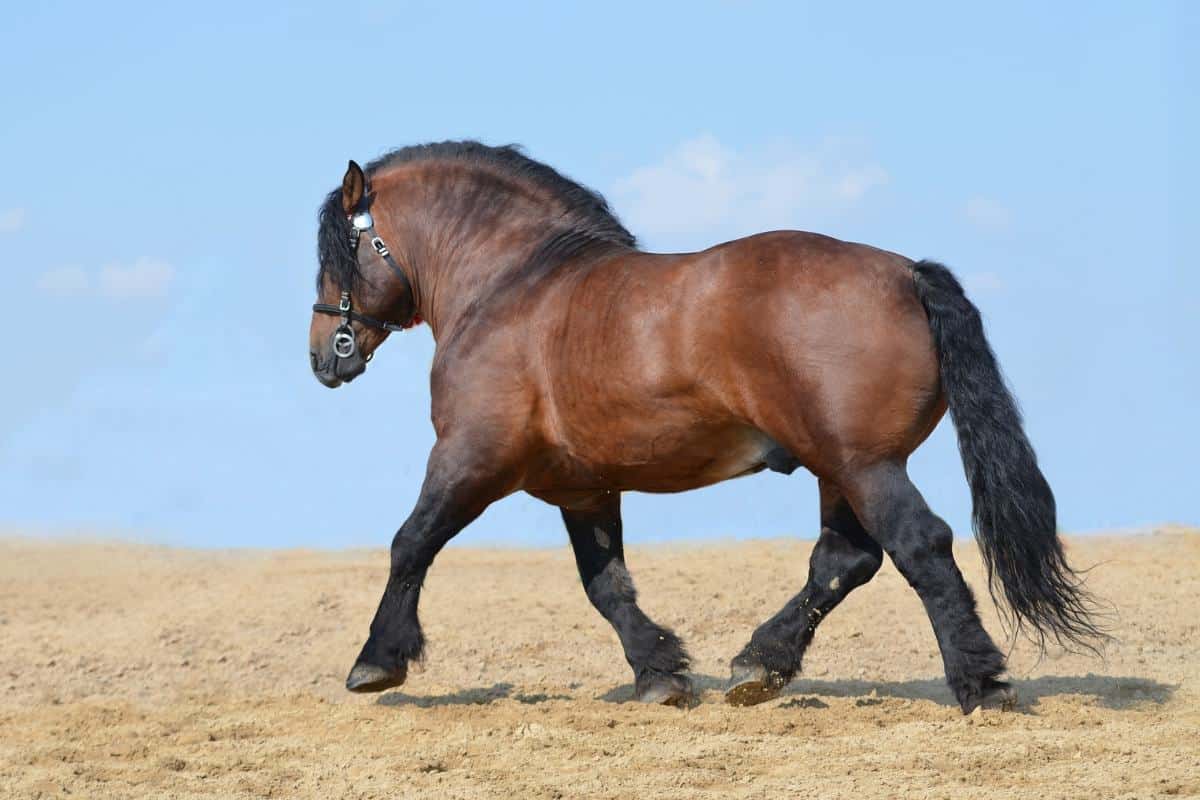 Have you ever seen an animal with a physique so powerful and awe-inspiring that it made your jaw drop? Nature has gifted some creatures with unbelievable muscular power. From the oceans to the jungles, they can race on land and even dive deep into the water. Wanna learn about the most muscular animals there are? You’re in the right place.

15 of the Most Muscular Animals

In this article, we’ll take a closer look at 15 of the world’s most impressive specimens when it comes to physical power and muscle mass. We’ll explore how their strength allows them to survive and thrive in their environments. So if you’re ready to be amazed by some seriously strong animals, read on.

The Belgian Blue is a cattle breed known for its double muscling—a genetic mutation that causes the animal to have extra muscles. Originating from Belgium in the mid-19th century, its excessive muscles are concentrated in the neck, shoulders, and hindquarters, giving it superior strength and a muscular, lean profile.

These animals can weigh up to 2,000 pounds and exceed heights of 6 feet at the shoulder. The impressive musculature of Belgian Blue makes them perfect for show competitions and for producing high-quality beef.

This marsupial, native to Australia, boasts short but muscled forelimbs atop its bulky body. Its chest is broad and muscular, with large hind legs that can support its massive frame and a thick tail that is used as a counterbalancing agent while it hops around.

There’s one red kangaroo whose muscles were so extraordinary he captured headlines around the world − Roger the Kangaroo. Standing over 6 feet tall and tipping the scales at a whopping 200 pounds (91 kilograms), Roger broke records and brought attention to his species’ plight in conservation and research efforts.

The giraffe is the tallest of all land mammals, with a towering height of up to 18.7 feet. Its neck alone can weigh more than 600 pounds and is supported by an intricate network of muscles and tendons.

This allows them to reach for food high up on trees, and male giraffes also use their powerful neck muscles in battles against other males. Its front legs are also longer thanks to the heavy muscular development at the base of the neck, while its hind legs are powerful and able to deliver powerful kicks.

These massive and majestic animals are renowned for their strength and durability. Draft horses have large, muscular chests, powerful hindquarters, strong legs, short necks, and broad heads. They weigh up to 2,000 pounds and can pull a staggering amount of weight—up to four times their body weight!

Their strength made them an indispensable part of history, as they were used to pull carts and plow fields for centuries before the invention of the automobile. Today, many draft horses are used for competition, showing, and pleasure riding.

Chimpanzees are the closest living relatives to humans. They are incredibly strong and agile, able to climb trees with ease and use their upper body strength to swing from branch to branch. They have short legs, incredibly muscular arms and shoulders, and large hands that they can use to grasp objects.

Their muscle is composed of 67% fast-twitch fibers, making them much more powerful than humans, with a maximum dynamic force and power output that is 1.35 times higher in a chimpanzee muscle than a human muscle of similar size. So if you ever encounter one in the wild, watch out!

The Boer goat is a domesticated breed of goat native to South Africa. It has impressive musculature, with large and thick hindquarters, a strong neck and shoulders, powerful legs, and a broad chest.

Its muscle mass makes it an ideal animal for meat production, as well as for show competitions. With its strength and agility, the Boer goat can easily traverse steep and rocky terrain, making it a hardy animal that is able to thrive in various environments.

Native to the Democratic Republic of Congo, Rwanda, and Uganda, mountain gorillas are powerful primates that live in the mountains. The males, also commonly referred to as silverbacks due to the silvery-gray fur on their backs, can weigh up to 500 pounds.

These powerful primates have a muscular body structure with large upper arms and legs and a strong chest and neck, allowing them to lift up to 1763 pounds. They will also chest-beat to show their dominance and strength when threatened.

Grizzly bears are among the most impressive animals in the world when it comes to strength. They have massive and muscular bodies, with powerful forelimbs and hind legs that can easily carry their weight of up to 800 pounds. Their thick fur gives them an added layer of protection from predators and harsh conditions.

In addition to their powerful physique, grizzly bears also have sharp claws and strong jaws that can easily crush bones. They are excellent swimmers and climbers, as well as being very agile on land.

Also known as the Gaur, this large and powerful animal inhabits much of South Asia. The males of this species can reach up to 6 feet in height and weigh over 2000 pounds.

The Indian bison has a muscular hump located just behind its shoulders, and it has a thick coat of brown fur. Male Gaurs are usually the larger and heavier of the two sexes, averaging about 9 ft. 1 in around their midsection.

The Gaur’s strength and agility allow it to navigate rugged terrain and fend off predators easily. It is also a fast runner and can reach speeds of up to 30 mph. The Indian Bison’s strength and resilience make it a formidable animal and an important part of India’s biodiversity.

The tiger is the largest of all wild cats and the third-biggest carnivore on land. Its captivating stripes are its most recognizable feature, but it’s also known for its powerful physique.

Their shoulders are exceptionally muscular and broad, and its legs are heavily muscled and powerful. Its longer, muscular hind legs give it the strength to leap up to 32 feet in a single bound. This apex predator can weigh up to 660 pounds and measure up to 10 feet from the tip of its nose to the end of its tail

You may also like:  14 of the Most Playful Animals (Pictures)

Bulldogs are best known for their strong jaw and muscular neck, but they also boast powerful shoulders and hindquarters. The bulldog’s body is compact and well-muscled, giving it great agility and strength.

Bulldogs are not just strong in appearance—they were originally bred for bull baiting and today have some of the strongest bite forces of any domestic dog breed. They can weigh up to 50 pounds and stand about 20 inches tall at the shoulders.

The green anaconda, which is native to South America, is the largest and heaviest of all known snakes. It’s a semi-aquatic species that can grow up to 30 feet in length and weigh over 550 pounds.

This incredible reptile has a muscular body, and its strength is no joke. Its powerful constriction force can reach 90 PSI, allowing it to coil tightly around prey and quickly suffocate them.

It also has a bite force of up to 900 PSI, enough to crush its prey. Aside from its physical power, the green anaconda is an excellent swimmer and can easily outmaneuver its prey in the water. On land, it can reach speeds of up to 5 mph.

The king of the jungle is renowned for its regal bearing and powerful muscles. Lions have incredibly thick necks, broad shoulders, and muscular legs that enable them to reach speeds of up to 50 mph. But this power isn’t just for show—it’s also crucial for surviving in their natural environment.

Their strong jaws, which produce over 600 pounds per square inch, can easily crunch through the bones of their prey, while their muscular bodies help them take down and overpower large animals such as wildebeests, zebras, and buffalo.

These large cetaceans are best known for their light-colored, bulbous heads and wide, muscular bodies. They can grow up to 20 feet in length, weigh up to 3,530 pounds, and live up to 50 years in the wild.

Belugas are also incredibly strong divers, able to dive over 1,000 meters deep and stay underwater for more than 10 minutes at a time. They also have the ability to use their muscular bodies to leap out of the water and perform spectacular acrobatics.

The American bison is one of North America’s most iconic and powerful mammals. Standing up to 6 feet tall and weighing over 2,000 pounds, these animals were once found in abundance across the continent. With their muscular front legs and bulky necks, they can push through dense brush and snow-covered trails with ease.

American bison are also incredibly agile, able to make sudden turns and sprint up to 35 miles per hour. Their impressive musculature has helped them survive and thrive in the wild for centuries.